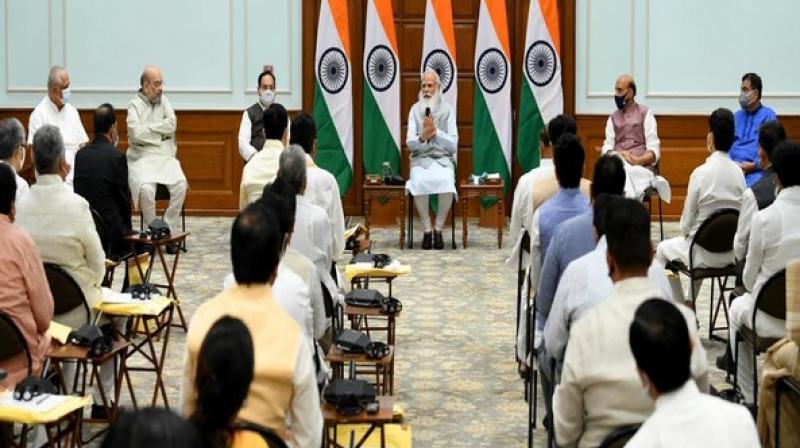 The Cabinet’s overhaul and its vast expansion is a tacit acknowledgment that the government was treading water and going nowhere in managing the crises that continue to overwhelm India. (ANI Photo)

The bigger the organisation the more complex and stumble-prone the process of recalibrating it to deliver on the manifest destiny of being the unassailable champion is what the meticulous exercise in expansion, face-saving resignations and reappointments looks like from a distance.

Seen through the lens of a state that delivered an electoral verdict which was as much an evaluation of 10 years of Mamata Banerjee’s government in West Bengal as it was of the seven years of Prime Minister Narendra Modi’s rule at the Centre and the BJP’s communally divisive Hindutva agenda and plans for domination on the basis of “one nation-one party”, the 43 new additions (including seven promoted to the Cabinet from junior ministerships) in the Union government have stirred up more trouble than cheer. The inclusions, ostensibly of the marginalised, but in fact of a section of problematic claimants, have compelled the BJP to issue orders that no one should violate the party line.

In plain terms, two new ministers of state, both political mavericks, John Barla from Alipurduar and Nishit Pramanik from Cooch Behar in North Bengal, have been clearly told that reiterating the demand for breaking up West Bengal by creating a new Union territory for the north districts is not the BJP’s officially approved objective and that they should watch what they say. The inclusion of Shantanu Thakur from Bongaon in North 24 Parganas as a representative of the politically divided refugee settlers from the Scheduled Caste Matua community and “namashudras” from across the border who ostensibly fled religious persecution, the West Bengal BJP leadership, namely its chief Dilip Ghosh, felt it necessary to issue a caveat. The appointment of Subhash Sarkar is a nod to the fact that there were old-timers in the BJP before the wave of defectors arrived and seized the limelight.

Basically, the BJP, at least in West Bengal, has temporised. It has included and given representation to the marginalised, which in an electoral democracy is a big positive as it works as an inclusion mechanism for people who had not been given a share in power. It has boosted the image of never represented or seriously powerless communities as it seems to have done painstakingly and methodically across the Hindi speaking heartland and in its stronghold of Karnataka and in the other states from where it has drawn its new ministers.
Looked at from the BJP’s local leadership’s rush to douse expectations in West Bengal, it does seem that the party hasn’t worked out how the raised status in terms of a place in the Modi ministry is to be converted into substantive action or policy or legislated action. BJP state president Dilip Ghosh equivocated on a key political issue, the inclusion of Hindu refugees and identification and exclusion of illegal Muslim migrants from across the border, by saying it was all up to Mamata Banerjee to implement the Citizenship Amendment Act and the National Register of Citizens. Given her emphatic refusal to do any such thing, it seems that the BJP has pushed the CAA-NRC to the back of the list of deliverables. It’s equally significant that Assam’s chief minister Himanta Biswa Sarma has modified his initial position on the CAA-NRC and Muslims; he has declared that old Muslim settlers were with him on identifying new illegals.

“Mainstreaming” the marginalised, converting one individual into an elite representative: is that enough? The question is fundamental to meeting expectations, where such expectations exist that the BJP is aware of and has a strategic position on. The question is equally important to policymaking over the next three years.

What, if anything, are the 27 new Other Backward Caste, 11 women, 12 new Scheduled Caste and eight new Scheduled Tribe ministers in the Modi Cabinet going to deliver for their specific constituencies? Having raised the status and stoked aspirations, the Modi government must have a plan to convert the newly bestowed prominence and the desires that go with it into something tangible that would then work to firmly bind the community’s loyalties to the BJP, in the state elections between now and 2024, and of course in 2024.

The Cabinet’s overhaul and its vast expansion is a tacit acknowledgment that the government was treading water and going nowhere in managing the crises that continue to overwhelm India’s population: containing the killer virus, providing health services, offering relief to the brutally affected poor as a consequence of the economy’s standstill or slowdown and cranking up the economy even as inflation threatens to spiral out of control.

The rejig focused on health, labour employment, education and petrol prices. The followup announcements on increased financial allocations for key problems, including farmers’ demands raised by the seven-month protest, the world’s longest ever such anti-government demonstration, was a concrete step at reassuring the sceptical and angry voter that the Narendra Modi government has shaken off its inertia.

The next step must be to revise the BJP’s narrative of being a civilising political force and protector of India’s glorious and ancient culture. The reality of political violence and the deliberate exercise of building up pressure that erupts in such violence is not limited to West Bengal, regardless of the BJP’s campaign that such violence had been tamed everywhere else.

The West Bengal election verdict was a clear sign that the voters in this state, and voters in Uttar Pradesh’s panchayat elections, that coincided with the West Bengal elections, was not well disposed towards the Modi government’s inaction. Voters in Uttar Pradesh, which goes for Assembly elections in 2022, will not be convinced that political violence is a West Bengal monopoly. In 12 districts of Yogi Adityanath’s state, scenes of murderous clashes unfolded as India watched, including a video that went viral of a woman leader from Lakhimpur Kheri whose sari was pulled off for which the entire contingent of a police station have been shunted out.

The gap between lived experience and rhetoric has caught up with the BJP after West Bengal and Kerala. The visuals of super-spreader crowds at Kempty Falls in BJP-ruled Uttarakhand is incontrovertible evidence of a failure of governance. The gaps must be closed with better governance and Prime Minister Modi has to do it, not with optics of meetings to manage oxygen supplies but by nudging Union ministries to effectively administer and certainly not by blaming state governments or specific individuals for their misdemeanours. The bottomline is that in a game of big stakes, the principal player has to know how to think big.