Saeed Naqvi | From Warsaw to Kanpur: A tale of 2 cities

Parallels between the two episodes in Warsaw and Kanpur have risks 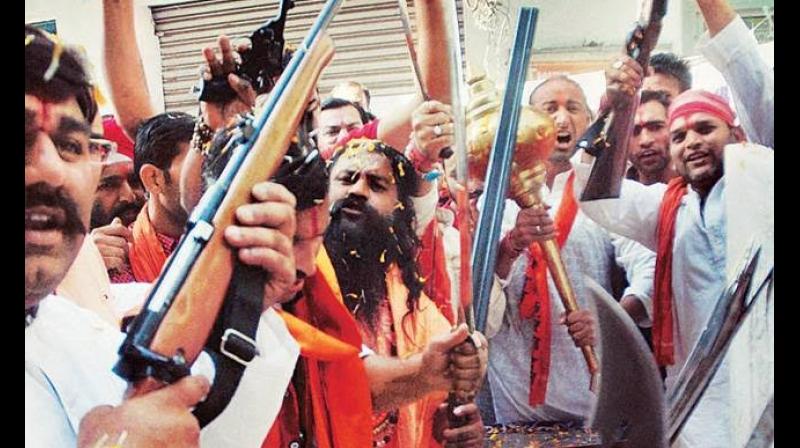 Polish filmmaker Krzysztof Kieslowski’s masterpiece Dekalog, a 10-part series, explores ethical issues raised by the Ten Commandments. In the eighth episode, Thou Shall Not Bear False Witness, 40-year-old New Yorker Elizibieta, who earlier translated the works of Sofia, a Polish ethics professor at Warsaw University, visits the university to attend the lectures of a teacher she obviously admires. In passing, the camera focuses on the cross she’s wearing, establishing her Roman Catholic Polish background. Trust my Uttar Pradesh obsession, the film directed my mind unexpectedly towards avatars of Brahminism I saw in Kanpur.

Elizibieta raises an issue in Sofia’s class which she continues even at Sofia’s apartment. It turns out that in 1943, when anti-Semitism had taken a murderous turn, a six-year-old Jewish girl had been left in Sofia’s apartment for protection. This child was Elizibieta. Sofia and her husband, practicing Catholics, flinched at the last moment: baptising Elizibieta was the only disguise that would guarantee protection from the Gestapo. Their faith was at risk of being compromised. This despite the fact that Sofia and her husband were progressives in the Resistance. Elizibieta, who found shelter with other progressive Catholics, was baptised, a fact which facilitated her passage to America in the care of Polish Jews migrating to what was then the promised land.

Did Sofia and her husband really face a dilemma? The choice was between saving the life of a child placed in their care by trusting Jewish parents or risking her life by rigid adherence to the Commandments Moses received from God.
Kieslowski’s portrayal of a bruising reality reminded me astonishingly of the December 1992 Kanpur riots after the Babri Masjid’s demolition.

Cameraman Kabir Khan and I were directed to a two-room house where a certain “Panditain” (widow of a Pandit or Brahmin) saved a Muslim woman from a rampaging mob that entered her quarters. “Where is Aisha Bi?” they demanded in deafening decibels, flourishing weapons. “I don’t know”, she said. “Can you swear by Lord Ram that you have not hidden Aisha Bi?”

Not only did she willingly swear but enhanced her credibility by touching a plaster head of Lord Ram above her bed. “I swear by that statue I have not hidden Aisha Bi in my house.” The mob, that had done its homework on Aisha Bi’s whereabouts, found itself unable to challenge the Panditain once she had sworn by Ram.

Once they had begun to slink away, the Panditain hurriedly removed mattresses, quilts, blankets, washed clothes from the top of a large window-size wooden trunk. She lifted the cover. The portly half-conscious figure of Aisha Bi, drenched in sweat, was lifted out.

Revert to Warsaw 1943. Sofia faced a dilemma. She made a choice, the consequence of which could well have been tragic. Elizibieta may well have ended in Auschwitz had other Catholics and Jews not collaborated. The Panditain of Kanpur faced no dilemma. She fell back on tact, distinct from a lie. The invocation of Ram’s name was an act of mercy here.

Parallels between the two episodes in Warsaw and Kanpur have risks. The debate will inevitably slide towards comparative religions, rituals. The times aren’t ripe for such debate.

How would the Urdu poet steeped in Sufism respond?

“Karein hum kiski pooja aur charhaen kispe chandan hum?/Sanam hum, daer hum, butkhana hum, but hum, barahman hum”. (Where do I turn for prayers? Where do I make my offering of sandalwood?/ I am His image, am the room for bowing to Him, the keeper of His idols,/ Indeed, I am the idol, the Brahman).
Waris Shah, the high priest of Dewa shrine outside Lucknow, was more succinct.
Asked, “Why do you not say your namaz regularly?”, Waris Shah replied: “Where is the space to go down in supplication?” The implication is: “He is in me” -- the essence of “Advait”, or non-duality.

The Kanpur riots yielded more sociological narratives of a different kind. A mob carrying trishuls, rods, axes and swords were blocked by a solitary man from entering a gated garden, where scores of Muslim families had taken shelter. The man’s name was Tripathi. In another area, an elderly lady, described by neighbours as Mishrain, threatened the rioters with construction bricks piled on her terrace. The mob retreated.

A certain Pandeji stretched his arms across a narrow lane to thwart an armed mob trying to enter a row of houses occupied by Muslims. Like many stories, the Kanpur story would have been canned and possibly forgotten. Since we were leaving for London in the next few days to film a feature on an Irish school teaching Vedic mathematics, Kabir’s edited copy of Kanpur also found its way into our baggage. Gopal Gandhi, who was then in charge of London’s Nehru Centre, selected the Kanpur feature for screening before a packed hall.

That Hindus helped Muslims during the riots was an obvious attraction, a sort of relief for an audience fed excessively on communal brutalities after the Babri demolition. But the edited episode on Kanpur shed light on another piece of sociology. Wherever armed gangs baying for blood were stopped from advancing towards Muslims, the individuals were a Panditain, Tripathi, Mishraen or Pandey -- all Brahmins, something not fashionable to mention in the caste convulsions boosted sky high by the Mandal Commission report. The point of emphasis is not that Brahmins alone are filled with the milk of human kindness to check bloodthirsty mobs. A different group wouldn’t simply have the self-confidence to confront a mob baying for blood. I write from my experience in Awadh and districts around Kannauj, where political opposition to Brahmins contradicts their social standing.