Agnivesh had given up a career as a professor in Calcutta to be a full-time social activist. His mission was to resist the RSS at all levels 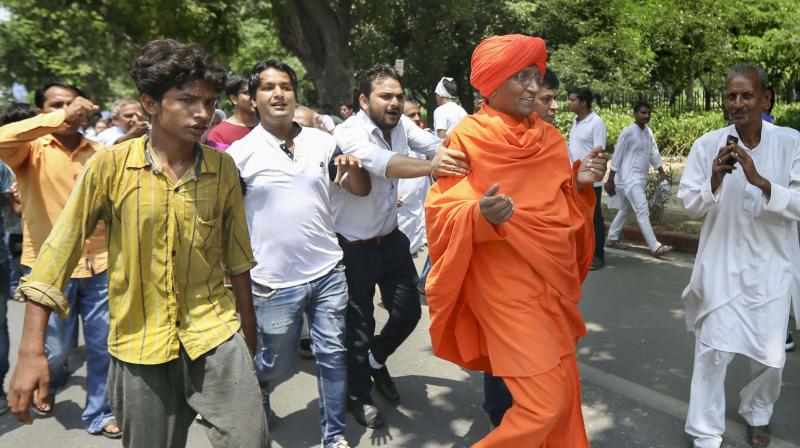 Union agriculture minister Narendra Singh Tomar is a worried man these days. On his home turf of Gwalior-Chambal, crucial Assembly bypolls are set to take place, which may establish the supremacy of Jyotiraditya Scindia as BJP’s iconic figure on Tomar’s turf.

Tomar, who holds the additional charge of panchayati raj and rural development, was embarrassed when a well-known party spokesman fumbled and failed to name him as the country’s agriculture minister.

The spokesperson, having roots in the BJP’s economic cell, reportedly took Radha Mohan Singh’s name, who was agriculture minister in the previous Narendra Modi ministry. Sources close to Tomar feel their leader needs more visibility if he has to counter Scindia within the BJP.

Congress chief Sonia Gandhi turned out to be smarter than her detractors. The 23 Congress dissenters who wrote a letter seeking inner party democracy are now perplexed by Sonia’s move to appoint the Congress Working Committee nominating some prominent dissidents who were asking for CWC polls.

Would Ghulam Nabi Azad, Anand Sharma and Mukul Wasnik muster the courage to turn down a CWC nomination? As per the party constitution, 12 members are required to be elected while an equal number can be nominated.

Last time when CWC polls were held, the party was led by Sitaram Kesri in 1997. Sonia is travelling abroad for her medical checkup and likely to skip the monsoon session of parliament.

In her absence, a six-member panel [without Rahul or Priyanka Gandhi] would officiate.

The monsoon session of Parliament is starting amid the Covid-19 pandemic. Ironically, when the House had met in March 2020, the chair had reprimanded members for wearing masks.

Six months later, wearing masks has been made mandatory. The seating arrangement is also bothering the Opposition as members are spread to galleries in order to enforce social distancing. How would they protest if access to the well of the House is denied?

Though the Uttarakhand state Assembly poll is scheduled for early 2022, the BJP has begun preparation.

Politically, the Trivender Singh Rawat government does not seem strong enough to return to power. So BJP strategists are looking for a “third front” to prevent the Harish Rawat-led Congress from edging the party out of power. The buzz is that Arvind Kejriwal’s Aam Aadmi Party is set to contest the hill state poll in a big way.

The presence of a third contender will be bad news for the Congress. The BJP is also reportedly promoting the Uttarakhand Kranti Dal, otherwise considered a defunct outfit. The calculations are that if AAP and/or Uttarakhand Kranti Dal get a few seats through cutting into Congress votes and anti-BJP votes, then a Haryana-like situation can bring the BJP back to power.

Jafferbhai Mansuri of Delhi Darbar fame is no more. Covid-19 took another toll. Jafferbhai was a legend in Mumbai as his biryani of the Delhi Darbar chain of restaurants was worth every paisa.

In 1973, Jafferbhai had founded his Delhi Darbar restaurant at Bombay's Grant Road, and by 2006 he became the Biryani King, having a chain of restaurants called “Jaffer Bhai’s Delhi Darbar” from Grant Road to Jogeshwari. The chain also owns several restaurants in the UAE.

Jafferbhai’s biryani was much sought after in wedding receptions. An unassuming and affectionate person, Jafferbhai used to keep a keen eye on his friends and acquaintances who were often given a packet of biryani and kebabs to relish at home.

Swami Agnivesh will be greatly missed. The social crusader in saffron was a spare time politician who did not get his due even in death, as most English-language newspapers did not carry his obituary.

Surprisingly, most Urdu dailies had news of his death on the front page with some editorials and lengthy obits.

Perhaps it was due to Agnivesh’s consistent opposition to BJP’s brand of Hindutva. A brahmin from Andhra, Agnivesh was a vocal Arya Samaji whose influence spread from Punjab-Haryana, Madhya Pradesh, Rajasthan to other parts of the Hindi heartland.

Agnivesh had given up a career as a professor in Calcutta to be a full-time social activist. His mission was to resist the RSS at all levels.