Opinion   Columnists  14 Jan 2022  Farrukh Dhondy | Is the party over for BoJo at last? Will Starmers get ready for No. 10?
Opinion, Columnists

Was this congregation of people in the garden of 10 Downing Street a prayer meeting? 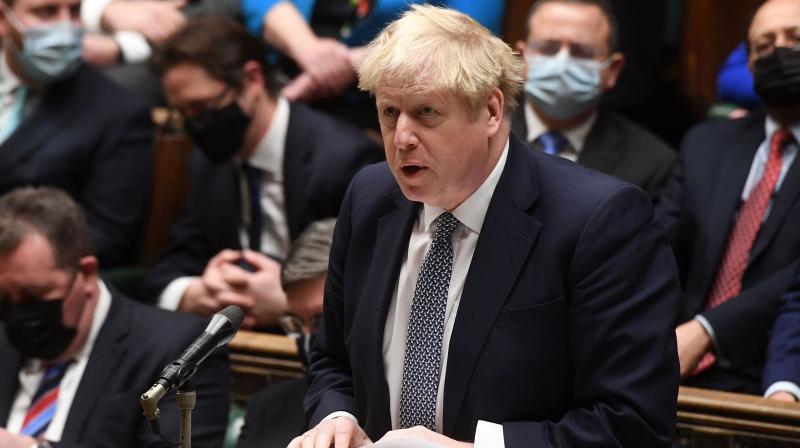 “A dropped handkerchief by your bed —
Is that a certain sign
A wish that you, finding it, were led
To restore to me what’s clearly mine?
But does the ‘favour’ bear perchance
The starting letters of my name
Which stand out plainly at a glance
Part of the dropping-hankies game?
From Hanky Panky, by Bachchoo

Is the party over? And is it over owing to several parties. Or perhaps it will be over when the Party comes to its senses and decides that these weren’t their parties and decides to part company with the participants?

What’s this all about? British politics, yaar!

Prime Minister Boris Johnson, acting on the advice of scientists and doctors, imposed a national lockdown against the spread of Covid-19 early in 2020. Part of the decree was that people should stay indoors except for exercise and meet no more than one person outdoors at a distance of at least two metres. People couldn’t have social gatherings or go to pubs and restaurants and certainly couldn’t hold gatherings in their homes.

Despite these precautions, thousands died of the viral infection. The scientifically endorsed diktat was inevitable. However, last week the media discovered that one of BoJo’s closest civil servants had issued an email in May, during that imposed lockdown, to a hundred 10 Downing Street staff and other associates, which said that after weeks of hard work and now with pleasant sunshine, they should congregate in the garden of the Prime Minister’s residence and should “BYOB”. This last is a known abbreviation for “Bring Your Own Booze”.

The media now claims that about 40 people answered the email by attending on the specified day at 10 Downing Street. There were snacks on a spread made available.

According to a few witnesses, who may have been guests or serving staff, BoJo and his wife Carrie Symonds were a part of the crowd. Was this invitation from the civil servant issued without BoJo’s knowledge, consent and indeed active initiation? Can you tell me, gentle reader, has the Pope converted to Scientology?

Was this congregation of people in the garden of 10 Downing Street a prayer meeting? Was it with the invitation going out to a hundred people, with the injunction to BYOB and the provision of snacks, a working session? And does Santa Claus wear soot-proof gowns?

Does the attendance of BoJo and Mrs BoJo with forty others at this occasion, considering that BoJo as PM had imposed the rules regarding not more than one person meeting another outdoors appear somewhat, or even outrageously, hypocritical?

On the day of this party — and BoJo had the brazen cheek to attend Parliament on Wednesday this week and claim it was a work gathering, much to the merriment of his own backbenches — 268 citizens of the UK died. Their relatives, under the diktat of the lockdown rules, were obediently, caringly but tragically, deprived of this last human contact with their loved ones. And no doubt BoJo and Carrie were raising a glass of bubbly and spooning in the caviar. O tempora O mores!

The revelations concerning the truth of this May celebration follows eight other scandalous reports of parties held in government offices and particularly one in December 2020 when the country was again in a government-imposed lockdown prohibiting such gatherings. This party came to light when a video recording of Allegra Stratton, a BoJo spokesperson, was leaked. It showed Stratton in the company of other No. 10 staff mockingly referring to the “party” which they were imperiously going to pass off as a working meeting. Allegations emerged of other government ministries holding parties during the lockdown in defiance of the rules they all hypocritically endorsed and imposed on the rest of the country.

And the country cries out in pain and outrage. To my undiscerning ears, the cry will have consequences. The public is not amused -- or fooled. They know that Carrie Antoinette was eating cake while they went without bread. Already, four Opposition leaders have officially demanded BoJo’s resignation. Even the Tory MPs, who fear for their own jobs once BoJo is dislodged, may even now be thinking of replacing him in a hurry by someone untouched by the sleaze to carry them into the next election.

BoJo couldn’t dodge the consequences of the media revelations. He has resorted to instituting an enquiry led by Sue Gray, a senior civil servant (who works for him) to establish whether any lockdown rules were broken during these “alleged” parties. If Ms Gray reports that they were, and that he lied to Parliament and exhibited traits of character unworthy of the PM, then BoJo will be GoJo.

No doubt Hedgy Sunak, Liz Truss and the others are trying to distance themselves as far as possible from the parties, the inquiry and the affairs as they plot to replace Pinocchio. They may not have the chance. If a good number of Tory MPs, putting service to the nation above personal considerations (are baboons about to build five-star toilet facilities to stop defecting in the jungle? Maybe… maybe…), join the Opposition in a no-confidence motion, there will be a general election.

The dilemma then for Labour leader and future PM Sir Keir Starmer and Lady Starmer is how to get rid of the ridiculously bad-taste, kitsch décor which Antoinette has imposed on 10 Downing Street. Décor that would make the guests sick at any indoor party.