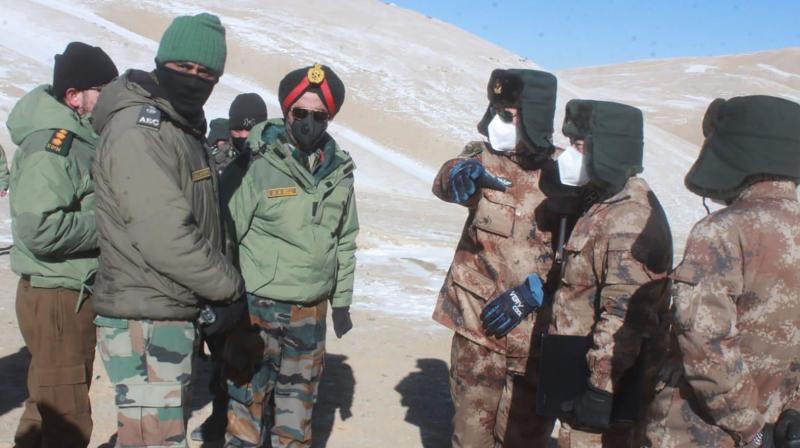 India’s ability to negotiate is severely constricted owing to its diminished Net National Power over the past 80 months of the NDA/BJP rule. (Photo:AP)

The Sino-Indian disengagement deal in Eastern Ladakh is a bad deal. Make no mistake it is an agreement on terms of the People’s Liberation Army (PLA). Unfortunately, it was perhaps the only one on the table and thus a fait accompli. India’s ability to negotiate is severely constricted owing to its diminished Net National Power over the past 80 months of the NDA/BJP rule. A ravaged economy, coupled with cut to the bone defence spending, has left us very vulnerable.

The decision to disengage on the Southern bank of Pangong Tso, thereby giving up our tactical advantage on the Kailash range in return for China moving back to their base in Srijap east of Finger eight and India moving to its position on Finger three — the Dhan Singh Thapa Post, can hardly be termed as a negotiating triumph.

The judgment not to have a broader disengagement all along the Line of Actual Control (LAC) encompassing Depsan, Gogra, Hot Springs, Naku-la and the Upper Subansiri district of Arunachal Pradesh, given that the Chinese have transgressed across our perception line of the LAC at all these places, has, in fact, de-facto legitimised the Chinese 1959 claim line.

Anyone in government with even a nodding acquaintance with the November 1960 “Report of Officials of the Government of India and the People’s Republic of China on the Boundary Question” knows that the Chinese perception line of the LAC, even according to them, lies further to the east of Finger eight. The PLA, therefore, has withdrawn only to their perceived claim line without making any substantive concession.

It would be noteworthy to recall that on the intervening night of August 29 and 30, 2020, Indian troops had occupied commanding positions on the heights overlooking the south bank of Pangong Tso. These heights included Rezang La, Reqin La, Black Top, Hanan, Helmet, Gurung Hill, Gorkha Hill and Magar Hill.

The operative part of defence minister Rajnath Singh statement to both Houses of Parliament underscores this concession unambiguously. He said, “The agreement that we have been able to reach with the Chinese side for disengagement in the Pangong lake area envisages that both sides will cease their forward deployments in a phased, coordinated and verified manner.

The Chinese side will keep its troop presence in the North Bank area to east of Finger 8. Reciprocally, the Indian troops will be based at their permanent base at Dhan Singh Thapa Post near Finger 3.

A similar action would be taken in the South Bank area by both sides. These are mutual and reciprocal steps and any structures that had been built by both sides since April 2020 in both North and South Bank area will be removed and the landforms will be restored. It has also been agreed to have a temporary moratorium on military activities by both sides in the North Bank, including patrolling to the traditional areas. Patrolling will be resumed only when both sides reach an agreement in diplomatic and military talks that would be held subsequently. The implementation of this agreement has started yesterday in the North and South Bank of the Pangong Lake. It will substantially restore the situation to that existing prior to commencement of the standoff last year… The House should also know that there are still some outstanding issues with regard to deployment and patrolling at some other points along the LAC in Eastern Ladakh. These will be the focus of further discussions with the Chinese side.”

What this statement clearly means is that India has exchanged its tactical advantage on the South Bank of Pangong Tso for concessions on the North Bank. India will leave the tactically important heights it had occupied in late August.

Why did the Chinese agree to go back and now? To answer that question one needs decode a further riddle. Why did the Chinese come in the first place? This is a question no one in the Indian strategic community has ever asked with any degree of seriousness and the government, of course, runs a mile refusing both to discuss and even answer questions on the Chinese transgression both inside and outside Parliament.

Let us rewind to the February-March of 2020. Details started emerging that the China in conjunction with the World Health Organisation (WHO) had covered up the severity of a mystery illness that broke out in Wuhan on November 19 and soon became the worst global pandemic since 1918. Given a generic “nom de guerre” Covid-19 it should have rightly been called the China Virus. This rapidly proliferating virus caused horror around the world calling into serious question Chinese pretensions of global leadership.

The Communist Party of China (CPC), thereafter, was confronted with a twin challenge of gargantuan proportions. Staving off an international scientific investigation into the origins of the coronavirus pandemic because it would have triggered of enormous demands for reparations and concurrently repair the global damage to its standing.

It, therefore, decided to act with extreme bellicosity. It created three flashpoints. First and foremost it stoked tensions in the South China Sea by unilaterally announcing on April 18, 2020, the establishment of two new administrative structures, prompting the US Navy to launch repeated freedom of navigation operations through out 2020. Second, in April itself, it encroached deep into Indian territory at multiple points along the LAC in contravention of multiple agreements. It did not even hesitate to engage in the most medieval orgy of violence on June 15 and 16 in the Galwan valley that left 20 Indian soldiers dead. A stand-off that is continuing even today.

On June 30, it moved on the sovereignty of Hong Kong by enacting a new security law that fundamentally transformed the “one nation two systems” paradigm, thereby sparking of another international outrage.

The intent was to send a message to the world. China would react with ruthlessness and irresponsibility if the world demanded accountability for its malfeasance qua Covid-19.

Then, very mysteriously, on February 9, 2021, a WHO investigative team, after a purported four-week investigation, gave China a virtual clean chit by publicly declaring that the coronavirus came from an animal and had not leaked from the laboratory in Wuhan. China had got its vindication. Its threat to disrupt global peace had paid off.

On February 11, Rajnath Singh announced the disengagement deal. Are these two developments coincidental? Absolutely not. China is a bad actor. The world will pay a price for succumbing to its blackmail in the years ahead.