Opinion   Columnists  14 Apr 2020  Manish Tewari: What we need is a New Deal for health
Opinion, Columnists

Manish Tewari: What we need is a New Deal for health

It'll take 6 lakh crore rupees to build from the ground up, but let's do it 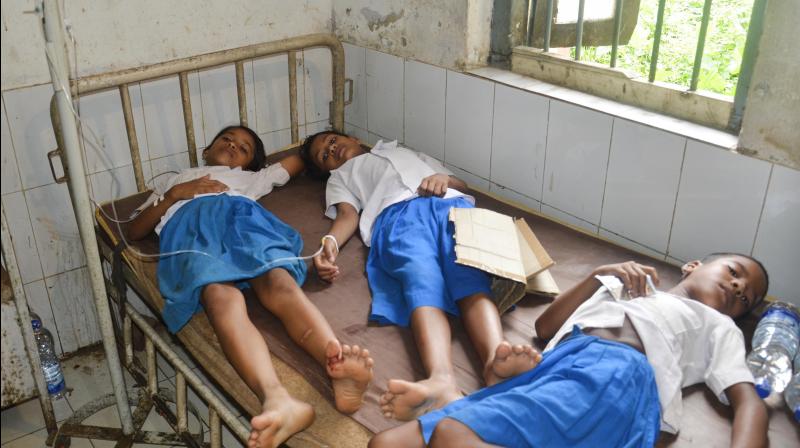 Schoolgirls share a bed at a primary health centre in rural India. (AFP)

The most tragic image of the Covid-19 crisis so far has been of the millions of abandoned workers fleeing the cruel metropolises of our country, yearning for the safety of home and hearth. Pathetic reports have poured in of the Covid-19 dead being abandoned by their families in hospitals; of villages not allowing the deceased to be cremated, terrified that the smoke would contaminate them. However, conversely, the heroic work being done by our frontline health workers, police and municipal authorities restores our faith. This crisis like every other has brought out the best and the worst in human behaviour.

However, stop and think for a moment. What if the virus were airborne? What if the virus did not respect the sovereignty of social distancing? What if it paid no heed to the new border that is your doorstep? What if hand washing was not a temporary solution? What if another variant of the virus were to get airborne in the not too distant future? Where would that leave humanity? Precisely where the Spanish Flu left us a hundred years ago: with 50 million dead. They did not know a virus then; we do not know the coronavirus now. The only known unknown is that there is no vaccine so far and all cures are hit and trial.

This new initiative must commence with universal and compulsory health insurance for all. While at first glance the numbers of the Ayushman Bharat Pradhan Mantri Jan Arogya Yojana (AB-PMJAY) may look comforting, the devil lies in the detail. The government claims that by December 2, 2019, PMJAY had covered over 6.8 million hospitalisations worth Rs 7,160 crore and issued more than 67 million e-cards to beneficiaries and is currently being implemented in all but four states, Odisha, Telangana, West Bengal and New Delhi.

Interestingly, in terms of recipient states, Delhi is the national healthcare provider, and Gujarat and Maharashtra are the other recipients among the bigger states. What this points to is the skewed nature of our health infrastructure. While Delhi is not part of Ayushman Bharat, it is the biggest beneficiary of it in terms of payouts. This is essentially because the portability feature of the scheme allows people to get themselves treated outside their home state. Moreover, the scheme is not universal; it provides insurance cover of Rs 5 lakh to ten crore poor and vulnerable families identified by the Socio-Economic Caste Census (SECC) of 2011.

Notwithstanding these numbers, according to one estimate, 70 per cent of Indians still rely on private healthcare for their health needs, even if they have to bear the out-of-pocket costs, which plunges close to 55 million people into poverty.

An analysis of the National Health Profile 2019 suggests that there are 7,13,986 hospital beds available in government hospitals in India. This works out to 0.55 beds per 1,000 population. Many states fall below the national level figure. They include Bihar, Jharkhand, Gujarat, Uttar Pradesh, Andhra Pradesh, Chhattisgarh, Madhya Pradesh, Haryana, Maharashtra, Odisha, Assam and Manipur -- 12 states that together account for close to 70 per cent of the population of India. Bihar has just 0.11 government hospital beds available per 1,000 population. While there are no accurate numbers available for private hospital beds, projections seem to suggest that that there are about 22 lakh in number across the country.

Primary health centres (PHCs) are the keystone of rural healthcare in India. They are essentially single-physician clinics usually with very rudimentary facilities. They are supposed to be the first point of contact between a rural patient and a qualified doctor.

The PHCs act as referral centres to the community health centres. These are 30-bed hospitals at the block level. Invariably referrals are made to better equipped public hospitals at the district level as community health centres are also woefully ill-equipped, Each PHC is targeted to cover a population of approximately 20,000 in hilly, tribal, or difficult-to-access areas, and a population of 30,000 in plain areas, with four to six indoor/observation beds, and is charged with providing a wide range of services such as health education, promotion of nutrition, provision of mother and child family welfare services, immunisation, disease control, appropriate treatment for illness and injury, basic sanitation, and safe drinking water supply.

However, more often than not India’s basic health infrastructure is understaffed, ill-equipped and unable to deliver even the basics. This drives the poor in the arms of private doctors or a unique Indian innovation called the registered medical practitioner (RMP).

What the state and the central government collectively need to do is build bottom up a state-of-the-art health infrastructure that is appropriately resourced, equipped and staffed.

That will require six lakh crore rupees, according to a back-of-the-envelope calculation — Rs 50 lakh per sub-centre, Rs 5 crore per PHC and Rs 20 crore per community health centre. This is only for the primary infrastructure across rural and urban India. Then we would need to ramp up our district, tertiary and critical care facilities. Even if we create one state-of-the-art facility in each of the 736 districts, that would require an additional Rs 38,000 crore at Rs 50 crore a chop. Another Rs 1 lakh crore would be required to bring our superspeciality infrastructure up to speed. And then this will have to be backed with expanded medical education facilities.

If the states and the central government together formulate a five-year plan and pledge Rs 6 lakh crore over that period of time, would we have a viable primary medical infrastructure backed by universal health insurance that can take care of the basic health needs of our people and become an efficacious first responder in times of a pandemic like Covid-19? In the wake of the Covid-19 catastrophe, there would be other priorities, but don’t you think what this crisis is exposing requires a Health First People First approach?