What India is seeing is a generation of political leaders who are immature, who lack the poise of a leader of a national stature 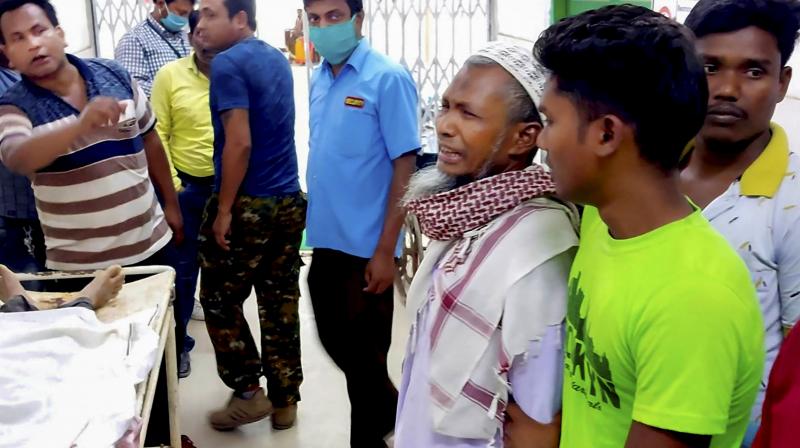 Family members mourn near the body of the deceased after clashes erupted between locals and central forces during the fourth phase of West Bengal Assembly Election in Cooch Behar. (Photo: PTI)

Had there been any firing of the kind that took place at Sitalkuchi in Cooch Behar on April 10, where four persons were killed in firing by the Central Industrial Security Force, and another person was killed in a violent clash, political leaders from all sides anywhere else would have condemned the firing and condoled the death of all five. There would have been a demand for an inquiry on whether the firing was justified. Did the CISF open fire only as a last resort? Did they use lathi-charge and teargas before shooting? It might be argued that the CISF doesn’t follow the usual police protocols because, as those called to guard industrial installations, they usually fire straightaway. But when detailed for poll duty, the CISF personnel should be appropriately reoriented. The first thing the Election Commission should have done is to call for a report as why there was firing in the first place. The Election Commission must not let it appear that firing at people, even killing them, is part of the orderly conduct of elections. That would lower the criterion of free and fair elections.

The Trinamul Congress as well as BJP leaders should have appealed to the people to desist from violence and facilitate a peaceful poll. Instead, West Bengal chief minister Mamata Banerjee calls it a “genocide”, though she had every right to ask the EC to order an inquiry. Union home minister Amit Shah, the BJP’s star campaigner, should have condoled the death of the five persons instead of blaming Ms Banerjee for inciting the crowd. Prime Minister Narendra Modi did condole the death of the five, but his main focus was on blaming Ms Banerjee.

What seems to be adding to the violence in the atmosphere -- there seems to be violence in the air even when it is not breaking out in violent episodes -- and this has been the result of inciting speeches made by the BJP leaders, including Prime Minister Narendra Modi, home minister Amit Shah and other sundry party minions like the West Bengal BJP president Dilip Ghosh and party MP Rakesh Sinha, on the one side, and TMC supremo and West Bengal CM Mamata Banerjee and her minions on the other side. It is to be expected that in a fiercely fought election like the ongoing one in Bengal, each side would use sharp language against the other, but the belligerence on the part of the two main rivals -- BJP and TMC -- has not exactly been decent. As a matter of fact, indecent and provocative speeches on all sides marked a new low in this bout of electioneering, and this has contributed to the violent quotient in a generally violence-prone West Bengal. Mr Modi and Ms Banerjee have been setting a bad example of how rivals should be debating issues, including contentious ones.

If Ms Banerjee’s pronouncements have been intemperate, those of Mr Modi and Mr Shah as well as their BJP colleagues have been plainly shameful, because they were all personal attacks on Ms Banerjee. In a media interview after the 2019 Lok Sabha election, Mr Modi remarked that the election was not for choosing a class monitor but for the Prime Minister, justifying the coarse language that was used on the campaign trail.

The question does arise as to what extent the Election Commission could intervene to douse tempers and lower the temperature. There is little doubt that the commission would hesitate to pass strictures against either the Prime Minister or the home minister even if there is enough cause to do so. Mr Modi’s direct reference to the issue of Matuas in his speech at Burdwan, and his plain confession that he had visited the shrine of the Matua guru during his recent state visit to Bangladesh and using it in a poll speech was a violation of the Model Code of Conduct. Similarly, Mr Shah saying in a media interview during the campaign that “Jai Shri Ram” was a political, and not a religious, slogan called for a rap from the Election Commission. So, the warnings against state BJP president Dilip Ghosh and party leader Dilip Sinha seemed too little and too late, apart from sending out a signal that the gesture of the Election Commission to be seen as evenhanded was a weak gesture at best, and unconvincing at the worst.

The EC not only has to be impartial, but it has to be seen to be impartial. Prime Minister Modi and home minister Shah’s in-your-face dominance gives the impression that independent constitutional offices like that of the Election Commission dare not assert their constitutional status. The commission can cite chapter and verse to show that it has not been afraid of the Narendra Modi government, but it is the contrary perception that mars the image of the commission. Both the commission and the Narendra Modi government are sure to argue that this is due to the malicious propaganda of the Opposition parties! But people will not be wiling to buy the argument because of the commission’s hesitant behaviour in its dealings with the BJP in contrast to its decisive stand against the acts of omission and commission by the leaders of the Opposition parties.

Ms Banerjee’s speeches have always lacked restraint, but it can be said without sounding partisan that there is no diabolical cunning in her outbursts, though this would not justify her outbursts. On Tuesday, in a speech at Barasat she called Prime Minister Modi a liar, and immediately corrected herself, saying that “liar” was an unparliamentary word, and that the Prime Minister was misleading the people when said that her government had done nothing for the Matua community.

What India is seeing is a generation of political leaders who are immature, who lack the poise of a leader of a national stature, they are quick-tempered and allow their passions to shape their words. While Indian democracy is to be celebrated for its vibrancy and vitality, it does not pass muster for democratic decencies.

Unfortunately, neither Mr Modi nor Ms Banerjee are willing to set the benchmark for polite democratic discourse. Their ill-tempered speeches poison the air and contribute to the violent atmosphere.