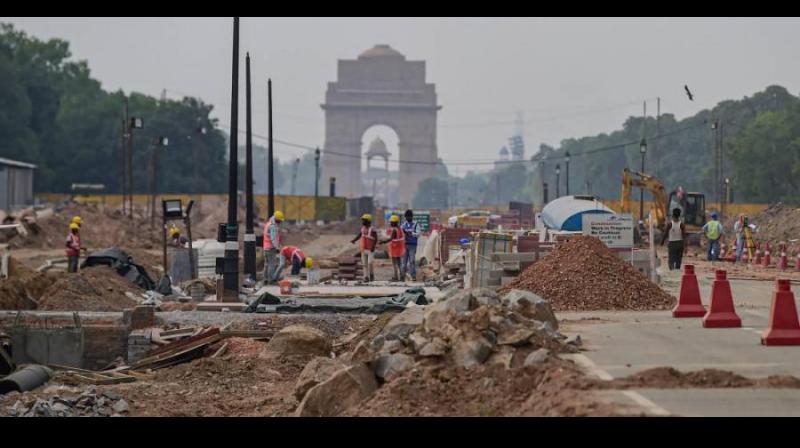 Construction work underway as part of the Central Vista Redevelopment Project, at Rajpath in New Delhi, Thursday, May 6, 2021. (Photo: PTI)

The Hindi word for the two-toed, flightless largest living bird known as the ostrich is “shuturmurg”. I bet you didn’t know that! Well, India is full of shuturmurgs right now, most of them working for the government. Prime Minister Narendra Modi can’t seem to make up his mind -- to be a peacock or an ostrich. Which is maybe why he plays both, depending on the occasion. Of course, the ostrich in him makes sure he sees nothing and says nothing, while he watches India being turned into the world’s biggest funeral pyre. Ostriches are known to run really fast when they are being chased by enemies (real or imaginary). Since our PM is staying put and not running, it’s safe to assume he has zero enemies chasing him. The peacock in him makes sure his rare public appearances are perfectly colour coordinated and his flowing snowy beard well-groomed. He is now beginning to resemble the biblical Moses rather than Tagore or an Indian sage. But, unfortunately for citizens, he doesn’t bear tablets in his hands nor an iPad with 10 or 20 or even 100 commandments. He says nothing at all. For a man known to like the sound of his own voice (six years of Modinama), one wonders about the stony radio silence.

Meanwhile, home minister Amit Shah stays in purdah as meme-makers go into overdrive (“Students’ union files a missing person’s report for Amit Bhai”). With two of the most important men in India not around during the country’s biggest crisis, we are stuck with a headless chicken (the absentee government) in charge. In charge of WHAT, you ask. Hello! In charge of us: the hapless citizens of this great nation. Guys -- get this clearly -- we are adrift, minus life jackets. There is no sighting of the captain who seems to have abandoned the ship. So please don’t stress over minor issues and keep asking: “Where’s the roadmap for the future? How do we tackle the acute vaccine shortage? What happens when the third wave hits India?” Bhagwan ka naam lo -- and hope for the best. The roadmap doesn’t exist.

A distraught friend from Jaipur was close to tears when he said: “People are dying on the streets. But the government reports only six deaths, while the funeral homes report 57 -- that’s how wide the gap is.” From all corners of India, citizens are sending out pathetic appeals for oxygen cylinders, beds, oximeters, vaccines -- anything to save their loved ones. There is only a stone wall in front of them. Isn’t it unbelievable and horrifying that our PM keeps mum through such an unprecedented tragedy? Why? It’s an absolute mystery! Why has the “Great Communicator” not expressed sympathy, reassured citizens and calmed an agitated nation? Forget an apology. Forget owning up his responsibility. Forget taking charge. Such a cavalier and heartless attitude speaks of bad politics and terrible image management. Here’s a man who rose to the pinnacle of power through image manipulation. He understands the impact of optics, he’s the master of the social media game -- and yet he refuses to pacify his countrymen and countrywomen. Unless we are overlooking the arrogance of megalomaniacs through history -- those who cruelly control their own people through fear, terror tactics, severe punishment and the threat of death.

At this point, death is at our door regardless – what’s left to “fear”? Experts are warning us the times ahead will be a lot worse. In a masterly, timely and balanced essay Dr Devi Shetty gives readers a no-frills, straight-up perspective on what awaits us. The picture is far from pretty. That we are woefully short of ICUs is known. But so far, these were meant for adults. The third wave is likely to affect our infants and children -- hospitals are simply not geared to meet this challenge. As always, Dr Shetty doesn’t merely paint a grim picture and leave it there, he also offers strategic solutions. Why doesn’t our PM induct him to lead a crack Covid team and stall the inevitable disaster?

All along, India wasted precious time and resources not enforcing Covid-19 protocols strictly. An old clip of Assam’s then BJP health minister (who is now chief minister) Himanta Biswa Sarma is doing the rounds. In that he tells a persistent reporter that masks are “not necessary” as there’s not even a single Covid-19 case in his state.

That’s the level of brazenness, plus a lack of education of our elected representatives. This week former Uttarakhand CM Trivendra Rawat said: “Corona is also a creature and has the right to live.” Insane!! D.V. Sadananda Gowda, another brilliant minister (chemicals and fertilisers) asks unnecessarily: “If vaccines are not produced yet, should we hang ourselves?” To which netzines retorted: “What an idea, Sirji!” Chief ministers are callously playing with the lives of citizens, sitting back and averting their eyes from the pileup of corpses. Unless, of course, those corpses are found floating in the holy Ganga! That’s when a few politicians sit up and ask for an inquiry. Kyon? Because the holy Ganga has been polluted -- not because those who threw the half-burnt, plastic-wrapped bodies into the river may have been left with no other choice! We are running out of firewood for pyres. We will soon run out of space for graves.

These are humanitarian issues. Our leaders lack humanity. They don’t have to be scientists or Covid experts. They just need to be human. And tell people that no matter what, help will reach them. Instead, all energies are focused on completing the Rs 20,000-crore

Central Vista construction in New Delhi: Prime Minister Modi’s pet project. Imagine the irony: a man the world admired for rising to the highest position in the country after starting his life as a humble chaiwalla and sleeping on a hard floor now wants to reside in an opulent multi-crore palace, financed by us!

Today, there are any number of Indians who are demanding the Prime Minister’s resignation (as would happen in any other civilised country) and holding him directly responsible for this unspeakable tragedy. Others are seriously nominating an actor (Sonu Sood) for PM, in recognition of his sustained work during the pandemic.

Rather an actor who delivers and feels the pain of his fellow citizens than a wannabe superstar who has forgotten his dialogues.