In lawless states like India, even the government does not know the law 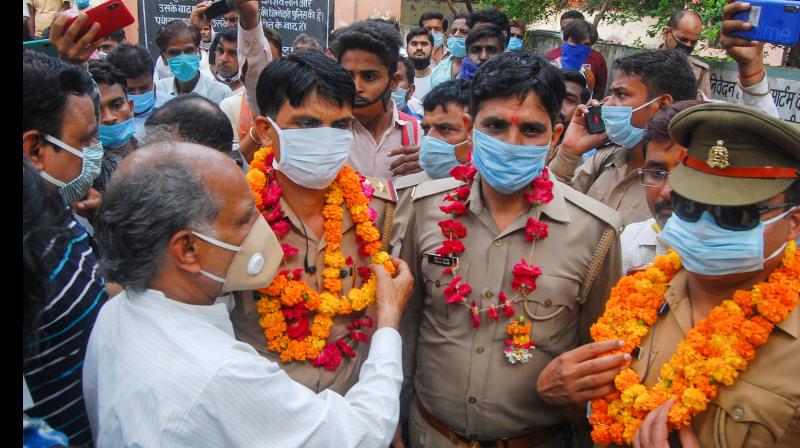 A man who used his influence to get away with the worst crimes surrenders and is shot dead in custody before he can reveal his secrets. PTI Photo

The United Nations defines the rule of law as a “principle of governance in which all persons, institutions and entities, public and private, including the State itself, are accountable to laws that are publicly promulgated, equally enforced and independently adjudicated, and which are consistent with international human rights norms and standards”.

India is a rule of law state and Article 21 of our Constitution says “no person shall be deprived of his life or personal liberty except according to the procedure established by law”. The government is bound by law to follow this. To break this rule is to break the law and commit a crime.

In his dissent against the Supreme Court sanctioning of Indira Gandhi’s power grab, Justice H.R. Khanna said: “Without such sanctity of life and liberty, the distinction between a lawless society and one governed by laws would cease to have any meaning.”

In that case, then attorney-general of India Niren De is said to have made the claim that during the Emergency, even the right to life under Article 21 was at the mercy of the state.

To this, Justice Khanna asked: “Supposing some policeman for reasons of enmity, not of state, kills someone, would there not be a remedy?”
De said: “Consistent with my position, My Lord, not so long as the Emergency lasts. It shocks my conscience, it may shock yours, but there is no remedy.”

Decades later, Justice Khanna’s view was upheld by a nine-judge bench which said: “No civilised state can contemplate an encroachment upon life and personal liberty without the authority of law. Neither life nor liberty are bounties conferred by the State nor does the Constitution create these rights. The right to life has existed even before the advent of the Constitution. In recognising the right, the Constitution does not become the sole repository of the right.”

What is happening in India today is not the rule of law. We are a lawless nation, and I do not say this in anger or in frustration. I am saying it as an objective statement of what is going on around us.

A man who used his influence to get away with the worst crimes surrenders and is shot dead in custody before he can reveal his secrets. He is not tried as the Constitution requires him to be but executed without due process.

A father and his son can be tortured and murdered by the police for keeping their shop open. This happens in India. It also happens in other lawless states, and that is a fact. Those who have power will use it against those they can in lawless states.

In lawless states like India, even the government does not know the law. The Narendra Modi government passed a law banning the sale of cows and buffaloes for slaughter at animal markets. Mr Modi loves cows but did not know that he had no authority to do this.

This is because the subject is on the State List of the Constitution, and not the Central List. The Union government did not know this before it wrote the law.

When the Supreme Court pointed this out, the law was withdrawn. This is what happens in lawless states.

The right to propagation with the specific meaning of conversion is guaranteed in Article 25 as the Constituent Assembly debates show.

The Odisha high court struck down the law but the Supreme Court, using faulty, illogical, unsound and barely literate reasoning, overruled the high court judgment. What has resulted is that 10 states have now legislated anti-conversion laws (deceitfully titled “Freedom of Religion Laws”), and Uttar Pradesh is poised to be the 11th.