Washington has levers against Beijing but using them in the form of tweets in making foreign policy as he goes along is a road to disaster. 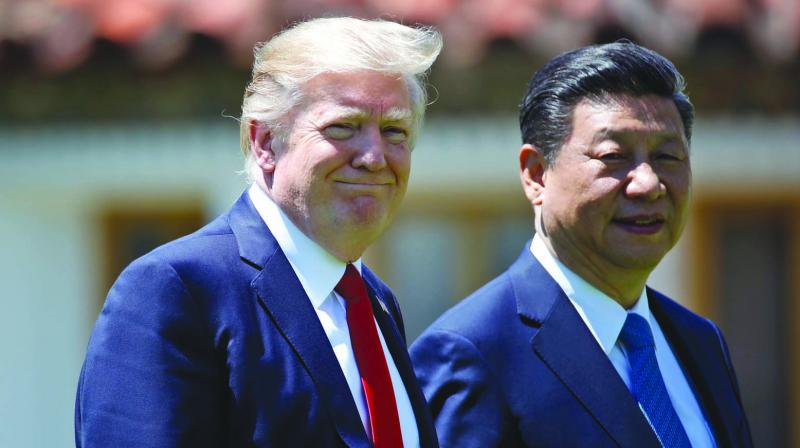 US President Donald Trump’s failure as a leader is writ large over how he is handling the question of North Korea’s nuclear ambitions. The tussle between giant United States and pigmy North Korea is taking on farcical tones were it not for the seriousness of the issues involved. The nub of the problem is simple: Pyongyang wants to enter the nuclear club as a protection against being taken over by the US on South Korea’s behalf while Mr Trump is using bluster to try to humiliate Kim Jong-un and at the same time seeking Beijing’s help.

In the event, Mr Trump’s strategy, if he has one, is not working. China does not want a reunified Korea with US troops right on its border and President Xi Jinping, the lifeline to North Korea’s existence, played along with the US in not vetoing a new anti-Pyongyang United Nations sanctions resolution, is holding firm to safeguard its interests.

Everyone realises that there are no good options. What complicates the picture is Mr Trump’s lack of leadership skills as he veers from praising Mr Xi to haranguing him to perform America’s job. Washington has levers against Beijing but using them in the form of tweets in making foreign policy as he goes along is a road to disaster.

Mr Trump first suggested that if North Korea built a missile that could reach mainland America, it would cross a red line, first after saying: “It won’t happen”. In July, Pyongyang demonstrated such a capacity, according to experts. Apart from pressing Mr Xi further, Mr Trump has resorted to painting a blood-curdling picture in his new diatribes against the North. His secretary of state, Rex Tillerson, is putting the kindest construct on it without conviction.

President Xi is happy with the travails of the United States with an eccentric and unpredictable President as it gives him a chance to appeal for calm and peace. In striking contrast, he is not following his own advice in unleashing a barrage of threats and insults at India by state-controlled media on the standoff at the tri-junction in the Himalayas.

North Korea’s nuclear programme is the most serious of the problems facing the US administration as Americans wake up each morning to read the latest of Mr Trump’s tweets making his foreign policy advisers’ lives an adventure. Although Mr Trump has sought to repair his ties with the North Atlantic Treaty Organisation after calling it “obsolete”, he has cancelled the landmark proposed trade deal in East Asia excluding China, much to the comfort of Beijing.

There is a rising tide of foreign policy experts in the US who are pinpointing two traits of the President: his abdication of the traditional American leadership role assumed by Washington since the end of World War II and his inability to bone up on the intricacies of foreign policy issues, despite his advisers’ briefing. These deficiencies are a major hurdle in coping with the North Korean crisis.

Mr Trump is very mindful of his domestic constituency, the less prosperous and poorly educated whites left behind by the technological revolution. The “America First” slogan naturally appeals to them even as it trumps all that America has stood for in the post-War years. Mr Trump does not realise that he cannot wish away a large slice of recent history to please his domestic constituency.

Mr Trump’s future depends upon the fate of the current investigations into his campaign’s links and potential complicity with Russia on seeking the presidency. The special prosecutor, Mr Robert Mueller, is assiduously at work. Investigators thus far have already brought out some embarrassing leads. Mr Trump has no easy options. He has been already warned by legislators against sacking Mr Mueller and is being frustrated in his original efforts to build a better relationship with Russian President Vladimir Putin, despite the two long meetings he had with the Russian leader on the sidelines of the G-20 summit in Germany.

Meanwhile, the crisis on North Korea continues to simmer. There are suggestions that US and Pyongyang officials are conducting private talks to find a way out after the young Kim Jong-un threatened to fire a missile at the US military base in Guam. Mr Kim is a match for Mr Trump in overblown rhetoric, imitating as it does the standard Chinese Communist Party rhetoric of the old days.

Little is known about Mr Kim from the Kim dynasty except that he is something of a recluse, not visiting fraternal countries or receiving high-profile foreign political guests. Rumours have swirled around him on the murders he has ordered of several relatives and former close associates, including his step-brother Kim Jong-nam, murdered at a Malaysian airport, a case that is still being processed.

For the wider world, the fate of Mr Trump is more important because the future political direction America takes is still of great significance.

China is playing a balancing game in placating America to an extent without cutting off it trade lifeline to Pyongyang, UN resolution notwithstanding. The US can greatly harm Chinese interests but Beijing, in line with the rest of the world, is feeling its way to discovering how best to deal with Mr Trump’s America.

Unpredictably is a serious problem for the world’s chancelleries in dealing with major foreign policy issues. North Korea has popped up the question rather early in Mr Trump’s presidency, leaving the ultimate American response still a matter of conjecture. It is not known how seriously Mr Trump took the advice of his predecessor, Barack Obama. that North Korea would be the most difficult immediate problem he would have to face in his presidency.

While Chinese ideologues must be smirking at American discomfort at having Mr Trump as President, President Xi has his own problems to worry about in hammering out a team loyal to him at the forthcoming congress in the autumn for his second five-year term, with an eye on a possible extension. But the real decisions will be taken in secret conclaves before the congress meets.