Both Atal Behari Vajpayee and Manmohan Singh functioned as Prime Ministers and the country moved, and no one felt the need to idolise them 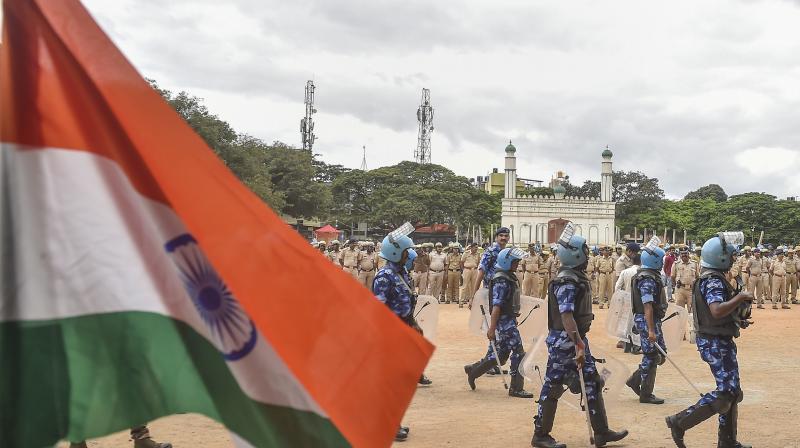 The national flag is seen in the foreground as Rapid Action force (RAF) and Karnataka police personnel patrol on the disputed Idgah Maidan, on the eve of 76th Independence Day, at Chamrajpet area in Bengaluru, Sunday, Aug. 14, 2022. (PTI)

So, what’s the mood? That seems to be the question that is playing on the minds of analysts and other observers who want to understand the significance of 2022, marking 75 years of India’s Independence. It is a tricky issue indeed because the mood could change quite quickly, and one could look slightly foolish to have stuck one’s head out and say: “This is the mood”. Or shall we say: “How’s the josh?”

If we go by the speeches of politicians like Prime Minister Narendra Modi, Union home minister Amit Shah, Uttar Pradesh chief minister Yogi Adityanath or Delhi chief minister Arvind Kejriwal, among others, it seems to be a delirious moment of jingoism, not patriotism. It is all about flying the nation’s tricolour, of India becoming a superpower.

There is even the delusion that India is about to become a global power, and it is just a step away from becoming a superpower. This is indeed the dominant mood, the josh, so to say. The irrational exuberance is normal behaviour, and forget the Cassandras.

There is no need to frown upon this. Every festival has become a market opportunity, from Raksha Bandhan to Akshaya Tritiya! Independence Day and Republic Day are good marketing opportunities to celebrate. There is a note of arrogance more than confidence in the celebration. Look back to the mood in 1972, the silver jubilee of our Independence, and 1997, the fiftieth year of Independence, and it will tell us that we are in a different place now. In 1972, India had just won a major war, helped Bangladesh to emerge, and in the process changed the very geography of the subcontinent. But there was no mood of triumphalism. The country was in a moment of sober reflection, about tackling the costs of the war and that of the Bangladesh refugees. Yes, the Congress Party felt it had found an invincible leader in Indira Gandhi. But it was not too loud, but if you go back and hear the Congress voices of 1972, you will see that the BJP voices of 2022 sound somewhat similar. But there were no market amplifiers then, as there are now. So, the increased decibel levels around celebrating the leader — Narendra Modi in 2022, compared to Indira Gandhi in 1972 — should not come as any surprise. Of course, the best time to judge 2022 would be to look back at this year in 2030, and more appropriately in 2047. We will get a much clearer picture then. Right now, we must look back to 1972 and 1997 to get the 2022 focus right.

In 1972, India had passed the troublesome decade of 1960s, the defeat in the 1962 China war, the tough military victory in the 1965 Pakistan war, and the calibrated military triumph in Bangladesh. But back in 1972, one could not see the economic problems that were simmering beneath the surface, and broke out in the economic troubles of 1973 and 1974, and the political trauma of the Emergency in 1975. It was only in the 1980s that the economy began to turn around. The Indira cult of 1972 virtually disappeared in the economic and political storms of the rest of the decade.

The year 1997 was an interesting inflection point. There was political confusion, but it seemed that the country was no more obsessed with politics and national leaders. The unstable United Front government and Inder Kumar Gujral as Prime Minister did not create any concern in the country. It seemed that we were getting used to democracy, and that coalition governments and weak Prime Ministers would be the norm. There was surprising optimism. The economic reforms of 1991 launched by a soporific Prime Minister, P.V. Narasimha Rao, who was happy to operate from the wings, gave rise to hope to the middle classes and to the poor, that they can improve their lives and that they do not have to look to governments and political leaders for inspiration. And in the 25 years since then, the India growth story has only stabilised, and people got busy finding jobs, moving places, and enjoying what they could with their increased purchasing power, however marginal, and the many choices they had before them of what they could buy and what they could do. It gave an opportunity to public intellectuals, including editors of newspapers and commentators, to sing the song of the demographic dividend awaiting a young India, and looking back with contempt at the years that went by, of the so-called “licence-permit-raj”. Both Atal Behari Vajpayee and Manmohan Singh functioned as Prime Ministers and the country moved, and no one felt the need to idolise them.

With the arrival of Prime Minister Narendra Modi n 2014, the clock of political discourse turned back, and suddenly the chattering classes, including the market-friendly editors, began to speak of the importance of political leadership and national leadership to guide the nation’s progress and destiny. Indira Gandhi at the height of her political popularity never won the approval of the editorial class of the national media.

The emphasis on 2022 is leadership and Prime Minister Modi as the leader. The leader is indeed the flavour of the season, but as happened after 1972, and before and after 1997, the mood will change, and other flavours will emerge.

The year 2022 belongs to Mr Modi and the BJP, and not so much to the country. The general signs of the time are not too cheerful. The world economy is in a tizzy, and the verities of free markets are taking a beating in the wake of the global Covid-19 pandemic is 2020-21. The climate change crisis is assuming critical proportions.

Cynical politicians are turning into ardent environmentalists. Ordinary people are feeling the heat of climate change. Economic growth does not seem to be an inevitable outcome as it had seemed in 1997.

The rhetoric of Prime Minister Modi and his right-wing Hindu fellow-travellers has crowded out the challenges before India and the world. India looks stronger at 75 to make the difficult choices as the global economy is buffeted by uncertainty. India is at the cusp of untethered triumphalism, of a vague sense of an ancient civilisation coming into its own. But it has not yet reached any peak of economic success, military power or major scientific breakthrough. India is hanging in the twilight zone of hope and fear, of success and failure.