There has been 'panic buying' over Christmas gifts as well 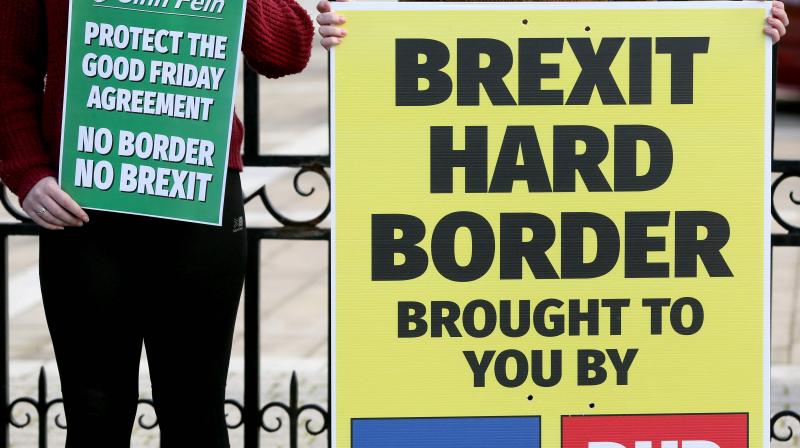 In this file photo taken on October 17, 2018 Students hold up Sinn Fein anti-Brexit placards during a rally against Brexit and any hard border between Ireland and Northern Ireland outside Queens University Belfast, Northern Ireland. (Photo: AFP)

When women reach the top of their league in politics or any other sphere, the credit is often given to a man. The woman’s own experience or drive counts for little. Thus the story of the Deputy Labour leader, Angela Raynor, is a startling change. Recently she spoke of how she was a carer for her bipolar mother, when very young, and received little love or affection when she was growing up, even from her father. She was an unwed mother at the age of 15. This did not stop her from her onward journey — one can only imagine the challenges she must have faced as she had to drop out of school to bring up her young son!

Surprisingly none of this information — especially about her child — has impacted her growth within the party, and in fact she is considered a likely successor (if ever the need arose) for the Labour Leader, Sir Keir Starmer. She also spoke openly of her own fears as a child — and incidents of bedwetting when she was young. Much of this was hidden from her abusive father.

It is this grit and drive that made her determined to prove others wrong. To work hard and show that she could achieve what the rest only dreamt about. For a woman to come thus far — on her own — shows how much the world is changing. We need more women like her who can over come adversity and don’t drop out of the race — even when they are young, unwed mothers.

Angela also proved her fighting spirit when she was denounced as “scum”. Some wanted her to apologise for her attitude and revelations. She has refused to do any such thing. Beware! Angela is not to be taken for granted.

Panic buying is back again! And this time it is fuelled not by Covid, but the UK’s other disaster — Brexit. The real danger now is that all the lorry drivers have gone home to Europe — and food and other essentials simply cannot be towed across the country! Is this beautiful nation finally descending into chaos? One hopes not — and that some solutions will be found. But there is enough to worry about, because fuel prices are also rising adding to the misery of the impending winter. No food, and no fuel can be a rather grim scenario. Of course, according to the Prime Minister, Boris Johnson, things are still quite jolly-ha-ha — and all this panic in the media is pure and simple hysteria. At the Party Conference gatherings (which take place annually) he presented the picture of a jovial salesman — cracking jokes and conjuring images of a rosy future. Many, however, were not amused.

And others are now worried what the impact fuel prices will have on incomes that are already hard hit due to the pandemic.

The tit-for-tat policy over quarantine between India and the UK has certainly worked wonders and we will not have to quarantine for 10 days (or even less) once we enter the UK from India. So this might mean that the Indian influx may begin. But reports are already trickling in that women are not so keen to come as the high-end stores are as equally denuded as the department stores. There has been “panic buying” over Christmas gifts as well. And far too many of the high street stores have shut. In fact, looking around quite disdainfully I heard a golden-hair-streaked aunty from South Delhi complain: “There is no excitement anymore, yaar. I think I should go to Dubai or America. There is nothing to buy here for more than a 1,000 pounds!”

If the UK loses its Indian and Chinese women shoppers, it will certainly leave a huge hole in the economy.

But for those of us who love art, cinema and theatre world in the UK — things are improving. We had the latest Bond film premiered in London and breaking all records at the box office. Stream as much you like but there is nothing to beat watching a film in a darkened movie hall. Theatre is slowly coming back to life and we may even step out for some art exhibitions. And if there are fewer people visiting London, I am not complaining as one will get tickets for everything with ease.

And then hurrah, what great news to see the Nobel Prize for literature go to a British author who writes on refugees and colonialism — subjects on which we have also worked on for years at the Partition Museum in Amritsar, and now Delhi. Seventy-four-year-old Abdulrazak Gurnah, received it as his writing reflects the “uncompromising and compassionate penetration of the effects of colonialism and the fate of the refugee in the gulf between cultures and continents”.

Having grown up in Zanzibar — he fled the country as an 18-year-old. He began writing while a 21-year-old refugee and eventually wrote 10 novels. Till his recent retirement, he taught the themes he wrote about as professor of English and postcolonial literatures at the University of Kent. His publishers (the ever energetic Bloomsbury) rued the fact that his work did not get the recognition it deserved — till one fine day he got the phone call announcing he had won the 840,000 pound award. It would make a wonderful footnote to a life that has yet much more offer. Though it may be difficult to meet him now — one hopes to knock on his door soon (but only after reading his latest book Afterlives) — and discuss his views on the refugee experience.