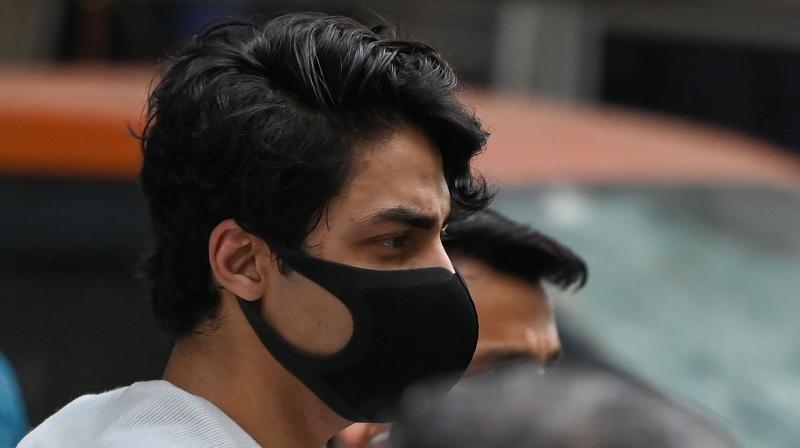 From a drug bust based on a tipoff, the narrative has now shifted to a Hindu-Muslim witch hunt in which an innocent young man is being targeted by the agencies for being the son of India’s iconic Muslim movie superstar — Shah Rukh Khan. (AFP)

Devaa! Devaa! We are still desperately trying to connect all the dots in the complicated Aryan Khan case, and failing miserably. The latest being the hiring of super lawyer Amit Desai, and the alleged firing of dynamite lawyer Satish Manishinde by Aryan’s father, Shah Rukh Khan. The bald truth in this matter is that nobody really knows what’s going on. And everybody is hoping that at least the Main Man (Sameer Wankhede) is on the right track and will divulge significant information at the right time. As of now, it’s all guesswork by self-styled experts attributing motives left and right. This is fine, had it not been so dangerous.

From a drug bust based on a tipoff, the narrative has now shifted to a Hindu-Muslim witch hunt in which an innocent young man is being targeted by the agencies for being the son of India’s iconic Muslim movie superstar — Shah Rukh Khan. I am not calling SRK the “biggest” or the “greatest”, since that would lead to another debate from the fans of Salman Khan and Dilip Kumar. Let it just be said that this new thread is disingenuous, dishonest and downright dangerous. Creating religious divisiveness during an ongoing criminal investigation opens up a Pandora’s box (box, not papers!). It also shifts the focus away from what the Narcotics Control Bureau is doing, to a far more sinister theory that can blow up and get out of control if encouraged.

Several commentators have been propagating this peculiar point of view in an unseemly and highly cavalier fashion — from the safety of distance, of course. Most of them happen to be Muslim, which is why the worry is that much greater. Shah Rukh Khan has been the unchallenged Badshah of Bollywood for decades. Nobody had a problem with his status or religion. If the idea is to dethrone him today or at any rate to diminish him in the eyes of his fans, there are easier ways for government agencies to do it. They don’t have to go after his son. They can directly go after him! Not that it hasn’t been tried. Co-opting movie stars and sports stars as informal brand ambassadors and spokespeople for the ruling party is an old, old ploy. The Congress did it most blatantly and successfully, decades ago. Rewarding pliant, pliable people from the movie/sports industry with government recognition like the Padma awards, Rajya Sabha nominations, land grants for projects that may never see the light of day — all these are purana games that netas play with people who enjoy mass popularity. There are enough mega stars in Bollywood who have sold their souls to the government in power and have been richly compensated. No wonder they have chosen to remain silent today and not stand by a colleague in his most trying hour. Besides, what does anybody know about the recreational activities of their children? Silence is a personal option — and no quarrel with those sitting on the fence. But to inject a religious note into the script is a nasty tactic, one which should be shunned by those who abhor dirty politics.

It has reached such a high-pitched stage that NCB’s Sameer Wankhede’s religion is being avidly discussed in polite circles (ummm, a few still exist). Why does he visit a kabarastan, they ask with some agitation. Oh — because his mother is buried there? She died in 2015, right? So, was his mother a Muslim? Then, what is he? Did he convert? If he is a Muslim, why is he after another Muslim and his son? See what I mean?

Mr Wankhede says he is being followed to the kabarastan by Mumbai cops -- but who has set the cops on the NCB guy. Maharashtra’s home minister Dilip Walse-Patil has hotly denied the “stalking” charge but has promised to “look into it” (sure, bro!). Mr Wankhede’s personal info on social media platforms is sketchy, strange and incomplete. It mentions he is from the Kunbi caste (which is identified as an OBC in Maharashtra). In one entry somewhere, his religion is described as “MARATHI” (errr… what is that?). His sister’s name is Yasmeen, and the names of his brothers are missing. His father’s name is Dnyandeo, his mother’s name is not listed. And yes, Sameer can be either a Muslim first name or a Hindu one. But, wait a minute — his religion is his business. Everybody’s religious beliefs ought to remain deeply personal. It is vulgar to ask! Does Sameer Wankhede visit mosques? Say namaaz? Are his daughters (Zyda and Ziya) Muslim? What about his lovely actor-wife Kranti Redkar? Muslim or Hindu? Gawd!

It’s a shame Mehbooba Mufti hastily jumped into the Hindu-Muslim controversy in this high-profile case (“Aryan Khan is being targeted just for his surname”). Yes, she is facing legal action, but the damage has been done. Others who are using the social media to promote this kind of thinking are being as blatantly communal. Perhaps, this is actually helping the agencies working on the case.

For all we know, the investigation is on to something much bigger than SRK being a Muslim. Side tracking may serve a purpose, after all. When political gurus whisper sotto voce that SRK is being “punished” for not playing ball, it is important to ask -- not playing ball with which political party? His closeness to West Bengal’s Didi is not a secret. Why has Didi remained silent? Or his old buddies, the Gandhis? Priyanka used to be a frequent visitor to Mannat. Why is she chup and providing photo ops doing jhadoo, when, as a close family friend, she could have extended support without going into the merits of the case.

Like I said at the start, all this is wild conjecture. Everyone has a theory, but nothing to substantiate it. The dumbest theory of all -- and the easiest to exploit -- is the Muslim theory. I mean, take a look at some of the people who have cooled their heels in the very same prison (Arthur Road Jail), recently. Raj Kundra is not a Muslim. Unless he is being “targeted” for being a Hindu. Oh… and when will the name of the jail be changed? Arthur Road is so colonial, dahling. Let’s call it … never mind! Guaranteed it won’t be named after any Hindu -- okay?

Happy Vijaya Dashami, readers... and may good triumph over evil!