Opinion   Columnists  15 Mar 2017  View from Pakistan: How to deal with a violent phase
Opinion, Columnists

View from Pakistan: How to deal with a violent phase

Memorials will require Pakistan to disambiguate its attitude towards the extremism that claimed innocent lives. 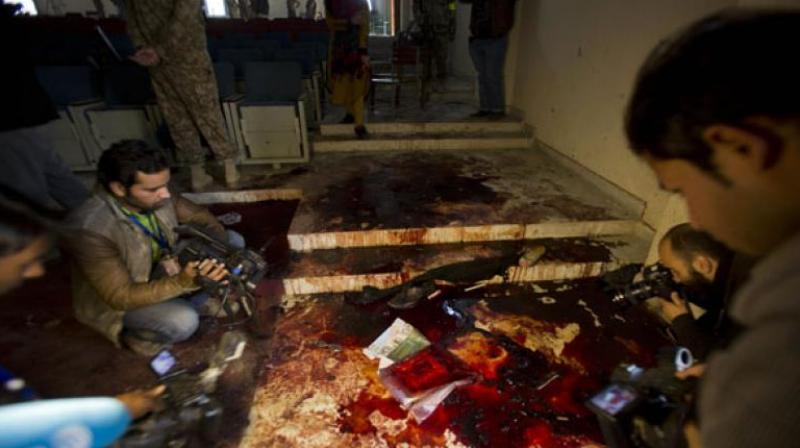 Pakistani journalists film and photograph inside an auditorium of the Army Public School attacked the day before by Taliban gunmen, in Peshawar, Pakistan (Photo: AP)

Last week, with two hours to spare in Oslo, Norway, I had the choice of visiting a Viking ship museum, palace gardens and, on a more surreal note, the 22 July Centre — an exhibit about the twin terrorist attacks that took place in the city and Utoya island in 2011 (I opted for the gardens).

The centre opened in 2015, four years after Anders Behring Breivik detonated a car bomb at a government office, killing eight people, and then went on to open fire at a political party’s youth wing gathering on Utoya island, killing 68 people, mostly teens. The exhibition includes objects used by Breivik during the attacks — including his fake police ID and remains of the van containing the bomb — and a memorial to the victims, including photographs, phones and cameras left by the teens on the island.

The exhibit stirred controversy at the time of its launch, with opponents arguing that it would become a “hall of fame” for Breivik. Others argued that Norway should forget the incident and move on.

However, speaking at the inauguration, the prime minister argued that Norwegians had a moral obligation to remember the events. Many countries have grappled with how to commemorate the victims of terrorist attacks. There was relative consensus on the decision to have the Freedom Tower replace the World Trade Centre in New York City, though it was marred by the “Ground Zero mosque” controversy.

Victims’ families in Paris, meanwhile, welcomed the unveiling of commemorative plaques on the one-year anniversary of the November 2015 terrorist attacks, saying they did not want their loved ones erased from memory. No matter the circumstances such memorials are challenging to design, requiring a careful balancing between remembering and forgetting, commemorating victims without glorifying the event respecting victims’ families’ memories while acknowledging impact on a nation’s conscience.

It is possible for countries that have experienced one-off, high-impact attacks to navigate the sensitivities and eventually install memorials, but how should a country like Pakistan, which has lost thousands of innocents to attacks, remember the victims? Following attacks, victims are referred to as shaheed, and prayers and vigils are organised.

Victims of the 2014 terrorist attack on the Army Public School in Peshawar have received more attention: a monument in their honour is under construction at the Directorate of Archives and Libraries in Peshawar, which also houses the slain students’ personal belongings such as books, pens and glasses.

A monument in the students’ memory was also unveiled in Ankara. Dawn has published a moving online memorial to the students. But all the victims of terrorist attacks are equally deserving of commemoration — we cannot relegate them as statistics denoting a particularly dark chapter in Pakistan’s history.

Here’s the rub: memorials typically embody clear narratives. Before Pakistan can commemorate its victims, it must reckon with the origins of home-grown militancy, the state failures that resulted in a decade (possible more?) of horrifying bloodshed, the policies that backfired and ultimately claimed innocent Pakistani lives, and the challenges of reconciling doctrinal difference through democratic inclusion and rule of law.

Memorials will require Pakistan to disambiguate its attitude towards the extremism that claimed innocent lives. There are still voices that defend the actions of militant groups such as the TTP and see violence as a necessary evil. More problematic would be commemoration of the victims of sectarian attacks, some of whom are perceived by certain compatriots as misguided or even heretical.

APS victims have likely received due attention because there is no disagreement about the horror of that attack and the fact that murdering schoolchildren is brutal and unjustifiable.

For all the difficulties that remembering presents, Pakistan must not forget this phase in its history, its unfortunate victims, and the shaping circumstances. As a nation, we are quick to amnesia, and willing to let our history be rewritten and reinterpreted to cynical ends. It will be hard for individuals to forget the terrorism that the nation has endured. But we must remember collectively, publicly, to ensure that this painful stage in our trajectory is not co-opted or corrupted in the service of future agendas and misadventures.

Memorials would also present the government with an opportunity to restore dignity to citizens who are too often subsumed by bureaucracy, clan or tribe identity, and the vagaries of political elites. An effort to acknowledge everyone who has been affected by terrorism will demonstrate sincere regard for every Pakistani life, and serve as a reminder that the state takes its responsibility to ensure the protection and prosperity of its citizens seriously.

By arrangement with Dawn.