The political rallies and religious snans could easily become super-spreader events. Some perhaps already have 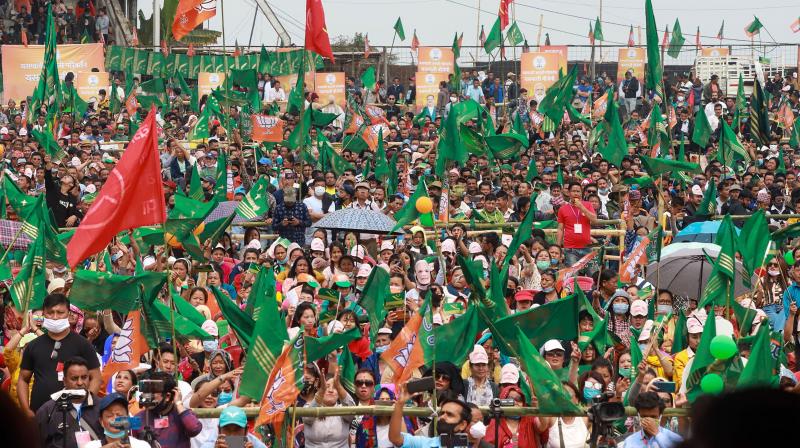 The electoral rallies with several lakh people that were held till very recently in Kerala, Assam and Tamil Nadu and which will continue to dominate the political horizon in West Bengal for the rest of this month. (Representational Photo: PTI)

Nowhere are politicians perfect. They all make mistakes. Though they may atone for them later, usually in defeat, they’re almost always disinclined to apologise. But I’m not put off by that. If you want them to take decisions, some are bound to be wrong. That’s a fact of life. But what irks me is irresponsibility. In particular, refusing to take tough decisions because it does not politically suit them to do so. For this there can be no excuse and little forgiveness.

Faced with the raging second surge of Covid-19, which is relentlessly soaring at nearly 200,000 cases a day, our politicians have behaved irresponsibly. Worse, they continue to do so. Undeterred by criticism from the media and grave warnings from doctors and public health experts, they are now passing the buck.

What am I referring to? The electoral rallies with several lakh people that were held till very recently in Kerala, Assam and Tamil Nadu and which will continue to dominate the political horizon in West Bengal for the rest of this month. But I am also talking of the Shahi Snans, which have started in Haridwar and will continue for another two weeks. Like the political rallies, these religious baths will attract hundreds of thousands of people, if not millions, and there will be no social distancing and precious little mask wearing.

The rallies and snans could easily become super-spreader events. Some perhaps already have. Others are likely to follow. But even if by some miracle that doesn’t happen, is it worth the risk? That may sound like a rhetorical question but, quite frankly, it is not.

So why are they permitted? Let’s take the political rallies first. They are an easy, simple and time-tested way of attracting large crowds and addressing them at one go. They also attract television attention and newspaper coverage. Therefore, they get talked about and that, it’s hoped, will create political momentum. This is why politicians are so reluctant to abjure them.

In comparison, virtual campaigning is more difficult, the response isn’t easy to assess, and it doesn’t create any buzz. Therefore, citing the excuse of democracy, our politicians have continued to physically campaign as if the Covid-19 pandemic belongs to another and far-off world.

In fact, when questioned they’ve either been defiant, or they have blamed the Election Commission. This is what Hemanta Biswa Sarma said earlier this month: “There is no Covid in Assam ... there is no need to wear a mask in Assam. Why wear masks unnecessarily and create a panic?”. Incidentally, he is the state’s health minister.

Days later, at a press conference in West Bengal, Union home minister Amit Shah was asked how he justified massive political rallies when the virus was surging past 100,000 cases a day. (Since then, it’s crossed a yet higher peak of nearly 200,000 a day.) Without a blush or a moment’s hesitation, he said the question should be asked of the Election Commission. It has set the rules and guidelines and his rallies are fully in accord with them. Sadly, I don’t recall any journalist asking Mr Shah if this is an adequate answer from the nation’s home minister or simply an irresponsible attempt to pass the buck.

A day later the commission spoke out but almost sotto voce and certainly ineffectively. As a national newspaper put it, the commission “will not hesitate in banning rallies and meetings if precautions are not adhered to”. Not surprisingly, they weren’t, and equally unsurprisingly the commission retreated to its earlier convenient silence. And so the irresponsibility continues.

Now, let’s come to the shahi snans. When Tirath Singh Rawat took over as chief minister of Uttarakhand, he dispensed with his predecessor’s insistence on a prior Covid test before participating in a snan. “Nobody will be stopped in the name of Covid-19 as we are sure that faith in God will overcome the fear of the virus”, he glibly though very confidently told another national newspaper. Days later he tested positive.

Meanwhile, one newspaper, quoting government officials, said one crore people were expected to visit Haridwar on April 14, which was Baisakhi, whilst two crore more were anticipated between April 11 and 14.

Photographs and WhatsApp clips showed that in fact happened. I fear they could soon realise the truth of the old cliche “God helps those who help themselves”.

The government will tell you that banning or even restraining the long-awaited and deeply loved religious events is hard to do. Of course it is. It could make governments unpopular. In a democracy, no one wants that. But then who said that being Prime Minister or chief minister during the worst health crisis in a century is easy?  Yet, if British PM Boris Johnson could enforce stringent curbs over Christmas and Germany’s Chancellor Angela Merkel during Easter, do Prime Minister Modi and CM Rawat lack the strength to behave similarly? If Mr Johnson and Ms Merkel can take unpopularity on the chin, are our netas made of weaker stuff? Or could it be that our lot have deliberately chosen not to act because not only is it easier not to do so but that will also ensure that they remain the darling of the masses?

Finally, just one question remains: how heavy a price will we pay for this irresponsibility? We know the damage the rallies and snans could do can only be estimated two weeks later. That’s not too far away. But chances are… it won’t be the politicians who will suffer. It will be the poor people of India. The former will bask in their electoral triumphs or boast of their administrative expertise. The latter could end up infected, with sickness and possibly worse to follow.

And then? Before you answer, remember, this is India. I doubt if anyone will hold the errant politicians to account. They come from all our political parties and they’ll all get away with it. But it’s likely to be very different for the majority, who are poor. If they get infected, fall ill and even die, who will care for and mourn them? They’ve paid the price of political incompetence for generations, possibly centuries. And as they’ve always done, they’ll pick themselves up, place their faith in God and carry on. I doubt if this time will be any different.