Indo-Nepal relations would need careful nurturing after the foolhardy gambles of 2015. 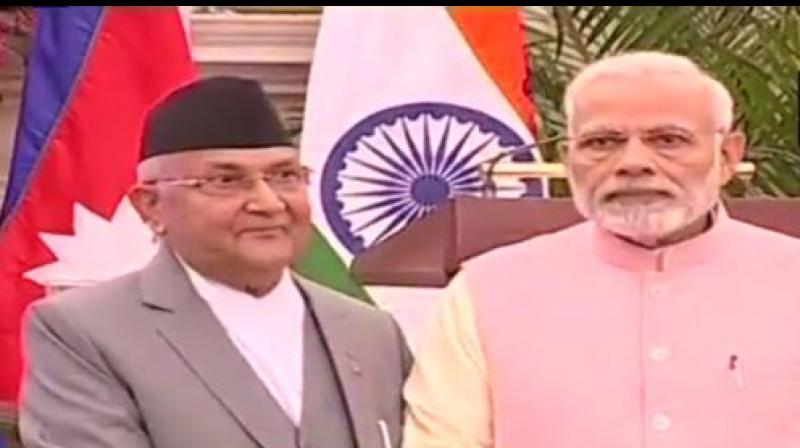 Prime Minister Narendra Modi’s just-concluded May 11-12 visit to Nepal, the third to the neighbouring country since he took office four years ago, was exceptional as it came just five weeks after Nepal’s new Prime Minister K.P. Sharma Oli had visited India. This is rare, as usually visits by heads of government are spaced apart to allow for preparatory work or followups on the decisions taken.

The necessity for Mr Oli’s visit to India was apparent as the victory of the combined Communist front in the parliamentary election had raised serious concerns in New Delhi that pro-China political forces had gained the upper hand in Kathmandu. When Mr Oli assumed office as Prime Minister on February 15 this year, one of his first acts was to invite Pakistan’s Prime Minister Shahid Khaqan Abbasi to pay an official visit, which he did. The two largest Communist parties — the CPN(ML) led by Mr Oli and the CPN (MC) led by Mr Prachanda — had not only fought the election as allies but then announced a merger. The orientation of Mr Oli as pro-China in the past was also seen in New Delhi as a bad omen for Indo-Nepal relations. Thus, it was not surprising for Mr Oli to reach out to Prime Minister Modi and allay some genuine concerns, created by the optics of Mr Oli’s actions and statements. For instance, as I learnt during a speaking visit to Nepal in early April, Mr Oli in his public speeches was given to rabble-rousing against India, particularly by taking potshots personally at Mr Modi.

From those depths to Prime Minister Narendra Modi singing paeans of eternal friendship last weekend and making the return visit within five weeks of the Oli India trip is quite a change. India’s foreign secretary Vijay Gokhale explained that Mr Modi’s visit was planned soon after Mr Oli’s election victory when Mr Modi rang him up to congratulate him. Mr Modi said as he landed in Janakpur, known as the birthplace of “Ma Sita”, that he came as a “Prime Pilgrim”. He announced a massive Rs 1 billion development assistance for Janakpur and a plan for linking the city to Lord Ram’s city of Ayodhya. According to this reasoning, it is Mr Oli who decided to drop by to perhaps allay Indian concerns after Mr Abbasi’s visit and India perceiving a Sino-Pakistan convergence developing in a crucial buffer state that has an open border with India. The timing does, however, raise a question that the Congress Party forcefully argued — that it was peculiar that as voting began in the crucial southern Congress redoubt of Karnataka Prime Minister Modi started his Nepal visit as a “Prime Pilgrim” than as Prime Minister.

Not satisfied with this initial foray into religious diplomacy, Mr Modi then headed for a second darshan to Pashupatinath and a first visit by any foreign leader to Muktinath, which is revered by Hindus and Buddhists. Although this was a shrewd way to convey to Nepal that, unlike China, India has deep cultural and religious links with the Nepalese people, the timing left some questions in India unanswered about the propriety of such heavy religious dosage on the day of a crucial state election. Moreover, the Nepalese Communists are hard-knuckled street fighters who are unlikely to forget or easily forgive the popular ire they share over what they see as India’s participation in the blockade of their border in 2015 to put pressure during their Constitution-making process. It is generally seen in Nepal as a ham-handed Indian attempt to put pressure, on behalf of the Madhesis whose links to the population in Uttar Pradesh are more intense and personal, on Constitution-making in Nepal after centuries of rule by autocrats. The Nepalese social media was astir during the entire Modi visit, churning just that angst. Nepal would have closely assessed the Modi-Xi Jinping “informal summit” in Wuhan and may thus still use the Chinese to balance India, but would possibly do so with discretion and perhaps without adopting provocative measures.

Prime Minister Modi has carefully unfurled a shrewd Indian counter-measure insofar as Nepal is concerned to the Chinese Belt and Road Initiative. India continues to be the largest trading partner of Nepal, with bilateral trade at over $5 billion. But Nepal has had serious concerns about the Trade and Commerce Treaty of 1950, which was revised in 2009. India has held out the tempting prospect of an oil products pipeline, which should give Nepal some energy security. The announcement of 900 MW Arun 3 hydropower project is another step to both make Nepal energy independent but also alleviate power shortage that have hindered investment. Traditionally, Nepal has resisted hydel-power projects as I remember the late King Birendra telling then visiting Indian President Zail Singh in 1986 that such projects consume much-treasured valley land which was needed for food security and livelihood. Bhutan, on the other hand, with a smaller population, has turned its hydel potential into a money-spinner. The CIA has estimated that Nepal’s hydel power potential is over 42,000 megawatts.

Essentially there is no way that China can any longer be kept out of the India-Nepal equation. Connectivity to Lhasa is inevitable. China also realises that for its investments in Nepal to be productive, the salient must connect to India. For India, with its open border with Nepal, Chinese investment in manufacturing in Nepal will have be closely watched. Perhaps the Modi-Xi summit is a preliminary way to assess what Sino-Indian relations mean for the rest of South Asia. Religious glue is useful but will be a poor defence against the Chinese economic juggernaut.

That is why Prime Minister Modi announced that a revision of the India-Nepal Trade Treaty is still under discussion. Railway and river projects for better connectivity will also take time. Indo-Nepal relations would need careful nurturing after the foolhardy gambles of 2015.