Abhijit Bhattacharyya | Arms and the West: Global effect of the war in Europe

The ongoing European conflict is a grand opportunity for the arms makers, suppliers and middlemen to make their mega bucks 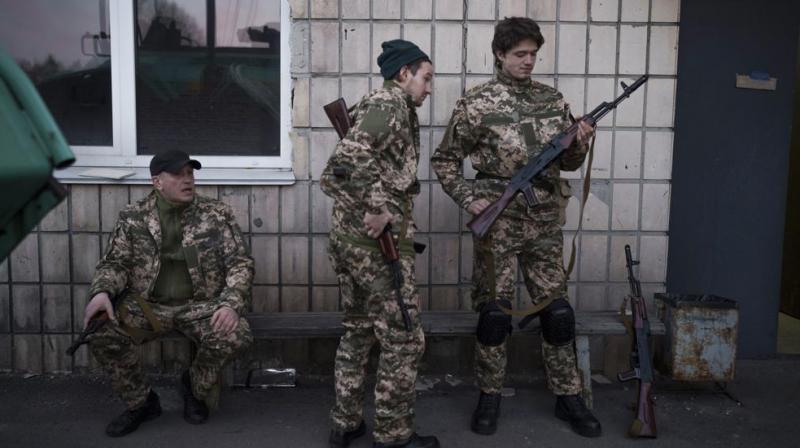 The war in Europe certainly offers the prospect of mega bucks in future arms bazars, and particularly for the manufacturers of machine guns and other merchants and ministers. (AP File Image)

The Bengali proverb “karo poush mash, karo shorbonash”, that implies “development for one is disaster for another”, is now playing out in the heartland of Europe amid the Russia-Ukraine conflict. As belligerents do battle, God knows for what, the choked food supply lines lead to famine for non-Western countries, and guaranteed profits for the West’s arms manufacturers. The latter’s rising value has already lit up world stock markets. To rush weapons and ammunition to besieged Ukraine, the Nato-European Union combine is busy multiplying military budgets and stepping up arms purchases and production.

The ongoing European conflict is thus a grand opportunity for the arms makers, suppliers and middlemen to make their mega bucks. The same Europe which had bolstered military contractors and corporations in the two World Wars lay behind the astronomical profits of the US “military-industrial complex”, which has been ruling the world since the 1940s.

Ironically, the very profit and loss of the arms bazar is indelibly linked to Moscow since the beginning of the Cold War. The military-industrial complex, whose dangers were most famously highlighted by late US President Dwight D. Eisenhower, thrived during the Cold War, with the West and Moscow at loggerheads, on tensions, terror and territorial violation in the Third World. Today, however, the West-created “world order” appears under unprecedented threat as it takes a severe beating.

Moscow had collapsed in 1991, but more surprising was the collapse of the carbine companies’ market on both sides. First, the US arms industry structure changed drastically. Fourteen top military contractors shrank into nine; and of these, four aerospace/electronics giants — Boeing, Lockheed Martin, Raytheon and Northrop — consolidated their position as prima donnas. With a drastic reduction in the Moscow-Washington rivalry, the arms giants combined their resources for sheer survival. Without war, tensions and rivalry, sales would be below par and profits would be hit, leading to production cuts and retrenchment. The USSR’s fall cast a gloom over world defence promoters as Moscow’s arms bazar went into recession. Overnight, Russia’s 6.4 million-strong industry shrank to three million employees, as military production fell 66 per cent in 1991-1994. By end-1995 Russia’s electronics/communications gear fell almost 80 per cent from 1991. But Russia survived!

Major US military contractors were hit too as conflict threats reduced. The mega companies resorted to restructuring, mergers and acquisitions and employee numbers were cut. Yet America remained the world’s top arms producer. Of the 100 top arms-producing companies in the OECD, 46 belonged to the US; followed by France 18, UK 13; Germany 11 and Japan 10. Not a single Russian company was on the list.

One only wonders how with an egregious economy, declining defence, puerile polity and depleted demography, Moscow managed to retain its sovereign status in one piece. Perhaps the fear of the nuclear button in the hands of psychologically bruised and battered bosses saved Moscow.

The times have, however, changed, and so have the actors. But what’s in store for the belligerents and those in the vicinity and beyond? The US still rules the arms trade, and Europe follows. From 100 in 1995, as of 2019 there are 25 top arms-producing companies, of which 12 are American. Of the rest, four are Chinese and two each Russian, British and French; one is Italian and one trans-European. And 11 of the 12 US manufacturers are now profitable, thanks to the wars in Asia and Africa, including the two-decade-long war in Afghanistan. The latest SIPRI figures reveal that all the top 25 arms company sales are on the upswing; especially since 2015.

As the current European conflict is unlikely to abate anytime soon, it will not be wrong to suggest that those raking in cash in conflict times won’t mind its continuation. This only proves that “development for one can be disaster for another”.

The war in Europe certainly offers the prospect of mega bucks in future arms bazars, and particularly for the manufacturers of machine guns and other merchants and ministers. Everyone is entitled to make money in the new “world order” of free markets. But in the process, the world outside Europe is getting crushed, with its finances, food and fuel supply and factories getting hit. It has exposed the ugly side of globalisation, liberalisation and privatisation, with the after-effects of the economics of warfare there for all to see.

As the insurmountable problems beyond the war zone threatens millions of lives, how does one justify the co-existence of globalisation as well as sanctions? Is the business of sanctions by the West a matter of selective picking and choosing? It is alleged that food is being “weaponised” by Russia. But long before that, the West has been wantonly “weaponising” its technology and finances and flexing its economic muscle, and acting ruthlessly and dictatorially, insensitive to all and sundry. “Don’t buy fuel from X; don’t deal with Y; don’t you dare be seen with Z”?

Why is the United States, along with Nato and the European Union, trying to target India? When the 60-nation Nato-EU combine, with a combined population of 800 million, is way short of India’s 1.35 billion, it’s time for the West — for Washington, Brussels and fellow travellers – to drop their oblique threats to New Delhi. The Ukraine war is essentially a European issue, not a global one. It shouldn’t be needlessly globalised. Globalisation is for all-embracing strategic development, not for national destruction. Sanctions and globalisation can’t, therefore, go together.

Is the West serious about bidding a “farewell to arms”, the line made famous by Ernest Hemingway? It seems unlikely. The West has a sorry track record, from the eighteenth to the twentieth centuries, of trying to impose its will by force in various parts of the globe. It does not occupy the moral high ground, after its naked imperialism, to sermonise the world on rules and principles. As India’s external affairs minister S. Jaishankar had recently noted, it ill behoves Europe, which till the other day was the biggest consumer of Russian oil and gas, to hector poorer countries not to do so. Why should they not “go into the market and get the best deal for (their) people”? It’s high time for the West to resolve its own local dispute rather than try to drag the rest of the world into a local war in Europe, and perhaps destroy the entire planet in the process.