Waqyanawis | It’s official: Equal credit must go to all for Rajasthan rapprochement

Acknowledging Sonia Gandhi’s leadership, the AICC head of media and communication attributed the resolution of the crisis to Rahul Gandhi 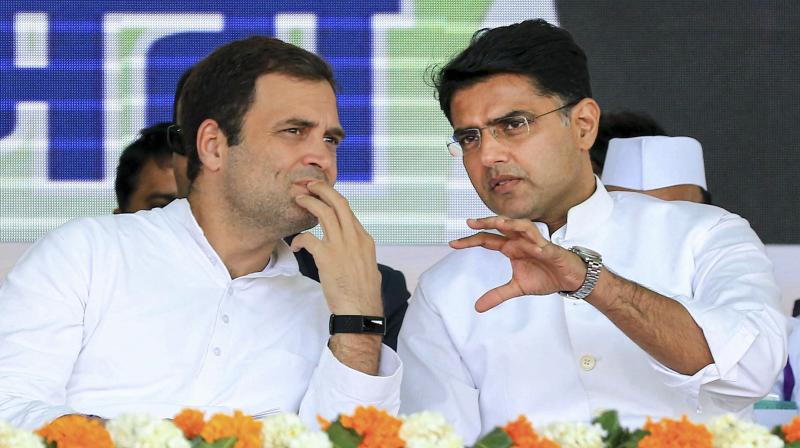 In this file photo the rebel Congress leader Sachin Pilot (R) is seen with the then Congress President Rahul Gandhi during a rally in Jaipur. PTI Photo

The truce in Rajasthan has posed a piquant situation for Congress Party spokespersons. There were three Gandhis who were to be credited. In addition, Ashok Gehlot and Sachin Pilot were both to be praised. Randeep Singh Surjewala led by example.

Acknowledging Sonia Gandhi’s leadership, the AICC head of media and communication attributed the resolution of the Rajasthan political crisis to Rahul Gandhi and thanked Priyanka Gandhi for her role in it.

In one single line. Next he went on to admire both Gehlot’s large-heartedness and Sachin Pilot’s prudence. A template was set.

Many Congress leaders, particularly in-house TV talking heads, are worried these days as fulsome praise for Priyanka Gandhi has the potential of upsetting Team Rahul, as her brother is all set to return as the 87th president of the Congress Party.

Jyotiraditya Scindia seems to be getting restless over the delay in his induction as a Union Cabinet minister.

The Scindia camp is now mounting pressure in the guise of the Madhya Pradesh Assembly bypolls, arguing that the former Maharaja of Gwalior’s induction in the Narendra Modi government would enhance the BJP's prospects in 27 assembly seats.

Some overenthusiastic supporters are even sending messages that Scindia would get the railways portfolio.

An internal BJP survey has reportedly given the ruling BJP a mere 50 per cent chance of success in the Madhya Pradesh bypolls.
Overdue bypolls

The future seems tense for some BJP ministers in Madhya Pradesh. There is no sign of the bypolls in the state even as the clock is ticking. There are 14 ministers in the Shviraj Singh Chouhan cabinet who are not members of the Assembly. If the polls are held by September-end or early October, senior ministers belonging to the Scindia camp, Govind Singh Rajput and Tulsi Selawat, may lose their ministerial berths.

Filmmaker Mahesh Bhatt is an unhappy man these days. More than the controversy over Sushant Singh Rajput's death or various nepotism allegations, Bhatt is upset over the news of Sanjay Dutt’s lung cancer. For him, Sanju has been like a son.

What offends Bhatt the most is the venom and organised hate spewed against the trailer of Sadak 2 in which Sanjay Dutt is playing a lead role. Why can't Sanjay Dutt be spared in his vulnerable state?

Pranab Mukherjee’s serious illness has been become a cause of concern for many, cutting across party lines.

He has been a towering figure in national politics from the days of Indira Gandhi to the Narendra Modi era. As former president, Bharat Ratna and a union minister for decades, Mukherjee had a unique position to talk to Modi, Rajnath Singh, Sonia Gandhi, Mulayam Singh Yadav, Nitish Kumar, Sitaram Yechury, K Chandrasekhar Rao, Chandrababu Naidu, and Mamata Banerjee with equal ease. For the Congress, Mukherjee remained a father-figure even after becoming ‘apolitical.’

His daily appointments used to have a heavy dose of visitors from the grand old party seeking his informal advice.

Sanjay Jha is a worried man. Suspended from the Congress party for speaking and writing out of turn, he was repeatedly counting a lot on Sachin Pilot and other dissidents. With Pilot’s ghar wapsi, Jha’s hopes are now with Shashi Tharoor and Manish Tiwari batting for internal party democracy.