In north India prior to 1950, the main patrons of the arts were the rulers 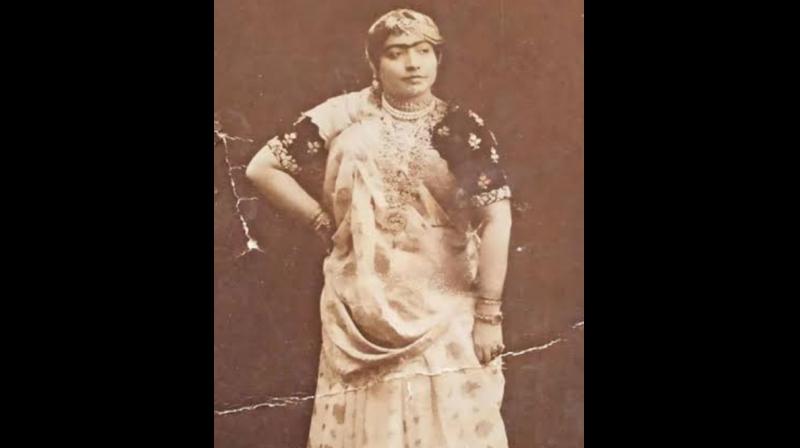 Interestingly, there were several famous female musicians in this category, including Gauhar Jaan, followed by Kesarbai, and still later by Begum Akhtar, who commanded huge fees, sometimes exceeding those of their male counterparts. Gauhar Jaan. (DC Image)

In 74 years of freedom, the world of performing arts has seen unprecedented changes. In north India prior to 1950, the main patrons of the arts were the rulers. A few “music conferences”, as these were called, were held annually in several cities; there were also musical celebrations in temples on religious occasions, but it was the princely courts that provided musicians a sustained means of livelihood. The artiste was paid a grand salary, had a wonderful home to live in and, in return, performed in the ruler’s court on a daily or occasional basis. They were also encouraged to travel to other states to perform and, indeed, the princes vied with each other to send their superbly skilled, highly-sought-after master musicians to the brother princes’ court celebrations. Many were highly prized and awarded handsomely with medals (Ustad Faiyaz Khan’s medals would do any military general proud!); the musicians, in turn, honoured their patrons by including the kingdom’s name in their descriptor, underplaying their musical lineages. Thus one hears of Ustad Hafiz Ali Khan of Gwalior, Ustad Faiyaz Khan of Baroda and Ustad Allaudin Khan of Maihar, among others. It would not be wrong to say that the link between musician and patron was akin to a filial bond.

One recalls reading how the Maharaja of Maihar named Ustad Allaudin Khan’s daughter Annapurna. In another, similar, instance, Ustad Vilayat Khan meticulously recounted being sent a small token amount every month by the Maharaja of Gauripur. This was despite the fact that he had personally never been a court musician in Gauripur, only his father, Ustad Inayat, had. Kr Birendra Kishore Roy Chaudhury, the Gauripur prince and himself a musician, valued the association and wanted to keep it alive. When Ustad Vilayat Khan demurred, saying he was earning well, the prince laughingly insisted, famously uttering the words, “keep it for your paan expenses”!

Those musicians who were not formally attached to any one court used to travel from state to state hoping to catch the attention of a benevolent patron. Interestingly, there were several famous female musicians in this category, including Gauhar Jaan, followed by Kesarbai, and still later by Begum Akhtar, who commanded huge fees, sometimes exceeding those of their male counterparts.

Princely courts were not the exclusive domain of the musician; Padma Bhushan Pt Gokulotsav Maharaj of Indore represents a still older tradition; belonging to the Vaishnava temples in the north. The Vallabhacharya tradition, started in the 14th century, of linking every temple “sewa” throughout the day with music was a powerful one; all in strictly classical style, with authentic “raga” and “taal”. “Ustad Amanat Ali Khan of the Bhendi Bazar gharana, Ustad Faiyaz Khan of Agra gharana, Ustad Alladiya Khan of the Jaipur Attrauli gharana — all have included our compositions in their concert repertoire,” he said. In today’s context, Pt Jasraj sang many “haveli” songs. (this music was referred to as haveli sangeet as the temples of the Lord were housed in havelis to avoid desecration by Muslim rulers). After 1947, though the practice of music in the havelis continued, it has slowly petered out in successive decades and today remains only with a handful of practitioners.

During the 1950s and 1960s, the All India Radio emerged as a huge patron of music; with several cities maintaining their own recording establishments, and holding regular recording sessions. Such was the prestige attached to being an accredited radio artiste that some used to add the suffix “AIR artiste” to their names. Radio recordings were broadcast regularly; sadly, nowadays, one does not have access to this vast treasure of recorded music by masters of a bygone era. Radio stations maintained full-time musicians on their payrolls — including greats such as Ustad Vilayat Khan, Pt Ravi Shankar, Ustad Ali Akbar Khan, Pt Ravi Shankar and so on. The grading of artistes was a serious business, and every artiste strove to achieve the top ranks. In the mid-1960s, Doordarshan, too, started patronising classical musicians; again these rare recordings are seldom shared with the public. Slowly, this patronage petered out, until today neither institution is regarded as a serious patron any more.

During this period, some of the greatest musicians in north India flourished — many the product of an older generation’s decades-old sustained focus (such as Ustad Ali Akbar Khan, Ustad Vilayat Khan, Ustad Asad Ali Khan, Ustad Bade Ghulam Ali Khan, Ustad Amir Khan, Vidushi Kishori Amonkar and Ustad Amjad Ali Khan). A novelty was the emergence of great musicians who had no prior tradition of music; the breaking down of the feudal stranglehold on musicians allowed this change. Pt Ravi Shankar, Pt Bhimsen Joshi, Vidushi Gangubai Hangal, Begum Parveen Sultana and Pt Kumar Gandharva are a few notable first-generation musicians.

Private corporations and state governments provided platforms for concerts during the 1970s through the 1990s. Classical music is today taught in universities, more so since the 1960s across India, but has somehow remained a theoretical subject, by and large, with the rare great performer emerging from the ranks.

Child prodigy flautist Shashank Subramanyam, who has been a performer since the 1980s, finds huge changes in the world of performing arts in the last two decades of the 21st century. The proliferation of broadcasting platforms, and alternate avenues of income are the two most significant. Nowadays, it’s not about being paid for one concert; the broadcasting rights of that can later be used on such a variety of Over The Top platforms, some of which are emerging as we speak, including independent radio, he said. Musicians can stream their own music to an online worldwide audience. The huge income derived from teaching overseas students, electronically, has, in a way, freed a performer from his total dependence on concert organisers, private or state.

One can only wonder about what the future holds for classical music; a tradition that has had to reinvent itself multiple times.