The problem is that India and China never agreed on where the LAC was, as the perceptions of what each side “controlled” varied 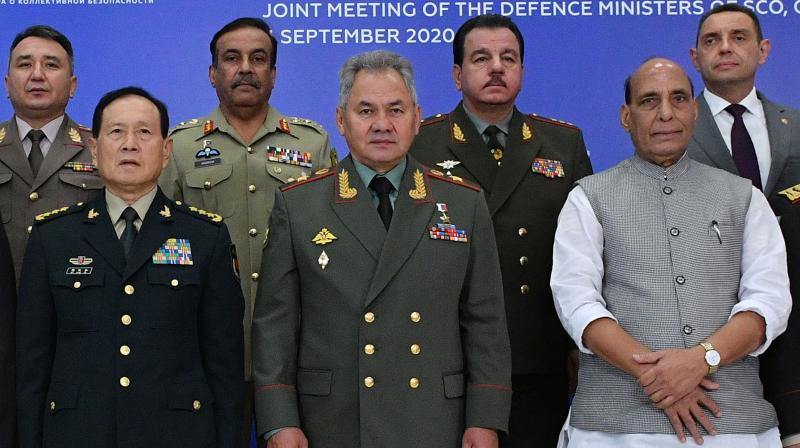 Despite having two often widely overlapping LACs, Indian and Chinese forces had arrived at a unique modus vivendi since 1962 which enabled each side to patrol up to its perception of the LAC without confrontation. PTI Photo

The joint announcement by external affairs minister S. Jaishankar and Chinese foreign minister Wang Yi in Moscow (no doubt helped along by Russian foreign minister Sergey Lavrov) is being clutched at like straws by desperate drowning men hoping for an end to the crisis.

In case we have forgotten, the RIC (Russia India China) was a geopolitical group that was formed to balance growing American and Nato unilateralism. The operative part of the joint statement is that the military commander-level talks will continue. The audible sigh of relief in some circles may be premature, for talking doesn’t mean a solution. For now, it only means a postponement of the armed conflict.

We have two outstanding issues between India and China. The larger one is about large tracts of territory in Ladakh and Arunachal Pradesh. These two territorial disputes aren’t going to be resolved in the foreseeable long term.

Hence, Deng Xiaoping had sagaciously suggested to Rajiv Gandhi at their 1988 Beijing meeting that it is best left to history.

The pressing dispute on hand are the two overlapping Lines of Actual Control. The term LAC was first used by Zhou Enlai in November 1959 when he wrote to Jawaharlal Nehru defining it as “the so-called McMahon Line in the east and the line up to which each side exercises actual control in the west”.

The problem is that India and China never agreed on where the LAC was, as the perceptions of what each side “controlled” varied, by a few meters to tens of kilometers. For instance, in Sikkim where they vary at a few places, the actual overlap often is a few meters.

This variation is because both sides are vying for better tactical positions to locate their bunkers and sangars (small built-up structures) on higher ground to observe the other side. In the Depsang Plains overlooking DBO, it is by as much as 20-30 km.

The DBO overlooks the Chip Chap river as it curls southward to its rendezvous with the Shyok. The entire Chip Chap river was accepted by China as Indian territory even in 1956, but by 1960 China advanced its LAC to about 4 km of DBO and built a garrison at Tianwendian, about 24 km away.

The PLA launches patrols from here into the contested Depsang. They have done the same in Galwan valley. In 1962 the Indian post was at the source of the Galwan river at Samzungling and the LAC is now about 2 km upstream of the confluence of Galwan and Shyok rivers.

Despite having two often widely overlapping LACs, Indian and Chinese forces had arrived at a unique modus vivendi since 1962 which enabled each side to patrol up to its perception of the LAC without confrontation. The desire for peace made both sides cobble up agreements from time to time.

The 1993 agreement made it incumbent for both sides to caution each other whenever their perceived LACs were crossed. Though the agreement stipulated that any dispute both sides would jointly check this and decide upon an alignment, it never happened. Then in 1996 both sides agreed to “exercise restraint when the patrols come face to face”.

This worked till 2013, when the PLA objected to the Indo-Tibetan Border Police leaving behind reusable shelters at a place called Chumar.

In May that year a tailed PLA patrol decided to dig in midway between the two LACs in Depsang at a place called Rakhi Nula. This forced an Indian Army unit to dig in nearby.

This crisis was resolved by a meeting between the local military commanders, with the Indian side agreeing to dismantle the Chumar structures and the PLA pulling out. This led to the more complex 2013 agreement, once again aimed at conflict prevention nd conflict resolution, but not fixing the cause of conflict.

This is where we were when the PLA, taking advantage of Indian Army tardiness in not mirroring the annual PLA exercises in the area, dug in positions in Galwan Valley, Hot Springs, Ghogra and between Fingers 4 and 8 on Pangong Tso’s northern bank. In Galwan the new PLA position is now less than 2 km from the upgraded 230-km-long road from Darbuk to DBO. The Indian Army has now positioned itself threateningly on the Chushul heights.

The timing of the crisis couldn’t be worse. India was in the midst of a major economic meltdown brought about by the spread of the Covid-19 virus from Wuhan. The electronic media, no doubt prodded by the Narendra Modi government, went into a fury over the “Chinese perfidy” and both Modi and defence minister Rajnath Singh made fire and brimstone speeches ostensibly to the troops in Ladakh. The Indian military buildup was under the full glare of the embedded media and newly acquired military hardware were displayed. Like angry Bharatanatyam dancers, both sides are now semaphoring intentions to each other.

Simultaneously, Indian Army and PLA commanders have been in talks from June 16 seeking a disengagement. The question is who withdraws and to where? This requires the determination of a single LAC.  This is beyond the ken of the military commanders of both sides.

Military men are usually reluctant to withdraw to tactically disadvantageous positions. But the need now is to give and take. This therefore calls for mediation between the two militaries, and that is best done by a trusted third country’s military.

A neutral military mediator can understand the tactical security concerns of either side and can help in determining the optimal under the circumstances.

The three countries have invested big in the RIC and it is now time to make it pay. The stakes are big. Even a limited Sino-Indian war will mean the end of the RIC and its promise of a multipolar world.

Russia is uniquely placed to play the role of a neutral mediator to help the two countries find an agreement on a single LAC. It enjoys a good measure of trust in both countries. One hopes that both countries will find the good sense to accept mediation