The Queen was seen as a matriarch trying to keep a large, dysfunctional family together. Much like matriarchs of joint families here 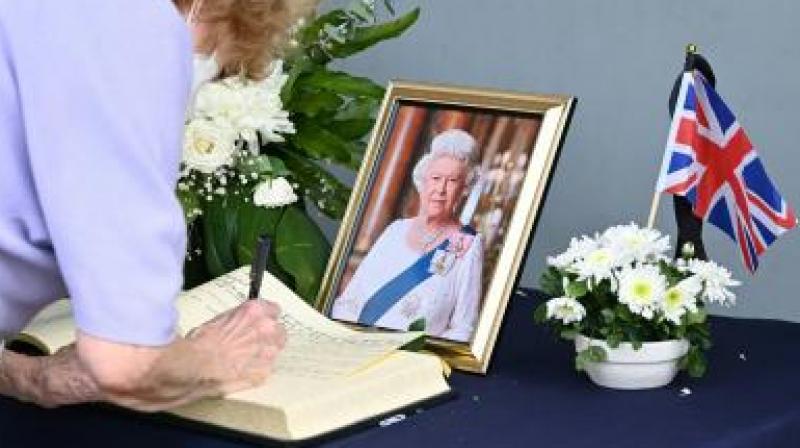 A woman signs the condolence book at the British embassy in Manila on September 12, 2022. (Photo: AFP)

How I miss Khushwant Singh when a famous person passes away! Had Khushwant Singh been alive, he would have penned the most sizzling obituary of Britain’s longest-serving Rani, Queen Elizabeth II, who died on September 8 at the age of 96. Much has been written in our media, but nobody can match KS’s trenchant style.

“How has India responded to the news of the Queen passing away?” The voice on the phone was clear and clipped. It was a lady from the BBC World Service. I was in a rickety car driving up to Ooty, with a driver who was talking on the phone and not wearing his seat belt. I would have worn mine had it been there! The three-hour drive on NH-181 from Coimbatore airport to Ooty (86 km away), up the steep Coonoor ghat with 48 hairpin bends, is hair-raising, with stray bison and baby elephants halting the traffic. It was too vast a question to respond to given the circumstances. I replied honestly, and perhaps a bit too bluntly, by telling the lady:“Well… we do have several other major concerns to deal with, besides, we also have mixed feelings about the Queen, given the love-hate relationship with your nation.” There was a brief pause. She continued:“I understand you have met King Charles and the Queen Consort…” Indeed, I had. “What are your views on our new King?” The car I was in had narrowly missed a family of langurs, and the driver had only one hand on the wheel. I gulped. And quickly said:“He is a wacko, an eccentric with strange political views… besides, the world has moved on. His job description has also changed over time…” The lady reminded me that their country was in mourning and the mood was somber across Britain. I softened my views and added: “The Queen was seen as a matriarch trying her best to keep a large, dysfunctional family together. Much like matriarchs of joint families here. She reminded me of the key protagonist in an Ekta Kapoor saas-bahu saga — a naani and a daadi stuck in a thankless job. In India, we place great value on family, tradition, and emotional ties that bind generations. We are sentimental and forgiving, when a family elder passes away…” There was a long “Hmmmm”. By now the driver had started an animated conversation with his wife. But I wasn’t done:“The young in India remain largely indifferent to British royalty. They have heard of the Queen, thanks to OTT platforms, and the success of The Crown. They are definitely more interested in gossipy tidbits about Meghan and Harry, and will probably tune in to see what Meghan wears to the funeral. She’s perceived as a wrecker of the family… and therefore a vamp.” The lady then asked a rather surprising question: Does race and caste figure in the way the Queen’s passing has been underplayed in India?” Huh?

I watched the gun carriage as the Queen’s cortege made its way toWestminster Hall. All that pomp and pageantry seemed so out of sync with today. A made-for-television spectacle, starched, rigid and cold. We are accustomed to rona-dhona and emotional displays of grief. There were far too many stiff upper lips around on TV, and the solemnity seemed forced. All those absurd rules! The protocol! Who gets to wear the military uniform and who doesn’t… A revered lady is dead. Her children and grandchildren being sifted and divided up for public display appears cruel and humiliating to me. Then there were those distasteful questions about whether or not Meghan the American Witch had come with hidden microphones under her fitted black dress during the staged walkabout.

I am neither a hater nor a baiter. Reading all the outpouring of anti-British feelings in India right now, I am frankly pretty bored. Someone wants an apology, someone else wants the Kohinoor. Yes, India was plundered and looted by the Brits… but look at the tatters the Empire is in today. And look at us! Look ahead… Not back. I doubt King Charles III will be able to keep the monarchy on track, or even whether he will be accepted as a worthy successor to his mother, given the changed public sentiments. I am against this business of coercing apologies out of public figures for past sins of omission and commission. These forced “sorrys” are pretty meaningless and fake. History cannot be reversed, so why go down that path? The evil that men do lives after them…etc, etc. There is enough evil all around us right now in our own backyard — why not focus on the present day and look after our own, instead of going back in time and demanding apologies left and right?

The Queen had shrewdly adhered to the priceless advice (“Never explain, never complain”) given to her ancestor, Queen Victoria, by her astute adviser and Prime Minister, Benjamin Disraeli, the first Earl of Beaconsfield, in the late 1800s. Significantly, Disraeli is the only Prime Minister of Jewish origin and a novelist who continued to publish his work even after he became Prime Minister. It is a motto which, royal watchers say, was adopted by Queen Elizabeth’s mother (the universally beloved Queen Mum, who died aged 101, in 2002) and subsequently by Queen Elizabeth II herself. I’d say it’s a fabulous mantra to follow even without being the Queen of England. The more you explain, the worse it gets. Silence has more power than confessions and admissions. Where has opening the gab benefited anyone? Look at Prince Harry’s “haalat”. Worse, see Prince Andrew (popularly known as “Randy Andy”, for obvious reasons) marching in tailcoats — resembling a royal butler — behind his mother’s gun carriage, and cutting such a pathetic figure.

The state funeral on Monday will undoubtedly attract a record number of eyeballs worldwide. We will be represented by our President, Droupadi Murmu — an apt choice. But before that, we will be treated to our Prime Minister Narendra Modi’s birthday celebrations on Saturday,when he turns 72, which will go on for a fortnight and end on Mahatma Gandhi’s birth anniversary (October 2). Remember folks, it’s “Sewa Pakhwara” time. Follow the leader: Gird your loins and toil away. Janam Din Mubarak, Modiji! Glad you also follow half of Disraeli’s anmol advice by never explaining.