In the next many days, on any day of his choosing, Mr Modi should just walk into a protest site and spend several hours 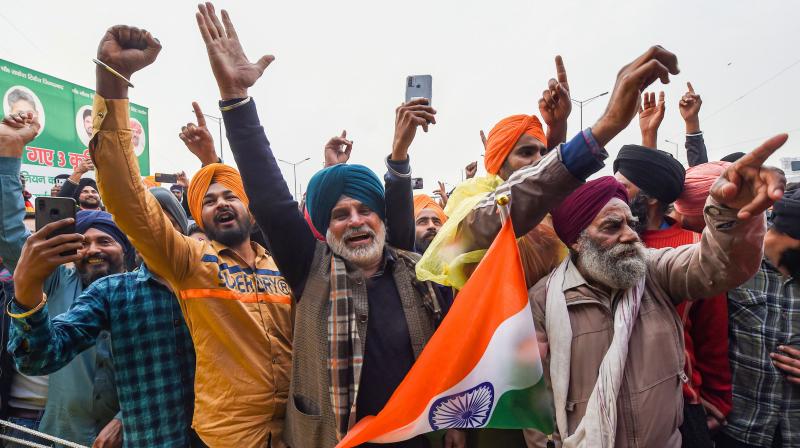 The protests are no longer primarily about fears around the potential reduction or doing away with minimum support prices, or ending of the mandi system, it is now about hurt farmers set against the hubris of the government. (PTI file photo)

A political stalemate deadlocked in a seeming binary is dangerous. It is erroneous, an optical illusion, which often arises out of a bankruptcy of ideas premised in possibilities, leaves both sides strongly entrenched in a zero-sum game. The binary has left its predictable trail of bitterness on both sides of the current battlelines.

Hail George W. Bush, the modern proponent of the equation: You are with us or against us! But this is actually from a more ancient playbook.

It was the general-aristocrat from Athens who would famously terrorise opponents and convert every debate into a seesaw for testing loyalties as he would thunder: Whose side are you one? Cleon, clearly, in 430 BC, was ready for Twitter trolling.

You are either with the farmers, a monolith, with one voice and demand, or with the government — says the modern commandment — no debate  or amendment. This law limiting our positions and possibilities for a resolution to a mere binary isn’t going away.

What follows is stereotyped playing the player, not the ball. You are a Khalistani anarchist, anti-Indian, out to destroy India’s sovereignty at the behest of a neo-international cabal or a puppet of a fascist Hindutva government, out to pledge the farmers’ destiny to a corporate crony club.

Even Arundhati Roy, who famously opposed Mr Bush’s binary of having to choose between a “malevolent mullah or a mad Mickey Mouse” in the war against terror early in the new millennium, sees no third option now.

There are several hostages to the etched in stone binary: the first is truth. The second is India’s farmers’ future. The third is the start of a resolution and solution, which can never be ours unless we set aside the mistaken notion that in the pitched battle on Delhi’s borders, only one of the two — protesting farmers or the Narendra Modi government — can win. One must step down, after defeat, to ensure the other side wins.

But there is another possibility — the farmers can ensure Mr Modi wins, and the PM can strive to make the protesting farmers triumph — without either side having to make a moral compromise.

Let’s begin with the position of common belief, since we lost sight of it: there is an accumulating agrarian crisis in India, marked by smaller landholdings, an unabatingly steep agflation (inflation of agri inputs like the price of seeds, fertilisers, urea, pesticides), transmission losses and unviable costs of financing (most farmers don’t get bank loans, private money rates are backbreaking), self-defeating subsidies (loan waivers not applicable to most small farmers and landless tenant farmers), the impact of climate change in a largely rain-fed agri-sector, and unviable farmers (even rich farmers don’t have cash to pay for health, education).

With the acknowledgment of a common problem comes an alignment of purpose — to solve the problem, reducing farmers’ costs, reducing overall costs of production, eliminating waste, and increasing farmer incomes without making food too expensive for a nation of over 1.3 billion.

Enough commentary has flowed through editorials, columns, feisty television debates and vituperous social media exchanges about the transformed nature of the agitation. Not just Sikhs from Punjab but Jats, predominantly BJP voters and building blocks of Hindutva, are now resolved to stay put on the ground till the bills are withdrawn.

After Republic Day and the tearful breakdown of Rakesh Tikait, the bills have been reduced to a backdrop, an excuse. The protests are no longer primarily about fears around the potential reduction or doing away with minimum support prices (MSPs), or ending of the mandi system, or the visceral paranoia around corporates getting legal backing to do contract farming or store grain — it is now about hurt farmers set against the hubris of the government.

If the farmers were not emotionally hurt, their pride not invested in staying put on the ground, they would have been convinced by Narendra Modi’s defence in Parliament of the three bills. Mr Modi has put the cart ahead of the horse in trying to logically convince people who are plain angry and see the government as arrogant. The resolution can only begin by appealing to the hearts of the Jat farmer protesters with an act to show that the government is not arrogant.

In the next many days, on any day and at any hour of his choosing, Mr Modi should just walk into a protest site and spend several hours. Let him make some rotis at the langar, let him listen and to the ladies cutting vegetables, sit on the ground with the leaders as they pass the hookah. Ask them if they are comfortable, if they have everything they need for now. Let him break bread with them, the ice will break on its own.

Yes, that’s all it might end up taking to end these protests. Just that. Mr Modi is capable of magic with some sections of people and the protesting Jat and Sikh farmers are part of that section. Once they are no longer angry, and his humble arrival at the protest site will convince them that neither he nor his government is actually arrogant, the stalemate will lead to a thaw.

It is then that Mr Modi can explain that the existing policies have failed the farmer for 50 years and expecting a different result with the same policies would be an Einsteinian measure of insanity. The BJP can talk about how corporate and cooperative procurement of milk have enriched farmers in the dairy sector; and how this policy wishes to replicate the same success for grain.

Prime Minister Modi in their midst will be a visual story for all farmers, the soothing touch needed, the surgical strike on their hearts. It will calm farmers in all protest sites and those elsewhere simmering with anger with a new belief in his leadership, and that his government cares for farmers everywhere. Before he leaves the protest site, having told the world he was there himself, he can throw in a final gesture of affection by asking for some jalebis and rotis to be packed for his dinner — the entire gamut of security and Covid-19 precautions set aside — and he will leave with their hearts.

A little haggling, a little willingness to give in on an odd thing here or there; and the farmers will be happy to leave, with the optics of victory, their pride intact, and return home, their heads held high.