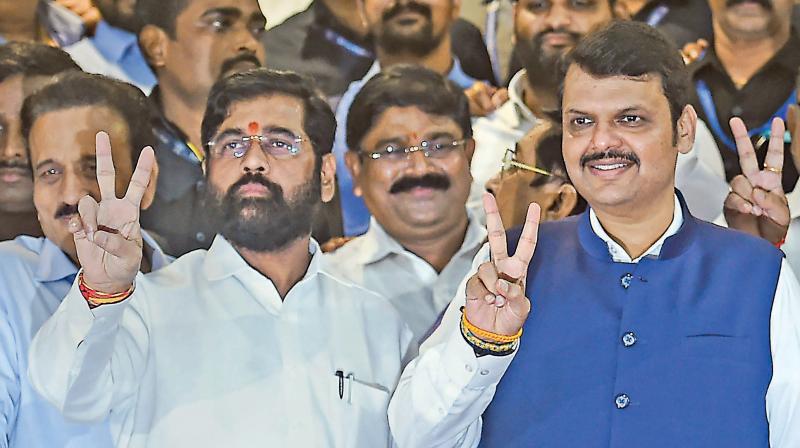 A great American President had once said that “in politics, nothing happens by accident… If it happens, you can bet it was planned that way”. What happened in Maharashtra recently was a well-scripted move to further the ruling party’s footprint. Also, state leaders should learn the lesson that the high command is supreme and they must play second fiddle when required to do so.

Former CM Devendra Fadnavis, who was “demoted” to deputy CM, is in good company. In neighbouring Gujarat, home turf of Prime Minister Narendra Modi and Union home minister Amit Shah, where Assembly polls are due by the yearend, a similar demotion occurred last year.

Deputy CM Nitin Patel, the senior-most of the Patels in the BJP’s “Hindutva laboratory”, who was raring to be CM, was summarily “demoted”. Nitinbhai, as he’s known throughout Gujarat, was left high and dry. The PM not only changed the CM but dropped the entire Cabinet, so Nitinbhai remained an MLA, in an almost double demotion. The PM may have got the idea from an electrical firm’s advertisement two decades back!

It was double whammy for Nitinbhai: five years ago he was almost set to become CM, replacing Anandiben Patel, and had even distributed sweets to celebrate. Suddenly Vijay Rupani, known as close to Amit Shah, was made CM, which also left Anandiben fuming.

Five years later the high and mighty in Vijay Rupani’s government were dropped like a hot potato and only first-term MLAs were made ministers, including the chief minister. Amid charges that the Covid-19 pandemic wasn’t handled well, Mr Rupani resigned without giving any reason and said he was among the loyal soldiers of the party who were assigned different roles by the organisation from time to time.

Till then, no one had heard Bhupendra Patel’s name outside Gujarat, but he was suddenly made CM. How can a first-term MLA be well known outside the state? There’s a tale behind Bhupendra Patel’s appointment: he was the MLA from the constituency long represented by Anandiben. Some say it was sweet revenge by Ananidben over Amit Shah. That the two leaders don’t get along well is an open secret in Gujarat’s politics.

As of now, it seems that Mr Modi’s gamble is paying off as there appears no serious threat to the BJP in Gujarat despite being in power for more than two decades in the state. Tomorrow, of course, is another day.

If one intently pursues the Modi-Shah style of politics within the BJP, one thing is always clear: they go all out to cut established players to size. B.S. Yediyurappa was instrumental in bringing BJP to power in Karnataka, hailed by the party as the BJP’s gateway to the South. The Modi-Shah duo tolerated Mr Yediyurappa for a while till the government stabilised but ensured he quit without making too much noise.

Basavraj Bommai, who replaced him, is a relative newcomer to the BJP.

As chief minister, Madhya Pradesh’s Shivraj Singh Chouhan is Mr Modi’s contemporary. He was once hailed as “PM material” by L.K. Advani. He might be Madhya Pradesh CM now but he is a changed man. There was no immediate alternative for the BJP high command to ensure a smooth transition when Kamal Nath’s government collapsed in early 2020 after Jyotiraditya Scindia’s rebellion. Now Mr Chouhan misses no opportunity to praise the Prime Minister. It looks as if he wants to complete the term and appears resigned to the fact that he may not be at the helm after next year’s Assembly polls even if the BJP returns to power. ED raids on a prominent businessman close to him a while back were a matter of much debate within political circles in the state.

In Maharashtra, Mr Fadnavis’ “demotion” has not only stunned the BJP in the state and its allies but also surprised the former CM’s detractors. Mr Fadnavis, arguably one of the tallest BJP leaders in Maharashtra, had become the party’s “face” after being at the helm from 2014 to 2019.

What could be worrisome for Mr Fadnavis in Maharashtra in the short as well as the long run is the direct access Eknath Shinde, the new CM, has with the Modi-Shah duo, amid signals that the rebel Shiv Sena leader had known much before Mr Fadnavis that he was to be sworn in as CM. This could change the equations in the state BJP and those critical of Mr Fadnavis may try reassert themselves after being left in the cold for long.

If Mr Shinde succeeds in marginalising Uddhav Thackeray’s Shiv Sena,  then Mr Fadnavis’ utility in the state for the BJP high command would be less. In such a scenario, the young leader could be called to New Delhi and become a Cabinet colleague of Nitin Gadkari, a dreaded prospect for Mr Fadnavis, once seen as one of the BJP’s emerging stars along with leaders like Yogi Aditynath.

New signals from the BJP high command on Maharashtra will be visible soon when the Eknath Shinde Cabinet is expanded. “Who gets what” will indicate the shape of things to come. The choice of young and ambitious Rahul Narvekar, a newcomer to the BJP and an Assembly first-termer, as the new Speaker says a lot.

There’s no doubt that the state BJP unit’s unity will be put to test with the application of the “Gujarat model” in Maharashtra. If there are more such shocks from New Delhi, it could lead to some rejoicing in the badly bruised Opposition camp.