Modi and Kovind offer a glimpse of ‘New India’

President Kovind has no election to fight in the near future, and he was therefore free to express the Sangh Parivar’s true objectives. 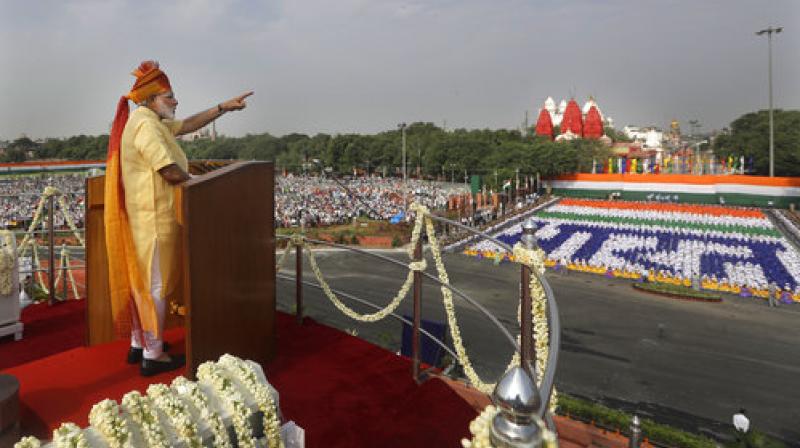 Indian Prime Minister Narendra Modi addresses the nation on the country's Independence Day from the ramparts of the historical Red Fort in New Delhi. (Photo: AP)

Two landmark speeches over two days by the President and the Prime Minister were a study in contrast. In reversed roles, while Mr Ram Nath Kovind, in his first Independence Day-eve speech, took a partisan path by hawking the virtues of the Sangh Parivar founders’ strain of “integral humanist quotient”, Mr Narendra Modi tried to take the high road by condemning cow vigilantes and suggesting, contrary to his party’s dogma, that the Kashmir problem could not be resolved by force alone.

Whether anything will change on the ground remains to be seen, but after three years in power Mr Modi’s thoughts seem to be guided by the 2019 general election, and he took the safe target of the 75th Independence anniversary in 2022 to make new promises. There were interesting nuances in the Prime Minister’s three-year record of rule that left many promises remaining unfulfilled.

The most glaring, of course, is the promise to create millions of new jobs. In an attempt to get over his embarrassment, he talked of job creators. And he devoted considerable time to justifying the demonetisation decision which most economists have panned as foolish, despite his ability to persuade the poor that it was an anti-rich move. Even President Kovind was brought in to defend the demonetisation move.

The PM for the first time also publicly expressed sympathy for the parents who had lost their children by the dozens in the Gorakhpur hospital tragedy, but he had no remedy to offer. Above all, the tragedy symbolised the dysfunctional state of government hospitals in Uttar Pradesh and elsewhere, thanks to sharp budget cuts made in health and education in Mr Modi’s priorities. With the BJP’s eyes fixed on 2019, no major reform is contemplated. Mr Modi was on firmer ground in singing the virtues of the Goods and Services Tax (GST), despite the hiccups. It was a bold move that makes sense for the country’s future development. On the other hand, Mr Modi did not mention China or Pakistan in his address, presumably because the standoff with Beijing in the Himalayas continues, and any mention of Islamabad would invite a riposte.

Interestingly, unlike in his inaugural speech omitting Jawaharlal Nehru, President Kovind did mention the towering first Prime Minister of India as an also-ran in the following words recalling the role of “countless freedom fighters who made great sacrifices… men and women who represented all parts of our country and a variety of social and political thought”, naming among others Mahatma Gandhi and Jawaharlal Nehru.

Both President Kovind and Mr Modi talked about the “new India”. The accent was obviously on nailing down the votes of dailts and other backward communities, although the former dealt at length on “a compassionate and egalitarian society that does not discriminate on gender or religious background in a New India, which must include that integral humanist component that is our DNA”.

Taken together, the two speeches are an outline of what the BJP government intends to achieve: the building of a Hindu India guided by large doses of nationalism wrapped in saffron colours, in the President’s case more explicitly. Mr Modi has made few other promises on the remaining two years of his term. Even on Kashmir, there are no new markers and the arrest of BJP supporters in Kashmir on Independence-eve is one example of the contradictions involved.

Mr Modi chose not to spell out his government’s policy on farmers’ plight as their mounting agitations increasingly leading to suicides was sought to be tackled in the short run by loan waivers without an attempt to frame a policy on circumventing of mounting debts. Indeed, the impression one gained from Mr Modi’s Red Fort speech was his objective not to rock his government’s boat at a time the Opposition was in disarray, with the BJP having demolished the “grand coalition” in Bihar by capturing the allegiance of Mr Nitish Kumar, often touted as the combined Opposition candidate in 2019.

President Kovind has no election to fight in the near future, and he was therefore free to express the Sangh Parivar’s true objectives. Ironically, RSS leader Mohan Bhagwat was prohibited from unfurling the national flag in Marxist-ruled Kerala. He, however, went ahead and hoisted the flag defying the district administration’s order.

Granted that politics is the art of the possible, Mr Modi is discovering that this time around his histrionic abilities did not match the message he had to deliver. It was one of caution and staying the path without any new stirring themes to work on. If there was a measure of disappointment among many, it was muted.

The question that President Kovind’s performance raises is whether he has compromised his new role as President by reading from an RSS-inspired script. Despite his disavowal of party loyalties, he seems unable to grasp his being head of state of a diverse multi-ethnic and multi-religious country. The new vice-president, M. Venkiah Naidu, has already take issue with his predecessor, Hamid Ansari, for suggesting that Muslims felt insecure in the new India that is being built.

It was an unbecoming intervention. Will it serve as a warning sign for the new President? Speculation in political circles is that he will do as he is told to do by the BJP government. In the end, it would boil down to Mr Modi’s ability to retain a measure of autonomy from the RSS over the pace of the Hinduising of India.

In any event, the two speeches, taken together, give us a sense of what to expect in the new configuration of both the President and Prime Minister having their roots in the Sangh Parivar. The question that remains unclear is the extent to which the government plans to use the presidency as a bully pulpit to spread its message of Hindutva.