Opinion   Columnists  16 Aug 2022  Sunanda K. Datta-Ray | Ukraine is a better fit for EU than Britain ever was
Opinion, Columnists

Unlike Britain, Ukraine, which feels that it has paid in blood for membership, sees Europe as its political and cultural home 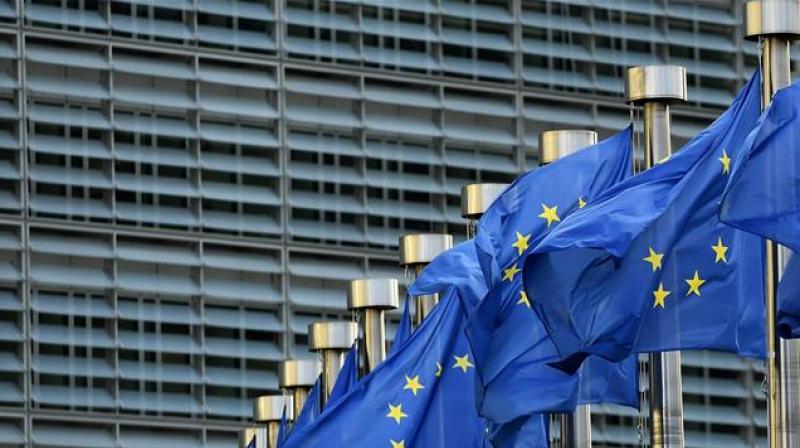 European Union flags are seen in front of the European Commission building in Brussels. (AFP)

A leading Danish politician used to say that thanks to its Indian experience, Britain was too colonially cosmopolitan to be comfortable as a part of Europe. Ukraine, in contrast, has no international dimension to speak of, so that the replacement of one by the other in the European Union might make for greater clarity in the emerging world order.

Of course, it is not certain that the EU will find that Ukrainian President Volodymyr Zelenskyy’s beleaguered government meets all the conditions for membership that the European Council stipulated in 1993. But unlike Britain, Ukraine, which feels that it has paid in blood for membership, sees Europe as its political and cultural home. Russia’s brutal invasion has only strengthened that conviction. Even if their survival owes much to British and American military assistance, Ukrainians know they have more in common with their EU neighbours than with Britain or the United States.

Ukraine is therefore likely to play a much more active role in deepening the integration that the British saw as the Brussels bureaucracy’s stranglehold. Supported by former Warsaw Pact members like Poland and being dependent on agriculture and manufacturing, Ukraine presents a contrast to Britain’s economy. It might help to change not just the EU’s character and composition but also its relations with the other major players, notably the United States, China and Russia, as European governments and the US look for fresh alliances for an uncertain future.

China, too, is planning for the future. The furore over the visit to Taiwan by US House of Representatives Speaker Nancy Pelosi is a reminder that the military power of a rising China willing to use force to further its global ambitions cannot be ignored. The fireworks also warned that the US and China are competing for spheres of influence all over the world, while the controversy over the dual-purpose Chinese naval research vessel, Yuan Wang 5, docking at Sri Lanka’s Hambantota Port reminds us that China is embroiled in other rivalries as well.

What is not clear is how far the US is prepared to go in opposing Chinese assertiveness. The first in several military showdowns over Taiwan was in January 1950, three months after the Communist victory in China’s civil war, when President Harry Truman declared that the United States would not intervene militarily to help the defeated Kuomintang forces which had fled to Taiwan.

Mao Zedong, who was already preparing an invasion, probably desisted only because the Korean war erupted that year, prompting Truman to change tack, backing South Korea and ordering the Seventh Fleet to defend Taiwan. Four years later, when Chinese forces attacked some of Taiwan’s outlying islands, American officials threatened nuclear strikes to force Mao to back down again.

All this changed in February 1972 when President Richard Nixon’s seven-day visit to China with Henry Kissinger and their meetings with Mao and Zhou Enlai made history. But it was not any statesmanlike instinct that produced that dramatic outcome. Far from being inspired by any lofty concern for global harmony or posterity’s welfare, they sought only to isolate and neutralise America’s sole -- and then formidable -- rival on the world stage. The Soviet Union also happened to be the mentor that China had outgrown and intensely resented.

It’s a moot point whether similar steps will now be taken again for less selfish and more humanitarian reasons. The Covid-19 pandemic demonstrated with tragic vividness that only a collective effort can ensure man’s survival.

That inter-dependence is even more vital when it comes to controlling carbon emissions, sharing resources, regulating markets or addressing the many challenges that obstruct sustainable growth. The nation-state is a convenient political and administrative entity; but it is not always the optimal unit for economic growth. South Asians have forgotten, for instance, that India, Pakistan and Bangladesh comprise a single whole in matters like water management. Nor would Britain have exulted in Brexit if parochial concerns had not taken precedence over greater transnational needs. Now, it seems that Europe, struggling to rise above the limitations of the Westphalian legacy of nation states, might become a playground for American and Chinese ambitions.

The US-China honeymoon soured years ago as Beijing’s military might appeared to threaten US global supremacy. The Taiwan Relations Act of 1979 was a first warning since Washington severed diplomatic ties with Taipei in 1972. Then came President Donald Trump’s 2018 Taiwan Travel Act and visits to the island by high US state and commerce department officials.

Geography and history having endowed Europe with different interests in Asia, China may be seen as a partner for cooperation, economic competitor, or even as a systemic rival, but not quite an enemy. Some anxieties about Chinese investment have not been allowed to prevent substantial inroads into property, infrastructure and public utilities. Europeans also know they must live with Russia: it is not for them the bogey against whom the North Atlantic Treaty Organisation was created to, in the words of the first secretary-general, “keep the Soviet Union out, the Americans in, and the Germans down”. North Africa and West Asia have also engaged Europe for centuries.

Europeans with this heritage may not enthusiastically support the US in economic and military strategies to contain China. They look askance at the Quad and its nuclear-armed inner core, Aukus, which is designed to reduce the scope for Chinese operations in the Indo-Pacific region. They feel that even the US can gain more by befriending than obstructing China.

modernising People’s Liberation Army and American forces could be devastating.

Other surveys show that without cheap Chinese shoes, ready-mades, plastics, electronics and other household goods, American living costs would go up substantially, with horrendous effects on all other costs.

With its multiple domestic problems, falling household income, trade deficit with the EU, overstretched health service and high public deficit, Britain’s exit may not be a great loss for Europe. The loss is more in quality.

Nor may Ukraine’s membership compensate in material terms. But at least it will not lead the EU into one military adventure after another in the wake of a United States that simply cannot stop invading Asian countries.