China proclaims the utility of Brics to forge cooperation among the emerging economies as the world undergoes a “new industrial revolution”. 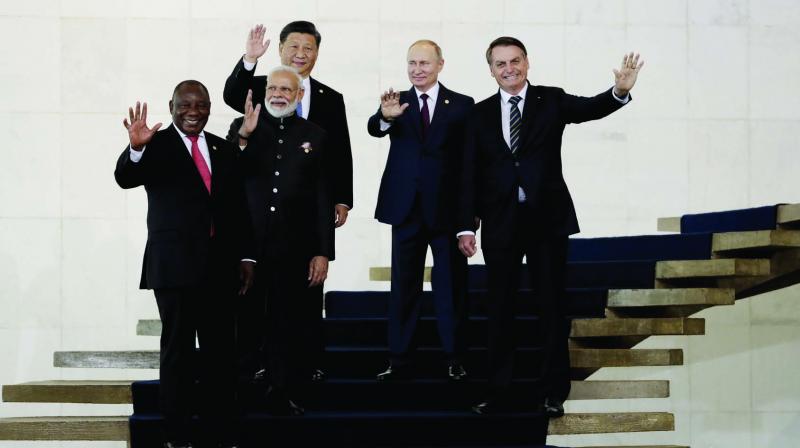 Prime Minister Narendra Modi attending the 11th Brics summit in Brasilia, the Brazilian capital, on November 13-14 left most ordinary Indians foxed, and Delhi’s residents irate over a silent and missing leader as they were asphyxiating under a cloud of smog. This group initially comprised four emerging economic powers — Brazil, China, India and Russia — as originally envisioned by Jim O’Neill of Goldman Sachs in 2001 as the four most likely to influence the geo-economics of the early 21st century. South Africa was added, mostly at China’s insistence, in 2011, turning “Bric” into “Brics”. However, in recent years, Jim O’Neill and others like S&P Global Ratings have noted that the group has lost relevance over the diverging long-term growth trajectories of its members. The latest summit has to be viewed against this background.

India’s external affairs minister Subrahmanyam Jaishankar, delivering the Ramnath Goenka Memorial Lecture in New Delhi as Mr Modi attended the summit, expounding on the Modi government’s arch-realistic foreign policy of multi-alignment, said India sought to “fashion Brics into a major forum”. But his remark ignores that the orientation and internal dynamics of the five members has not remained a constant since its founding. South Africa has still not recovered from the decade-long misrule of former President Jacob Zuma, which ended with his recall in early 2018. Its GDP growth slowed from 1.3 per cent in 2017 to an estimated 0.7 per cent in 2018. It is expected to rise to 1.5 per cent this year. Part of the problem has been the slowdown of the Chinese economy and the resultant effect on both South Africa and Brazil as nations dependent on exporting commodities. Brazil saw the jailing of former President Luiz Inacio Lula da Silva, whose socialistic politics and presidency (2003-2010) saw Brazil’s active participation in the creation and nursing of Brics. Brazil also joined India, Japan and Germany in another group called G-4 to seek reform of the UN Security Council and the inclusion of these four nations as permanent members. The election of Jair Bolsonaro, a former middle-level military officer, has swung Brazilian foreign policy and domestic discourse way to the right. US President Donald Trump is the role model for Mr Bolsonaro. He even talked of a military base for the United States, which ironically, in a nation which saw decades of military rule, was overruled by the Brazilian military. In a role reversal, the diplomats and the Brazilian military are trying to contain the over-enthusiasm of their President for seeking almost an alliance with the US. Inviting Mr Bolsonaro as chief guest at next year’s Republic Day would not send a great signal to the other nations in Latin America that are wrestling with anti-democratic forces. Alberto Fernandez, the newly-elected Peronist President of Argentina, a nation that considers itself, besides Mexico, as Brazil’s rival in South America, was not even congratulated by Mr Bolsonaro.

The Chinese media has quoted Wang Yi, its state councillor, as saying that they see Brics as a “stabiliser”, necessary to promote multilateralism and safeguard the international system with the UN at its core. But within the group these terms mean different things to different members. China and Russia, as permanent members of UN Security Council, feel no necessity to admit new permanent members. Brazil and India balanced them in the original Bric, as two members seeking UNSC expansion and reform. The addition of South Africa brought the hope that as aspirant for a permanent seat from Africa, the voice of reformers would gain ascendancy, but it never joined the G-4, fearing loss of support in Africa. But 10 years of the Zuma presidency put paid to its ambitions as South Africa degraded both economically and institutionally.

In fact, the strategic convergence between Russia and China has strengthened their ability to shape the Brics agenda, particularly with Russia assuming the chairmanship in 2020. Both see Brics as a platform for containing US hegemony and unilateralism. China proclaims the utility of Brics to forge cooperation among the emerging economies as the world undergoes a “new industrial revolution”. China rallies support, in the name of all, to counter pressure from protectionism, unilateralism and de-globalisation. But India has refused to join the Regional Comprehensive Economic Partnership (RCEP), which includes the 10 Asean nations plus Japan, South Korea, China, Australia and New Zealand. Mr Jaishankar calls it “living with contradictions”. Others may well see it as opportunism and lack of reliability.

As is normal, the hype put out by the Indian government prior to the visit was that Mr Modi had terrorism on top of his agenda. The declared theme of the summit was “Economic Growth for an Innovative Future”. Brazil and South Africa have little to do with countering terrorism in South Asia. China pays lip service to India’s complaints as it sees India-Pakistan differences entirely through the latter’s eyes. Russia is happy to play all sides as it advances its role and influence in West Asia, Central Asia and the AfPak region. China is also bandying with the idea of Brics-plus. It does not necessarily mean expansion, but closer engagement with the next tier of emerging economies — like Turkey, Indonesia, Argentina, Mexico, etc. India’s relations with the first over Kashmir and of Brazil with the last two are testy over disparate ideological pulls, particularly after the rise of Mr Bolsonaro.

Thus, while on paper the five nations may constitute 42 per cent of the world’s population, 23 per cent of its GDP, 30 per cent of its land and 18 per cent of global trade, they are not tuned to a comprehensive common vision. What is more, over time their growth, aspirations and visions have fractured further. As some joked after the South African economic meltdown, there were loose bricks in the Brics wall. New Delhi will have to take a call that, as Mr Jaishankar posited, old dogmas cannot be allowed to become shackles. Nor, it can be argued, should new ones. If India’s economic woes do not reverse quickly, the patience of the Indian people with the Prime Minister rushing off to repeated meetings with literally the same set of important leaders will start getting questioned. In diplomacy too, there is a law of diminishing returns. The Narendra Modi government may have reached that point.