Anita Katyal | Why Shah held back in Bihar; hunt for unhappy Trinamul men 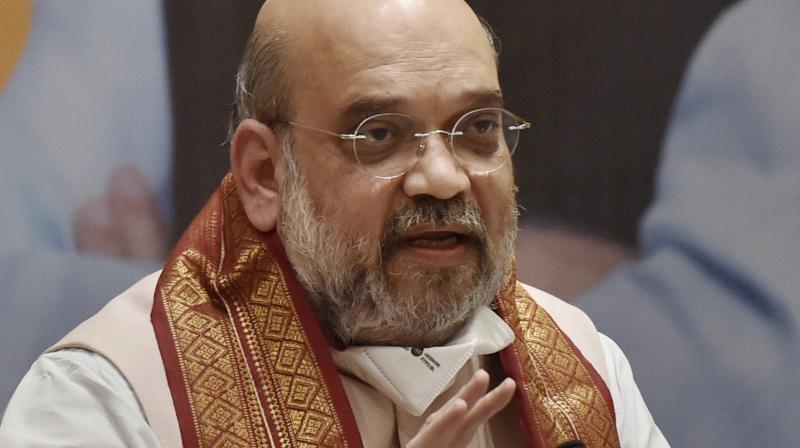 When home minister Amit Shah tested positive for the coronavirus and was hospitalised twice, it was generally accepted that the BJP’s chief election strategist would not be joining the poll campaign in Bihar because of medical reasons. But Mr Shah’s recent two-day visit to West Bengal immediately set tongues wagging as people wondered that if Mr Shah had recovered sufficiently, why didn’t he make it for the last phase of the campaign in neighbouring Bihar? While it is true that Mr Shah kept away from Bihar on doctor’s orders, the home minister was also not happy with the fact that he would be constrained from propagating his hard Hindutva line in his speeches. The BJP had decided that it would play down the communal card in Bihar as identity politics usually takes precedence here. Since the home minister and Hindutva are inseparable, it would have been difficult for Mr Shah to contain himself and speak about issues that do not have a dash of minority-bashing or Hindu nationalism. Though Yogi Adityanath did do his bit, he was promptly put down by Nitish Kumar.

Is the Madhya Pradesh government’s women and child department jinxed? How else can one explain why the incumbent minister, Imarti Devi, previously with the Congress and now with the BJP, was unable to hold her seat in the recently-concluded byelections. According to the grapevine in Bhopal, ministers who have headed this department have invariably failed to stage a comeback. The previous minister Maya Singh did not get a ticket in the last Assembly poll while an earlier minister Ranjana Baghel had also failed to make the grade. It was widely expected that Imarti Devi would come through with flying colours. Not only is she Jyotiraditya Scindia’s camp follower but she was also in the news in the run-up to the election when former chief minister Kamal Nath used derogatory language and referred to her as an “item”. The BJP had launched an offensive against Kamal Nath for insulting a woman and had approached the Election Commission that withdrew the Congress leader’s star campaigner status. But despite these efforts and the publicity, Imarti Devi was unable to break the jinx.

Prime Minister Narendra Modi’s emphatic declaration that Janata Dal (United) leader Nitish Kumar will remain Bihar chief minister has not gone down well with a section in the BJP that feels the top post rightfully belongs to their party since it has a higher tally in the Assembly. In fact, even before the election, the BJP’s Bihar unit had been urging its Central leadership to stake claim to the chief minister’s post since it has emerged as the dominant force in Bihar. However, Mr Modi is not pressing his party’s claim as it would not like to give Nitish Kumar a reason to switch over to the other side. The BJP has decided it is better to forgo the chief’s minister’s post rather than risk losing yet another ally. As it is, there is talk that regional parties, which are making tentative moves to form a joint front, would approach Nitish Kumar to join them and if he was at a loose end, the JD(U) could even be propped up as its prime ministerial candidate.

Now that Bihar is in the bag, the BJP has shifted focus to West Bengal, which goes to polls next year. Keen to expand its footprint in the East, the BJP is eyeing disgruntled leaders and workers of the Trinamul Congress, which can be persuaded to join the saffron party. West Bengal chief minister Mamata Banerjee has reason to worry as the BJP is determined to dethrone her and will not stop at anything in its mission. It has deployed her former colleague Mukul Roy to identify the unhappy leaders in the Trinamul. In addition, the BJP plans to take a hard look at Trinamul leaders whose names figure in cases of financial impropriety. It will not be surprising if these cases are suddenly activated in the coming months, only to disappear miraculously once the person concerned crosses over to the BJP.

Former Madhya Pradesh chief minister Kamal Nath faces an uncertain future after he failed to stop the BJP from picking up a substantial number of seats in the state byelections. Mr Nath currently holds two posts — he is leader of the Congress legislature party and the state unit president. With Congress insiders blaming Mr Nath for the party’s poor performance, there is a growing demand that the party follow the principle of “one man, one post” and replace Mr Nath as state unit president. Mr Nath would ideally like to return to Delhi as he is used to playing on a larger stage but there is no role for him here. He may well be forced to stay on in Madhya Pradesh and focus on grooming his son, a first time MP from Chhindwara.