Vaccine passports will prevent travel by people from countries that will not get vaccines for months, or even years 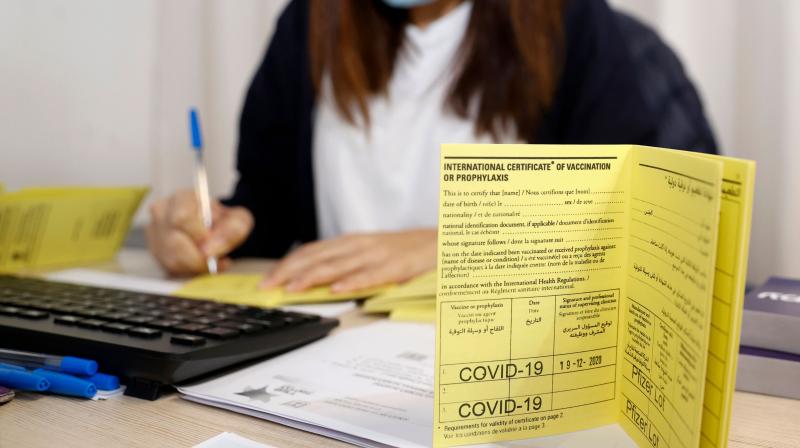 Human rights groups call this a form of discrimination in favour of the wealthy. There is also the ethical question of those who for one reason or another refuse to be vaccinated. (Photo: AFP)

Stranded in London because of the Covid-19 pandemic-related travel restrictions, I cannot but welcome any innovation that might facilitate my return to India. But having grown up in Kolkata, I am also acutely aware of the self-defeating flaw from which the proposal for what are called “vaccine passports” suffers.

Even in the 1960s an Indian going abroad had to be armed with a little booklet certifying that he or she had been vaccinated against yellow fever and (I think) the plague. No traveller from Kolkata that I knew of ever suffered the needle -- a small payment, perhaps ten or fifteen rupees, to the travel agent produced the booklet with a convincing array of official-looking seals.

Kolkata cannot have been unique among Indian cities. In fact, an American diplomat once told me that no matter what ingenious devices were introduced by the state department in US visas, Indian forgers were always a step ahead. No one recommends illegal travel, but as the floods of refugees from West Asia and across the Mediterranean confirm, travel is often essential for survival. Nor was Mark Twain’s observation that “travel is fatal to prejudice, bigotry and narrow-mindedness” only for the rich.

The summer holidays are a sacred ritual for most British people, and the Prime Minister, Boris Johnson, is under intense pressure to allow his fellow citizens to go abroad later this year. The assertion by Matt Hancock, his Cabinet colleague who is responsible for health, that the government has no plans to issue “vaccine passports” because “going on holiday is illegal in this lockdown” has not gone down very well.

People are piqued by the mounting evidence that the sleight of hand that was once practised by Indians is common among others too. Under universal lockdown rules, all travellers need to have proof of that they have tested negative for Covid-19 within three days of departure. If, for instance, Air India had not suspended its direct London to Kolkata flight, I would have to take the test in London and the result would be emailed, printed or sent as a text message both to the airline and to the authorities in Kolkata.

This is where things are said to be going wrong, with thousands of passengers entering Britain every week with fake negative Covid-19 test certificates. “We’re catching up to 1,000 passengers every day with a fake certificate,” says Lucy Moreton of the British immigration service. “But that’s just the tip of the iceberg. There is no international standard.” Certificates are not standardised. “Each country -- and within that, each company -- produces something different,” Ms Moreton adds. “There is no way to know which are real and which are not.”

What makes matters worse is that over 40 per cent of British voters accuse the government of lying about the pandemic. They think it is a coverup and a conspiracy involving politicians, scientists and journalists, and certainly not sufficient reason for forbidding foreign travel.

Nadhim Zahawi, Mr Johnson’s Iraqi-born vaccines minister, admits that an international certificate is currently being discussed, but insists that any such document will not be called a “vaccine passport”. Whatever the name, it has always been clear that the vaccinated will be given documentary proof of immunisation. The leaflet asking me to report for my first jab had pictures of the Covid-19 vaccination card with instructions to “keep [it] safe”.

Newspapers recently carried pictures of President Nicos Anastasiades of Cyprus with his vaccination certificate. Another enthusiast, Greek Prime Minister Kyriakos Mitsotakis, signed a deal with Israel on February 8 for the mutual recognition of vaccination certificates to facilitate travel between the two countries. Spain, Kosovo, Iceland, Denmark and Portugal are among the other favourably inclined countries. A Europe-wide vaccination card is being considered, although Brussels has not committed itself so far.

Ideally, people who have been immunised against coronavirus should carry an official card or digital certification, possibly on an app, which would enable governments around the world which want to open up travel again to do so without too much risk of infection. Two British developers, MVine and IProov, are reportedly working on an immunity and vaccination passport which is being tested by the National Health Service.  It would enable a person’s test results or vaccination status to be registered and proved without extensive new infrastructure.

The proposal has received support from many quarters. Saga, the British travel company for passengers aged over 50, has announced that people who register for its holidays or cruises in 2021 must be fully vaccinated. The Australian airline Qantas says it will eventually require proof of a coronavirus vaccine to board its flights. Etihad Airways and Emirates will also use a digital travel pass so that passengers can prove they have been vaccinated or tested for Covid-19. The International Air Transport Association is developing such a pass to be shown at border control or to airlines at the time of check-in.

Such a requirement would not be altogether new. I have mentioned Indian travel in the 1960s. Britain still requires visa applicants from certain countries to produce a certificate proving they have had a recent TB test. Many governments also require a vaccine certificate for diseases such as yellow fever and polio.

The main objection seems to be that vaccine passports will prevent travel by people from countries that will not get vaccines for months, or even years. Human rights groups call this a form of discrimination in favour of the wealthy. There is also the ethical question of those who for one reason or another refuse to be vaccinated.

On balance, however, it’s the greater good that must prevail, and that means setting aside individual or group demands to ensure that all passengers have valid genuine proof of immunisation. Fake documents must be stamped out. But that won’t solve my problem, which is not of a Covid-19 vaccination certificate, but of an airline to accept it.