Politicians have made enterprises of themselves and their constituents 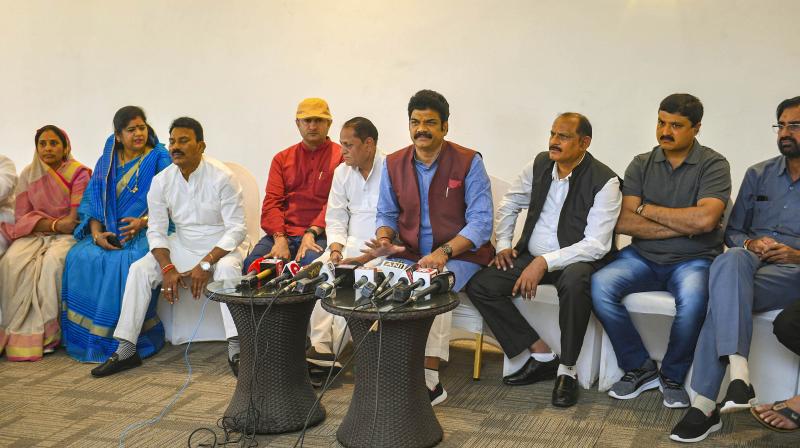 Rebel Congress MLAs from Madhya Pradesh address a press conference at a resort in Bengaluru on March 17, 2020. (PTI)

The commodification of politics is progressing from an emerging market in defections and lawmakers to a maturing market where lawmakers, hopeful candidates and ambitious leaders have formulated the mechanism for doing a trade.

As merchandise, lawmakers or local government representatives have neither principles or ideologies; and as for the ethics of representation and democracy, nobody really cares, including voters, as was confirmed in the Karnataka byelections.

The reduction of politics to a transaction between aspirants and political parties, a trade that has increased in value because the BJP has upped the stakes, is the ultimate desecration of the idea of representative democracy and free and fair elections.

In West Bengal, the Trinamul Congress did much the same thing. In other states, the BJP has acquired legislators, councillors and panchayat leaders in large numbers, turning politics into a trade and politicians into enterprises or commodities.

The 2020 trading season has started with a vengeance for the ruling BJP: Madhya Pradesh, the Rajya Sabha and municipalities and municipal corporations in states where it matters for the party. The trade is low-risk, because the BJP is confident that it has reached a position of dominance.

Even so, there is a conundrum; a creeping increase in the number of states, headed by regional parties, where resolutions have been passed in the state Assemblies against the Citizenship (Amendment) Act, the National Population Register and the National Register of Citizens. Telangana has just declared itself anti-CAA, NPR and NRC.

The trade in lawmakers and councillors and panchayat members does not increase their efficiency to deliver more to their constituents; it probably reduces the quantum delivered, because time and energy is being wasted on the transactions that profits the individual but not the community.

Can one Jyotiraditya Scindia joining the BJP raise the income of the poorest individual in Guna? Can one Dinesh Bajaj change the prospects of an individual whose citizenship may be challenged by the BJP as the party in power pushing through the CAA-NPR-NRC?

The absence of principles in the deal that the BJP and Trinamul Congress have struck is obvious. The Trinamul Congress is prepared to bargain with the BJP and its politics of majoritarian communalism, setting aside its self-appointed role as the principal crusader against the CAA-NRC-NPR. This is as unprincipled as politics can get.

The acquisition of assets – legislators and councillors, by visually dramatic means and undisclosed persuasions -- has become a regular spectacle in Indian politics, with set routines of chartered transport, buses, cars and planes, luxury resorts and ministerial berths.

In the trade, concepts like ethics, ideology, principles are junk stocks, that can be packaged and repackaged as required, exactly like in the real market.

As people who win elections, these persons have a value independent of the party to which they are temporarily attached, it would appear. And that is what makes them assets for the BJP and all other parties involved in the trade, including the Trinamul Congress in West Bengal, the Congress in Madhya Pradesh, earlier in Karnataka, the Janata Dal (Secular), the Communist Party of India (Marxist) and its Left Front partners.

Endowed with a natural flair or an acquired skill, like the animal spirits that energise the markets, politicians have made enterprises of themselves and their constituents.

Over 25 per cent of the BJP is made up of such entrepreneurs; the Trinamul Congress leadership is so crammed with former members of the Congress that it makes little sense to start working out the maths.

The BJP, however, is insatiable. It has turned the Rajya Sabha into a marketplace, because at this point it does not have the majority it seems to believe is crucial to its prestige as the dominant party in Indian politics. Speeding up control of the Rajya Sabha is one of its aspirations, because that would make it exactly like the Congress was in the 20th century; the other one is a target set by the founders of the RSS -- a Hindu rashtra!

So focused is the BJP on having a majority in the Rajya Sabha that it has roped in the just-retired Chief Justice of India, Ranjan Gogoi, as a nominee for a seat. The nomination sent to the President of India for approval means that Justice Gogoi will sit in the Rajya Sabha for the next six years.

It raises a question: is the Rajya Sabha nomination a barter deal or a quid pro quo, as Asadudin Owaisi has said? Either way, Gogoi is a cheap deal; the BJP gained more than it has given; a nominated seat in the Rajya Sabha.

The big trades in defectors in 2020 are the one in Madhya Pradesh and the one seat in West Bengal, where an Independent is being supported by the BJP and the Trinamul Congress.

Whereas Jyotiraditya Scindia got a Rajya Sabha seat in the trade, the legislators who propped up his value are now in limbo. Till they are formally cleared for defection by the Madhya Pradesh speaker and can join the BJP and win back their MLA status, they are assets, but of uncertain value; that depends on getting a nomination and wining an election.

The Rajya Sabha elections in 2020 is just one example. There have been others and there will be others.

The crisis has shattered the hopes of millions and ruined institutions and the infrastructure of the economy, like the banking system. The Yes Bank crisis in the most recent, but there have been spectacular failures in 2019 and earlier.

The degree of policy bankruptcy is measurable by the response of the government to the Covid-19 pandemic; it is also a measure of the irresponsible governance by the BJP and its failure to galvanise the states to act to contain the crisis, that is now teetering on the brink of spreading exponentially and destroying lives and livelihoods.

The political class in India has become so obsessed with its transactions that it has lost sight of the fact that a pandemic will mean shutting down the jobs that daily wage-earners, contract workers and the millions of people working as part of the unorganised labour force do.