A day-trip to Ayutthaya is a first on most tourists’ trip to Thailand, especially to Indians who are attracted by the city’s name 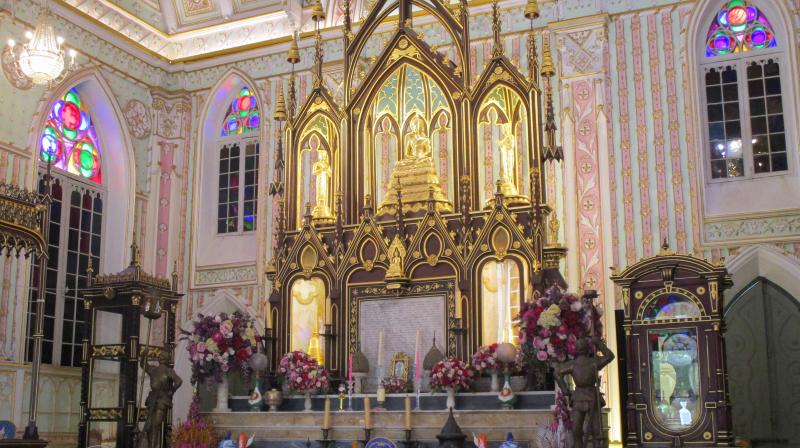 Thailand is getting its act together, in the shape of post-Covid tourism programmes.

A recent trip to the old city of Ayutthaya showed that the country is gearing up, both in terms of Covid precautions, and new attractions.

A day-trip to Ayutthaya,100 km from Bangkok, is a first on most tourists’ trip to Thailand, especially to Indians who are attracted by the city’s name.

The Thai national epic Ramakien is based on the Indian Ramayana, and the town of Ayutthaya is inspired by the city of Ayodhya.

Situated on the banks of the Chaophaya river, Ayutthaya was called the Venice of the East, and was a great trading port, in the 16th and 17th centuries, visited by the British, French, Spanish, Dutch, Portuguese, not to forget Japanese and Chinese.

These ‘foreign’ influences were pointed out to us, on a recent trip to this World Heritage City, which offered new insights into the ancient town.

While the regular touristic trips to Ayutthaya center around its amazing ancient temples (there are at least 300 of them), this trip brought some fresh surprises.

The theme of the trip was ‘The Western Shadows in the Venice of the East.’

Our first stop, was a unique Thai temple designed like a European church, Wat Nivet Thampravat, with stained glass windows, candle stands, stucco work, even metal soldier-figures. The wooden sermon-hall had Western touches too. One of the most striking images was a gorgeous stained glass image of Thai King Rama V in his coronation clothes, high up near the ceiling.

This was the King who commissioned the building of the Thai temple, in Gothic style, with an Italian architect, after being enamoured by Western art forms during his extensive travels in Europe. The temple was built directly opposite the King’s Grand Palace, across the river, and was the Royal Temple which he visited every day.

Today, it is a temple for the public, with a working monastery, where many young Buddhist novices are trained.

We took a quaint cable lift over the river, to our next stop, which was a Japanese Village.

An audio-visual presentation, and a permanent Exhibition, educated us about the strong Japanese presence in Ayutthaya, including the Volunteer Japanese Army, during the time of King Narai the Great in the 17th century. In fact, there were many foreign communities in Ayutthaya at that time, and the King carefully ‘zoned’ them in different parts of the city.

A life-like image of the lady Maria Guyomar de Pinha, serving a wide range of sweets, was in homage to a lady of mixed Japanese, Portuguese, Bengali blood, who introduced many Portuguese desserts to Thailand, which was part of the ‘Portuguese’ influence in the country.

One learnt about the ‘Dutch’ influence, through a map of Ayutthaya painted by a Dutch artist in 1633, who had been commissioned by the Dutch East India Co, and still hangs in the Rijks Museum, Amsterdam. This was part of a series of paintings on the ten important ports of Asia, and Ayutthaya was one of them.

We visited the Ayutthaya Fort, which was designed in Portuguese style, like similar forts in Malaga, as well as in Goa, Dieu (India).

Our trip ended, with visits to Ayutthaya’s famed temples Wat Mahathat (well-known for its Buddha-head encased in a tree), and Wat Chaiwatthanaram, well-known for its tall, 15-meter stupa said to lead to Mt Sumeru (Mt Kailash). The numerous stupas of this temple were inspired by the Khmer architecture of Burma, a country that fought many battles with Thailand, in Ayutthaya.

The various defaced figures of Buddha in the temple, were once blamed on the Burmese, but our ‘Guide’, who was a professor of history at a top Varsity, was honest enough to admit that it was the Thai traders who sold the Buddha-heads to European buyers for huge amounts of money.

Regarding ‘Indian’ influences, the academic admitted that they were everywhere in the temples of Ayutthaya- from the names of the gods, to their images, poses, stories.

It was an enjoyable, enlightening trip, and even the lunch at the river-facing Summer Place restaurant, was a surprise, as one didn’t expect new-age fusion cuisine in an old 13th century town

Most impressive were the Covid precautions. Every time we climbed off and on our bus, we were asked to clean our hands with a hand-sanitising liquid. Fresh bottles of water and cold towels were provided after every stop in the bus.

The toilets at all the sightseeing spots were admirably clean, hygienic, and were equipped with ample soap-solution and hand sanitisers.