Actually, modern Scotland is a liberal, secular and civilised nation which has not known any blasphemy prosecution for more than 175 years 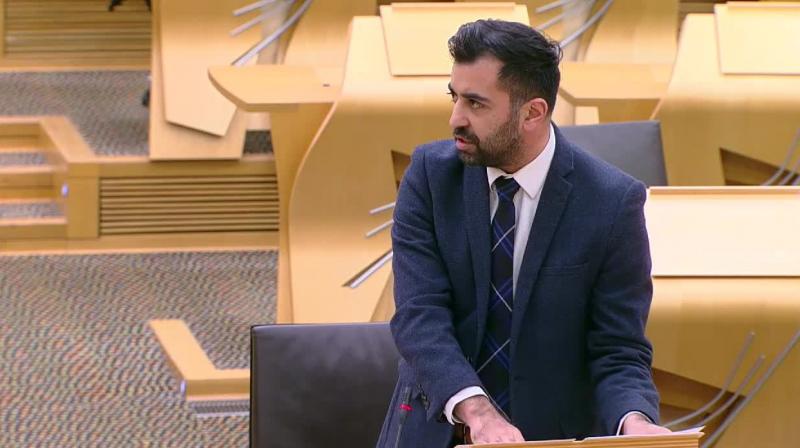 'Through the passing of this landmark bill, Scotland’s Parliament has sent a strong and clear message to victims, perpetrators, communities and to the wider society that offences motivated by prejudice will be treated seriously and will not be tolerated', declared Scotland’s justice minister Humza Yousaf. (Image credit : Twitter/@ScotParl)

India, with its increasingly assertive majoritarian culture, would benefit from an equivalent of the Hate Crime and Public Order (Scotland) Bill that the Scottish Parliament in Edinburgh’s Holyrood House passed last week by 82 votes to 32, following the previous day’s five-hour debate when legislators considered a raft of amendments. In a nutshell, the controversial new measure will extend protection to vulnerable groups and take a far stricter view of the offence of “stirring up hatred”.

As Victoria Atkins, a junior minister in the British government, said in another context recently, the minorities and marginalised communities need such protection. Such Indian groups need it far more than quotas and reservations which, as wise observers have pointed out repeatedly, create a vested interest in backwardness. Indians who would qualify under Ms Atkins’s definition are Muslims, the Scheduled Castes and Tribes, Sikhs and people from the Northeast who do not fit into the common man’s notion of the national stereotype. Myanmar’s Rohingyas are a tragic illustration of the outsider in this sense, as were Jews and the gypsies in pre-World War II Europe.

“Through the passing of this landmark bill, Scotland’s Parliament has sent a strong and clear message to victims, perpetrators, communities and to the wider society that offences motivated by prejudice will be treated seriously and will not be tolerated”, declared Scotland’s justice minister Humza Yousaf. Around 18 hate crimes are committed every day in the kingdom; 6,448 were recorded in 2019-20. “I am delighted Holyrood has backed this powerful legislation that is fitting for the Scotland we live in” Mr Yousaf added.

Although born in Glasgow, Mr Yousaf is of Pakistani origin and can be expected to bring a measure of personal commitment to the cause of equal treatment for people of all creeds and colours. “The bill’s passage has shown Holyrood at its very best -- a collaborative, diverse and determined Parliament which we should all be proud of”, he says. “Robust scrutiny has ensured we have met the right balance between protecting groups targeted by hate crime and respecting people’s rights to free speech.”

He has been at pains to reassure everyone that the new law will not try to instigate any kind of witch hunt. Nor will it curb free speech. Asked about racist jokes and drunken anecdotes, he was quick to stress that the “behaviour has to be threatening or abusive and intended to stir up trouble, so a racist joke is clearly not going to reach that threshold. There will be no prosecutions under the new law.

“If your unreconstructed uncle comes in, has too many sherries at Christmas dinner and says something they shouldn’t do, which creates great offence to his bisexual niece, for example, that is not going to be prosecuted.” He fleshed out the point by recounting an abusive tweet he had received but would ignore. “The beauty of the Hate Crime Bill is that you can say that all day long (not that I’d encourage it!) and it would not be a criminal offence.”

That may seem like a tolerant and sensibly lenient attitude to take. Yet, leniency can be mistaken for tacit official sanction or condonation. Nazi anti-Semitism did not spring up overnight. German and Austrian culture had a long history of anti-Semitic witticisms which may have concealed a real societal bias. Nirad C. Chaudhuri recalls a Bengali rhyme in which the people of Odisha and Bihar are presented in negative terms to illustrate insularity. Similarly, the English have “jokes” at the expense of the Scots and the Welsh.

Believing laughter to be the best antidote to hatred, the British once offered prizes to comedians who could tell jokes about their own communities. The 1968 Race Relations Act made it illegal to refuse housing, employment, or public services to anyone on the grounds of colour, race, ethnic or national origins. The deeper expectation was that the law would change people’s outlook because the law-abiding British would avoid anything illegal. And, indeed, race relations and social attitudes have been completely transformed. The three Race Relations Acts (two others followed in 1976 and 2000) accomplished what the old laws could not.

Stirring up racial hatred has been an offence in Scottish -- and British -- law for decades. But the old laws were not regarded as providing adequate protection to minority groups. Hence Scotland’s Hate Crime Bill was introduced in April 2020 following an independent review by Lord Bracadale, a distinguished Scottish judge, who recommended that all the old laws on the subject be consolidated into one new bill. The measure updates the list of entities protected by the law while also expanding the list. It also identifies new “stirring up of hatred” offences that apply to all the categories -- age, disability, race, religion, sexual orientation, transgender identity and variations in sex characteristics –that the bill mentions.

It is also noteworthy that the bill anticipates religious bigotry and defangs bigots in advance by abolishing the offence of blasphemy. Actually, modern Scotland is a liberal, secular and civilised nation which has not known any blasphemy prosecution for more than 175 years. But the authorities are taking no chances.

“I look forward to overseeing the implementation of this legislation which will ensure Scotland’s justice system can bring perpetrators to account and provide sufficient protection for individuals and communities harmed by hate crimes” Mr Yousaf promises.

There is no reason why he should be disappointed provided freedom of speech is not curbed and justice is speedy and effective. India has not forgotten the 1968 Kilvenmani massacre when 44 Dalit men, women and children were burned alive, and an appeal court acquitted the convicted murderers on the ground that landlords of their status did not commit such crimes. A new law must also punish rumour mongering about beef, killing cattle and romance across religious borders.

India demonstrates that the law by itself is simply not enough. It must also be administered by politicians of goodwill and integrity.