Migrant workers’ plight: Ignore at your own peril 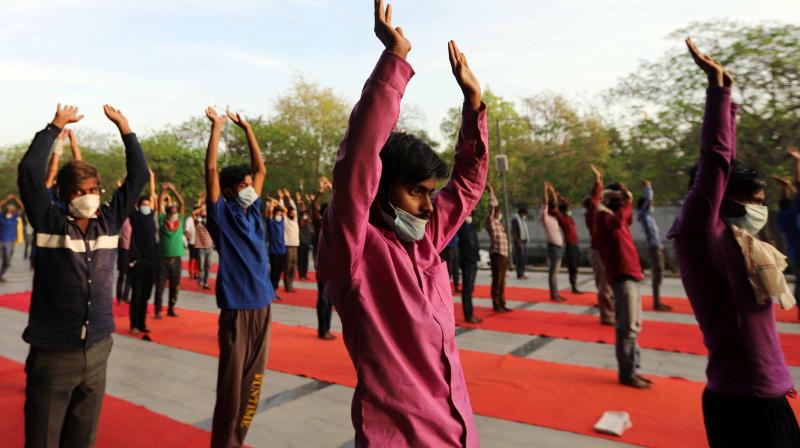 Migrant workers and homeless people being made to do yoga at New Delhi's Yamuna Sports Complex which was converted into a makeshift camp for those stranded in Delhi without a home. (DC Photo: Pritam Bandyopadhyay)

There has been a stream of gut-wrenching reports about stranded migrant labourers in different cities across India in the past few weeks. More will follow as the coronavirus pandemic-induced lockdown is extended till May 3. But let us not delude ourselves into thinking that the precariousness of migrant lives is a new phenomenon.

While we must keep up the pressure on governments to deal with the immediate needs of migrants -- food and shelter -- it is imperative to address the political economy of migrant misery.

Migrant workers have been neglected and invisibilised for long because politically they are not significant. They constantly move between the city and the village and between worksites. Often, they are registered as voters in their villages but cannot vote because they are somewhere else at the time. Welfare benefits are tied to their place of origin.  Local elected representatives in places where they work do not feel responsible for them. We in middle-class India have not cared much either about how migrant workers live, as long as they delivered.

A new report by a group of volunteers who call themselves the Stranded Workers Action Network (SWAN) brings some critical facts to the fore. The network of over 70 volunteers interacted with 11,159 stranded workers -- split into 640 groups -- since March 27.

“Migrant workers have lived and worked in the blind spots of our societal imagination. Scenes of their discontent and resistance against the lockdown and the sudden extension came to the fore recently in Surat and Mumbai as thousands gathered on the streets. All they want is to be extricated from the continued trauma and helplessness and be able to go home; the most basic of human needs,” the report says.

The roots of their helplessness lie in the informality of the work they do. Millions of migrant workers in sectors such as the construction industry, for example, leave no paper trail -- they are not on any official payroll. For all intents and purposes, they don’t exist. Therefore, they can be treated and are treated like disposables – 89 per cent of those surveyed have not been paid by their employers at all during the lockdown.

How do policies and directives taken to help migrants play out on the ground? The report points out that though the Union home ministry issued an order on March 29 saying employers should pay workers full wages and homeowners should not charge rent from stranded workers to prevent their migration due to the lockdown, only about nine per cent of those surveyed said they were paid, that too partially; some who were given food by employers have been told the cost will be deducted. Some migrant labourers have been threatened so that they do not complain, says the SWAN report.

India has never lacked policies or even laws. The problem is always in execution. In many laws, there is a binding obligation on Central and state governments to record migrant labour -- the Inter-state Migrant Workers Act (1979), the Street Vendors Act (2014) and even the National Disaster Management Act (2005), among others, as the report notes. There are other laws that mandate workers’ entitlement to payment of full wages on time, to displacement allowance, a home journey allowance including payment of wages during the journey and so on.

The harsh ground reality is something else -- the majority of stranded workers who were surveyed were not able to recall the name of the main builder or company they have been working for. Nor did they have any social network to tap into at their places of work.

“Their only link to the city or town where they are working is through their contractor. They were only able to name their contractor, not even the name of the registered company of the contractor. In most cases, contractors have switched off their phones leaving workers to fend for themselves,” says the report.

The lockdown is only visibilising what has always been true and what has been overlooked -- the absence of administrative oversight on contract labour and lack of accountability of both employers and governments, as the report correctly notes.

My own conversations with stranded migrant workers in several cities in India over crackling phone lines also point to the same conclusions. Many state governments are providing relief. Many non-profits like ActionAid India, Oxfam India and others are at work. But the demand for food and shelter far outstrips the supply. “We are making a special effort to look for those who are falling through the cracks, the really vulnerable people,” Samadhan Patil, who works with ActionAid in Madhya Pradesh, told me. Mr Patil and his team have been busy distributing food to migrant workers stranded in Bhopal.

Rukshana Khatun from Malda, West Bengal, who was working as a construction labourer in Bhopal, told me she had not been paid for the past three months. “I am worried about my children who live in the village. I used to earn Rs 400 a day but now I have very little money left and can’t send any back home.”

The misery is everywhere. Along with hungry and desperate migrant workers taking to the streets, images of people looking through garbage heaps and eating rotten bananas on the banks of the Yamuna in New Delhi will be seared in the minds of those who saw the footage.

What should the governments do? Right now, it is critical to cater to the immediate pressing needs of food and shelter and medical care. There must be universal access to foodgrains, pulses, cooking oil and soap, irrespective of whether someone has a ration card or not.

Alongside, governments have to start addressing the root causes of the migrants’ misery. The number of migrant workers all over the country has gone up dramatically this century, as villages are less and less able to provide livelihood options. Governments have turned a blind eye. If politicians want to be elected, they cannot afford to do so any longer. The number of migrant workers is simply too large, and they will find ways to express their misery.

Clearly, it is not enough to have laws. Governments must ensure compliance. The Interstate Migrant Workmen (Regulation of Employment and Conditions of Service) Act 1979 seeks to protect migrant workers from abuse and exploitation. But as many experts have pointed out, its provisions have gone unimplemented for decades.