Chandrakant Lahariya | Can ‘monkeypox’ disease develop into a pandemic?

In the ongoing monkeypox outbreak, it will not be surprising if one or more cases are reported from India as well 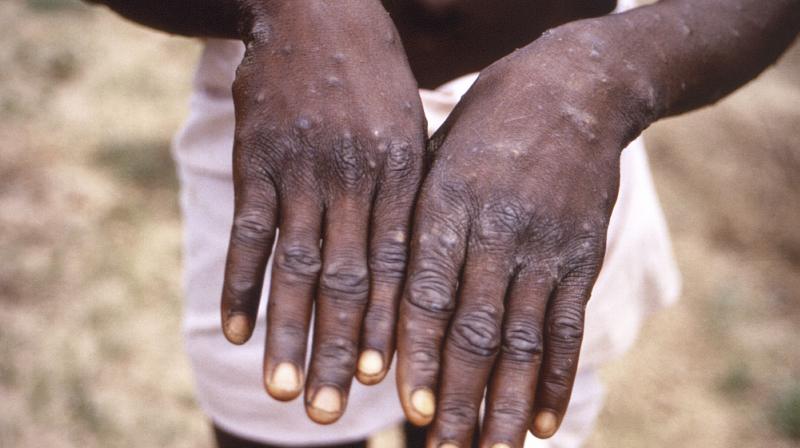 Monkeypox is a zoonotic disease that spreads from animals to humans. It belongs to the family of smallpox viruses. (Photo: AP file photo)

Starting in the mid-1960s, intensive search and case identification was one of the eradication strategies for smallpox. Following those efforts, many countries had successfully brought down smallpox cases to zero.

However, to ensure sustained “zero smallpox status”, intensive field search and case investigations were carried out on a regular basis. In Zaire (a country in Africa, now known as Democratic Republic of Congo, or DRC), the last confirmed case of smallpox was reported in 1968. However, as part of eradication efforts, during an intensive search in 1970, in Zaire, a nine-year-old child with clinical symptoms and skin rashes similar to smallpox disease was identified. His sample was collected, which was tested negative for smallpox virus, but a new virus was isolated, which had never been reported to cause illness in humans. Before that, the virus was detected only once in 1958 in monkeys in a laboratory in Denmark. It was named as the “monkeypox” virus.

However, in May 2022, things appear to have changed. On May 6, a laboratory-confirmed case of monkeypox disease was reported from Britain. This person had travelled to Nigeria on April 20 and returned on May 3. Since then, until June 12, nearly 1,250 cases of monkeypox have been reported in at least 28 countries across Europe, North America and Australia. Most of these had never reported monkeypox disease.

Monkeypox is a zoonotic disease that spreads from animals to humans. It belongs to the family of smallpox viruses. The incubation period — the time from exposure to first appearance of symptoms — is five to 21 days. Key clinical features include fever, body aches, rashes and swollen lymphatic glands. In settings where the disease is already endemic or a confirmed case has been detected, the fever, rashes and swollen glands (lymphadenopathy) should raise suspicion of monkeypox. The disease is mild and self-limiting, but children, pregnant women and people with suppressed immunity are at a higher risk of severe outcomes. There are two clades or strains — West African and Central African (Congo Basin) Clade. The ongoing outbreak is attributable to the West African clade, which is comparatively less dangerous and with a low case fatality of zero to three per cent. In fact, no death has been reported from non-endemic countries in the current outbreak.

As with most other viral diseases, the treatment is based on symptoms. A new drug against monkeypox, Tecovirimat, was approved in early 2022 and is available in some countries. Two other antiviral drugs, Cidofovir and Brincidofovir, are in clinical trial stages.

The smallpox vaccine is known to have up to 85 per cent effectiveness against monkeypox. However, with the eradication of smallpox in 1980, vaccination for the general population was stopped. Therefore, those born before eradication who received the smallpox vaccination may have some protection against monkeypox. As immunity declines with time, it is difficult to say how much protection they have.

Currently, some smallpox vaccine stockpiles have been maintained, in the United States and some countries in Europe, to respond to any unexpected event such as an outbreak from laboratory spread or bioterrorism. However, smallpox vaccine stocks are not widely available and not available in India either. A specific monkeypox vaccine (MVA-BN; named after Modified vaccinia Ankara — Bavarian Nordic strain) was approved in the year 2019 but is not widely available. Limited stocks are available in some countries.

In today’s world, the spread of a disease from one part of the world to another part is entirely possible as we have witnessed with the Covid-19 pandemic. In the ongoing monkeypox outbreak, it will not be surprising if one or more cases are reported from India as well. A number of new viruses have emerged and re-emerged in India in the past few years — including Nipah, Zika and West Nile virus. Therefore, being prepared to handle the emergence/outbreak of monkeypox is the only logical approach. The increased surveillance, tracking of the contacts and vaccination of family members and other possible contacts (“the ring vaccination”) are the approaches, which are proven in stopping the monkeypox transmission.

Though the ongoing monkeypox outbreak in non-endemic countries is unprecedented, most experts agree that the disease is unlikely to turn into a pandemic. The reasons include that monkeypox is not a new virus; there are known methods of prevention; it is less contagious; the disease spreads mainly from animal to humans, human to human transmission being fairly low, and smallpox vaccines having a proven role in preventing transmission are available (though supply needs to be scaled up). Therefore, we need to be prepared but there is no reason to worry.

The ongoing monkeypox outbreak, though, raises a much bigger issue. Despite being endemic in 11 countries in Africa for nearly 50 years, the lack of funding for research on drugs and vaccines against monkeypox and insufficient efforts to ensure an assured supply of the available smallpox vaccines is a reminder that diseases that affect low-income countries rarely get sufficient research and policy priority. Today, the world is paying attention to the monkeypox, arguably because the high-income countries are getting affected. It’s most likely that from now on, there will be more funding for scaling up research, deployment of vaccines and other measures.

The ongoing monkeypox outbreak is another reminder that the health of every citizen on this planet is interconnected. Regardless of which country is affected, the global community should fight and tackle it together. The world has failed to share the Covid-19 vaccines with poor countries and is paying a heavy price in the form of a prolonged pandemic. We can only hope that the monkeypox outbreak in non-endemic countries will be a timely reminder for global collaboration.