Patralekha Chatterjee | A breakdown of governance? We need healing, rule of law

A bulldozer is not an accessory of good governance. And stone pelting is not the way to progress 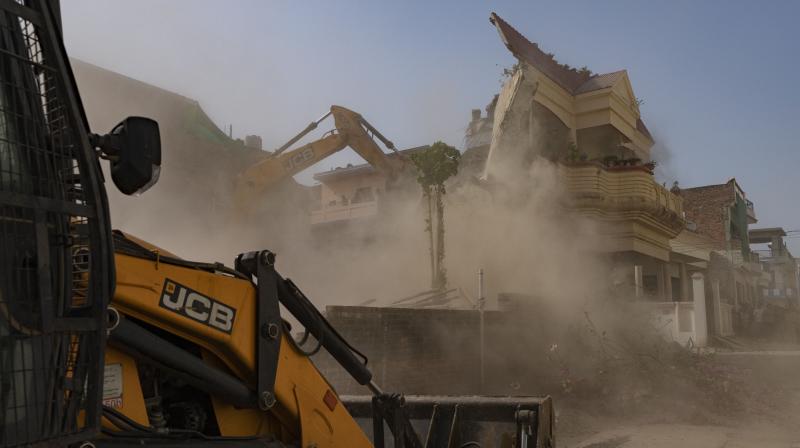 The battle of searing images must stop. For the past few days, even as the temperature soared, scorching visuals of a nation trying to settle arguments through the brazen display of force and recklessness have been beamed into our living rooms -- angry protests against disparaging comments on Prophet Mohammed by a former spokesperson of the ruling BJP, stone-throwing crowds, bulldozers crushing a two-storeyed house to rubble in a lane in Prayagraj (formerly Allahabad). Now, there is a fresh wave of disturbing images of youth-led street protests against the Narendra Modi government’s new “Agnipath” scheme for short-term contractual recruitment into the armed forces. The first images I saw on my television screen on Thursday were from Bihar — a passenger train set ablaze, smoke billowing from burning tyres elsewhere, protesters on the rampage. There are reports about stone-pelting and arson and the blockade of highways from several other states — Madhya Pradesh, Uttar Pradesh and Haryana.

None of this augur well for a country where over half the population is still under the age of 30.

The stormy protests from different groups of people for different reasons are also raising uncomfortable questions about how the protesters will be dealt with. Uttar Pradesh, for example, where Muslim protesters say they are being targeted, is also seeing protests from youth belonging to the majority community who are unhappy about the Centre’s new military recruitment scheme. On Thursday, there were reports of stone-pelting in rural Agra.

The bulldozers, the arsonists and the stone-pelting protesters collectively signal a failure of governance and a near-breakdown of the social contract between the government and the governed on one hand and between different groups of citizens on the other.
Where do we go from here?

Much has already been said about the demolitions in Kanpur and Prayagraj and the cherry-picking of illegal structures and the systematic targeting of the minorities in many parts of the country.

Along with everything else that needs to be done to quell the hate genie, there is a desperate need for a national conversation about the importance of the due process of law in a language and idiom that everyone can understand.

Troublingly, a significant number of Indians display scant understanding about the due process of law. Many don’t even wish to understand.

What we see around us as homes are reduced to rubble and public property is destroyed is a dangerous mix of apathy, fear and prejudice premised on the belief that the rule of law is only for “good people”, typically those who think similarly. And that others do not deserve due process.

This blurriness on the issue of due process is not new. Recall what had happened after Nirbhaya’s brutal gangrape and murder -- the shrill chorus of demands from many Indians, including those in my middle-class neighbourhood in New Delhi, for the “immediate hanging” of the culprits. There were many, including middle-class professionals, who did not see the need for a charge sheet or a judicial process. It is to the credit of the Delhi police and India’s criminal justice system that despite the shrill demand for instant justice on the street, due process was followed.

Guilt can only be determined through due process of law and the courts. A person is not guilty just because the executive (meaning the police) thinks so. It does not matter who the person is.

This apathy and lack of understanding of what is due process enables the powerful to take advantage of the weak.

There is a well-established pattern as to who takes the blow when the rule of law is selectively applied. Research by Housing and Land Rights Network, an NGO, shows that forced evictions and home demolitions in India in 2020 severely affected marginalised communities, including the minorities, in several states across India.

Sadly, the public reaction to recent blistering images isn’t a comforting one. There is gloating at the misfortune of those one considers the “other”. And there are reckless statements reeking of bile and hate.
The conversation about the rule of law and due process is happening among a limited group of people. This has to change.

It’s good news that a group of former Supreme Court and high court judges sent a letter to Chief Justice of India N.V. Ramana urging him to take suo motu cognisance of the demolition of protesters’ houses by the Uttar Pradesh government. That the letter also referenced videos of the UP police beating up protesters to highlight the “breakdown of the rule of law and a violation of the rights of citizens”.

The Supreme Court has asked the Uttar Pradesh government to desist from carrying out demolitions except “in accordance with the procedure established by law”. It has given the Yogi Adityanath government three days’ time to explain how the recent demolitions were in compliance with existing laws as the state claims. This was in response to a plea by Jamiat Ulema-i-Hind which wants the court to intervene and stop the demolitions.

The UP government says the demolitions are not in violation of the rule of law and the municipal laws enacted by Uttar Pradesh. We have not heard the end of the story. The matter will now be heard on June 21. Meanwhile, the images of the destruction of private property — homes, lives and dreams — as well as government property are going to be hard to erase.

Both are interlinked. Moving forward means having the necessary conversation about the rule of law and making sure that everyone understands why we all stand to benefit from it. This is going to be challenging because there is no standard understanding of the rule of law. And inequities persist.

Whether one benefits from due process sometimes depends not just on who one is but where one is.

Consider what happened in April this year. Soon after bulldozers entered Delhi’s violence-hit Jahangirpuri and began pulling down alleged illegal constructions and encroachments in the area, the Supreme Court ordered the status quo maintained on the North Delhi Municipal Corporation’s demolition drive. That meant restraining the civic body from proceeding further. It is a different story that it took at least another hour and a half for the civic body to actually stop the demolition. The stated reason: non-receipt of any order from the apex court.

The bottom line: A bulldozer is not an accessory of good governance. And stone pelting is not the way to progress. India needs the rule of law and due process for everyone, and a healing touch. Today, these are desperate necessities.