Saeed Naqvi | The Prophet stir: If communalism hurtles at velocity, where’ll it crash?

Has the RSS & BJP plugged their ears so firmly that Atal Behari Vajpayee’s whisper doesn’t reach them: 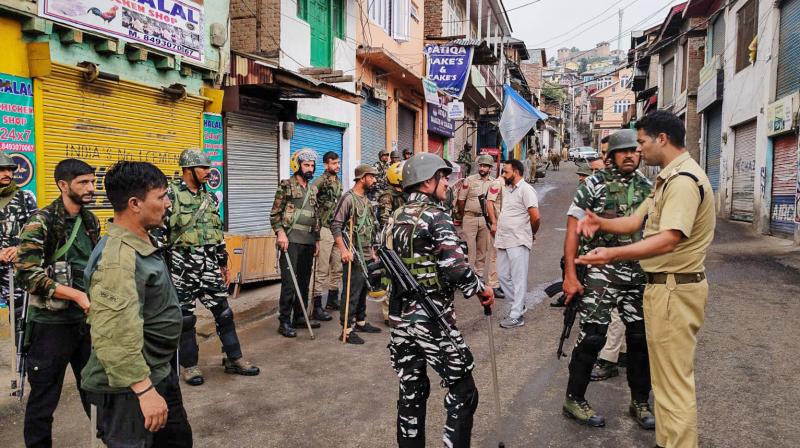 Security personnel keep vigil during a two-hour relaxation in the curfew imposed by administration in wake of possible communal flare-up over controversial remarks by two now-suspended BJP leaders against Prophet Mohammad, at Bhaderwah in Doda district, Wednesday, June 15, 2022. (PTI Photo)

Ignorance — that perennial source of communalism — was in operation again: Nupur Sharma and Naveen Jindal clearly didn’t know the red line of decency that shouldn’t be crossed while addressing anyone as revered as the Prophet. It’s not just a religious thing. Try insulting Rabindranath Tagore: Kolkata will burn.

The Islamic etiquette is: “Ba Khuda deewana bash-o/ Ba Mohammad Hoshiyar”! (In plain language, take liberties with God, but be careful with Mohammed). When Chandrabhan Brahmin, Dara Shikoh’s prime minister, crossed the red line, the intention was not to insult the Prophet or hurt believers. To paraphrase, he said since his hand was in God’s hand, why should he worry about Mohammed? Chandrabhan’s verses were cited as evidence of Dara Shikoh’s liberal court, which showed how intellectually indebted Dara was to his great-grandfather, Akbar.

It reflected on Akbar’s widespread popularity that the revolt by Sheikh Sirhindi against the emperor’s experiment with eclecticism in the form of “Deen-e-Ilahi” (Religion of God) were no more than pinpricks. If he was a larger threat, it wouldn’t have been possible for Jehangir to have him confined to jail in Gwalior.

The security of the empire is reflected in Dara’s audacious cultural experiment. He opened the way to Indology in Europe by having the Upanishads translated into Persian. His Majma-ul-Bahrain (Confluence of the Oceans) was an epoch-making effort to find common ground between Sufism and Vedantic speculation.

The clergy must have been hopping mad at such excesses. Aurangzeb’s 49-year rule was wobbly in the sense that he spent considerable time in the Deccan campaigns. The clergy wasted no time in climbing ladders around him. The Gyanvapi Masjid on the site of an old Shiva temple, is more a function of Aurangzeb’s weakness than his assertiveness. It brought cheer to the clergy burdened by the memory of the Dara years.

The promise of the great civilisational compact Akbar and Dara had given notice of survived the Aurangzeb years. There was a burst of it in Mohammed Shah Rangeela’s court in Delhi, in Wajid Ali Shah’s court in Lucknow until the last Mughal Emperor Bahadur Shah Zafar was dispatched to Yangon by the British where he died in the garage of John Davis, a junior officer.

This very amateurish incursion into history on my part has picked up in frequency since May 2014 when Prime Minister Narendra Modi made his very first speech in Parliament. “Hamein 1,200 saal ki ghulami se nikalna hai.” What Mr Modi meant was, we have to come out of 1,200 years of subjugation. Most of us had parroted since 1947 that all Indians together got rid of 200 years of British rule. Mr Modi’s statement makes that stand on its head.

Over the years one has got used to the Muslim period being underplayed. Take for instance Unesco’s project for elevating Delhi to a heritage city. This story goes back a decade, way before the appearance of Narendra Modi. For years notes went up and down on the subject. An initial stumbling block was that all the seven cities of Delhi but one happen to be Muslim. The seventh is Lutyens’ Delhi. They all fall well within the period which Mr Modi considers the years of “ghulami”, but I am mixing up eras. The Unesco story belongs to the Congress era. Ultimately, after years of bargaining, the choice was narrowed down to two — Lutyens’ Delhi and Shahjehanbad, or Old Delhi. Dossiers were exchanged between Unesco, the Archaeological Survey of India and the Delhi Heritage Society. But on the appointed day, when the agreement with Unesco was to be signed, a mysterious hand swooped the documents away even as the assembled officials watched. Enlightenment came through the agency of a group of retired judges and their families on a guided tour of the Akshardham Temple. The guide may have exceeded his brief but he informed the stunned group that the history of Delhi starts with the Akshardham Temple.

The protests in Arab capitals over the remarks on Prophet Muhammad by BJP spokesperson Nupur Sharma and Naveen Jindal represent spontaneous anger, or do they also denote new affiliations in the region? Internally, a stifled Muslim community has found in the protests an opportunity to vent their anger.

Is New Delhi on notice that its anti-minority excesses will from now on be under scrutiny in the Arab world? I doubt if recent events indicate an irreversible transformation. Once the dust settles on the current protest, I expect it will be business as usual with the Arab world. For New Delhi, it’s a wonderful opportunity. It must dismount the tiger of communalism. This policy will give negative results because:

In my recent travels within India, I don’t see much traction for high- voltage communalism outside the Hindi belt.

The BJP is already in a position to whistle, throw its cap and celebrate its status as a Muslim-mukt party. Out of 301 seats in Parliament, soon there will not be one Muslim in this galaxy. If Hindu consolidation was required to consolidate BJP votes for parliamentary elections, that has been achieved. This percentage in the Assemblies is unachievable.

Beef, halal meat, hijab, love jihad, namaz in the open, mosques as stone-pelting stations on Hindu processions — all these and more have been tried to keep the communal temperature on a simmer.

In any case these tricks, by themselves, don’t galvanize the nation. All these tied to nationalism do. This entails Kashmir always on the boil and Pakistan on a permanent enemies’ list. Has the RSS and the BJP plugged their ears so firmly that Atal Behari Vajpayee’s whisper doesn’t reach them: “We cannot change our neighbours!”