Kulbir Kaur | The disappearing art of the family photo album

Everything was screaming commoditisation of relationships and personal memories 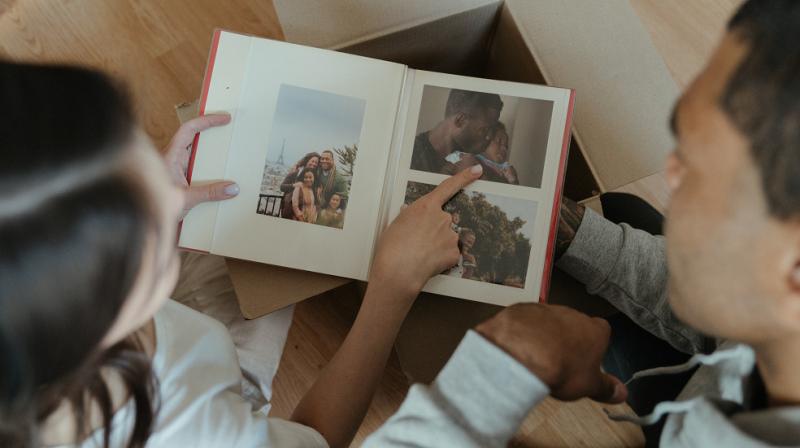 The ‘family album’ is the most cherished granth of every family. (Photo by arrangement)

If ‘parentese’, a sing-song speaking style adopted by parents, has recently been declared as a universal feature of all human societies, based on an analysis of 1,615 voice recordings in 18 languages from 410 parents, then family photographs share the same status — they have been the carrier of human emotional history and the way we look at ourselves and others cutting across borders and speech.

The ‘family album’ is the most cherished granth of every family. A storehouse of photographs of all sizes, colours and events, it is like the traditional “Bhanumati ka Pitara”, from which the magician keeps taking out an endless series of rabbits, each representing a memory. I have vivid recall of my father, glimmer of pride in his eyes, archiving family photographs in a beautiful pearly album with red roses engraved on it lovingly. On thick black paper, every photo took its assigned position duly guarded by four triangular shaped golden brackets. These golden marshals carefully held the black-and-white photographs in place and perfectly bracketed it inside a chronology. Each black sheet was followed by a translucent white one so that the photographs would not stick to one another. But this is exactly what they did in our minds. Framed memories frequently impinged upon each other.

As adults, we could not help noticing a timeline of events but at the same time there was familial politics of intimacy and affection shamelessly glaring at us. There was a pattern, in which age, sex and hierarchy each played a role. The firstborn (my sister) and the first son got the maximum attention and shared pride of place, leaving the middle ones in the middle, or rather in the corner. Even the second son remained in the shadow!

The heady cocktail of the 3Fs — Family, Food and Festival —remained incomplete without the visual treat of ‘Fotoo’. Which too often turned into a roller-coaster of nostalgia, with family members popping colourful Parle Poppins of memory, replete with smiles, laughter, pain, anger, regrets, affection and what not. If one particular picture is a source of pleasure to one member, it might trigger a flashback of hurt for another. A blamegame might begin. Sometimes, starting with a simple comment or a harmless nudge, it snowballs into a volatile situation in which positions will be taken in different rooms and corners of the house while the history of the family flooded the corridors taking the form of arguments, emotions and tears. Thank God, this pilgrimage to the family album always happened after a sumptuous feast, otherwise the festivities might have turned into a fiasco.

Unlike the ever-available camera in today’s era of selfies, every photograph required preparation in the early days, as well as imagination and props which ultimately became a story stored in the memory card of the family members. Why was one family member not there? Why were we wearing those traditional dresses? Why is one laughing and the other looking gloomy? In fact, my father used to be the director of the photographic stories. He would carefully select the background and the things to be kept in the front like flowers or a globe or a gigantic flying eagle. We would suppress our giggles, poke each other, and change our expressions, and lo and behold, an ideal family photo would be dished out. Given the limited number of frames in each reel, every effort was made to capture a perfect “happy moment”, the Kodak moment, so to speak. The wait for the final print and the first look of the photographs was priceless. It was a far cry from today when we have digital cameras with instant view, unlimited clicks and infinite filters — it has all become so monotonous! There is no nostalgia. Rare moments are now everyday affairs.

“Seeing” the family photographs in those days used to be a personal “show and tell” session where every picture mirrored a part of our souls. In one of the photographs, my daughter, then just a three-year-old child, is helping her dadijaan make dumplings for the traditional Mughlai mutton dish, “akhti”. It has become difficult to even utter the word akhti in our house today without remembering my late mother-in-law. My daughter, her dadi and akhti have all merged into a single frame.

What if there are no “framed memories” or family photographs? What if you lose them in a fire or riots? And to make matters worse, have to prove your ‘existence’ to deserve the sanctified status of a citizen? Loss of identity can reduce you to a mere refugee, stranded on the threshold of life. May be, that was the reason why 90-year-old Reena Varma went back to Pakistan on July 20 to connect with the memories of her family.

But why would anyone put their family photos on display and in a marketplace? Granted, the currency there is only approval ratings. No, I am not talking about today’s picture-perfect pouting families on social media. When I went to the Jew Market in Kochi, I was puzzled to see sepia-coloured vintage photographs of families in the shops there. It was also in Kochi that I mistook a pre-wedding shoot for a film shooting. It was unknown territory for me and I was surprised at the amount of time, money, and attention spent on the location and clothes of the “would-be family”. Everything was screaming commoditisation of relationships and personal memories.

One last question! How many of you actually take a print of photographs? None? Well, perhaps, just one then, for the picture to be displayed on the day of death ritual. Thus it is that Neena Kulkarni, a middle-aged character in the Marathi movie, Photo Prem, embarks on a journey to find one perfect photo meant to be used after her death. No doubt, we live in the digital dark age, as commented by scientists.