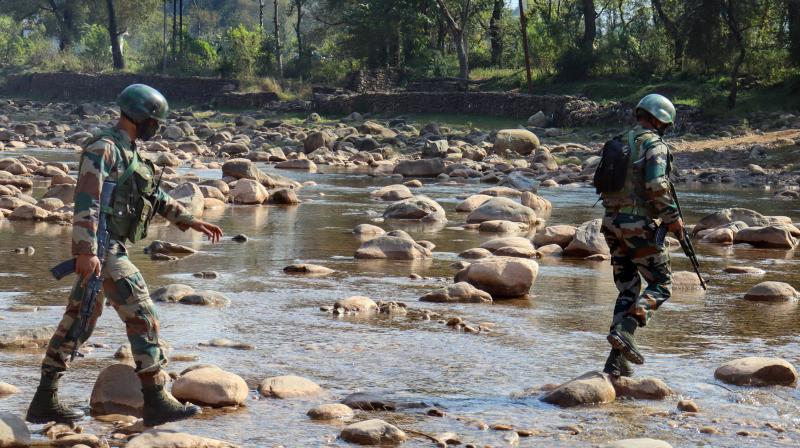 NewsIn February 2021, India and Pakistan made a surprise joint announcement that they would “strictly” observe a ceasefire at the Line of Control. (Representational Image/PTI)

Pakistan last week released its National Security Policy 2022-2026, a document co-authored by its national security adviser Moeed Yusuf, but acknowledging inputs from several government entities. The policy articulates what it sees as Pakistan’s vision and priorities and provides a detailed implementation framework. About half the document was released to the public and half kept classified. The document emphasises economic security and says that traditional security is only a means to achieving economic prosperity. It speaks of health security, climate change and water stress, food security and gender security.

It refers to terrorism with these words: “The most acute form of efforts to undermine the stability and national harmony of a society is terrorism.”
The internal security policy objectives are: “To ensure the writ of the state in all parts of the country to guarantee security of life and property of all citizens. Prioritise combatting terrorism, violent sub-nationalisms, extremism, sectarianism, and organised crime. Ensure Pakistan remains a secure destination for intellectual activity, businesses, investors, and visitors.”

Externally, it says it will “seek regional peace through normalisation of relations in our immediate neighbourhood on the basis of mutual respect and sovereign equality”.

Pakistan is on the threshold of change because of a corridor that China is building connecting China with the Arabian Sea via Pakistan-occupied Kashmir. This will help connect Pakistan to Central Asia, especially if Afghanistan remains stable.

Our government should be studying the document (and also trying to access those parts which are classified) to see if it needs responding to and whether our national security policy is affected by this.

Unfortunately, for this to happen, we must first have a national security policy, which we do not. Retired Gen. Prakash Menon has noted that, for several decades, India’s political guidance to the military had been oriented towards Pakistan as the immediate threat. But now that the Chinese threat has reached our doorstep, this has changed. The political objectives expected to be achieved by the military resided in a 2009 document called the “Raksha Mantri’s Directive”. That directive, Gen. Menon wrote, “continues to lack parentage for the lack of a coherent national security strategy. The Defence Planning Committee, headed by the NSA, was assigned this task two years ago. Nothing has emerged so far”.
He adds: “In essence, the directive is shaped by inputs not flowing from requisite logic and awareness. Only the adoption of and adherence to the dictates of a politico-strategic approach can provide the desired inputs.”

In 2018, the government created the Defence Planning Committee. This was to be chaired by India’s national security adviser Ajit Doval and include the foreign secretary, defence secretary, Chief of Defence Staff, the three service chiefs and secretaries of the finance ministry. It had the enormous task of looking after “national defence and security priorities, foreign policy imperatives, operational directives and associated requirements, relevant strategic and security-related doctrines, defence acquisition and infrastructure development plans, national security strategy, strategic defence review and doctrines, international defence engagement strategy”, and so on. It met once, on May 3, 2018, and does not appear to have met after that. Our national security adviser is not a scholar like Moeed Yusuf, but a man of action and a man of the field. This is true of the rest of the government too.

In January 2021, a think tank put out a paper by a retired general. He wrote that the changes introduced in the military gave an opportunity for the government to display its strategic and military acumen. Unfortunately, the report concluded that the Chief of Defence Staff was “yet to articulate a defence strategy”.

In 2020, India was compelled by China to change its national security strategy. From counter-insurgency, which the Army has been focused on for years, we shifted to conventional war.

Late Chief of Defence Staff Gen. Bipin Rawat (who along with Army Chief Gen. M.M. Naravane was a counter-insurgency expert) accepted in June 2021 that China was now India’s primary threat: ‘When you have a larger neighbour, which has got a better force, better technology, you obviously prepare for a larger neighbour.” This has upended what is called the Doval Doctrine, which posits that terrorism is India’s primary national security threat and that Pakistan is the primary adversary. In February 2021, India and Pakistan made a surprise joint announcement that they would “strictly” observe a ceasefire at the Line of Control. This was a surprise as earlier the Indian government and its ministers had made aggressive statements against Pakistan. It was clear that events in Ladakh had done two things. First, India would shift focus away from the Line of Control in the west to the Line of Actual Control in the east. Before Galwan, of the Army’s 38 divisions, 12 faced China while 25 were deployed at the India-Pakistan border, with one division in reserve. After the reassignment, 16 divisions would face China. A total of 200,000 Indian troops were now at the China border, fully stretching the Army and reducing India’s military options. Second, India was forced to shift its resources from the Navy to the land border. This was accompanied by a demotion of the so-called “Quad” alliance with the United States, Japan and Australia, and the militarisation of another alliance (AUKUS) against China between the traditional allies US, Britain and Australia.

All these changes have come due to external pressure and because of a national security policy. This means that we are being compelled to act in a particular way rather than being in control of things and anticipating them. These are the things to think about when we look at Pakistan and its new National Security Policy 2022-2026.