S. Korea caught in crossfire between North and America 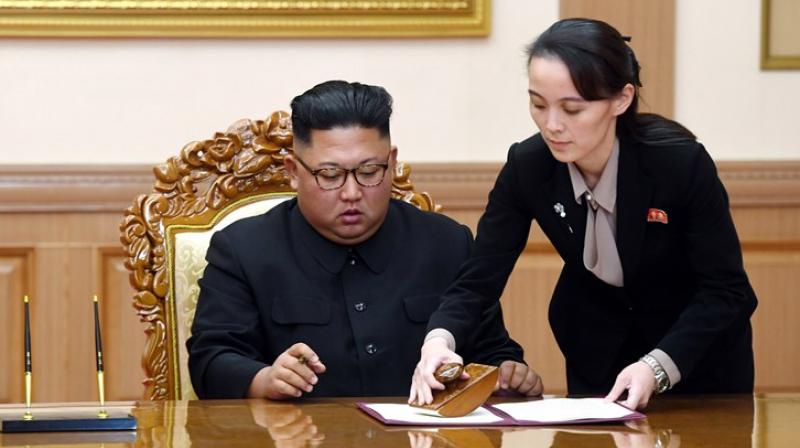 Since mid-May, North Korea has been vehemently protesting against balloons with propaganda leaflets sent by North Korean defectors from near the DMZ in South Korea towards the North.

Chairman Kim Jong-un’s younger sister Kim Yo-jong (KYJ) is an important top functionary of the North Korean regime. She has been playing a prominent role in public life as an alternate member of the Politburo.

Kim Yo-jong fired the first salvo on June 4 when she threatened to scrap a military tension reduction agreement with South Korea and close major exchange projects unless the sending of balloons to North Korea was stopped.

This warning was issued by Kim in her capacity as first vice-department director of the central committee of the Workers’ Party of Korea.

Kim also said that the North-South Korea Summit agreements of 2018 and the agreement between the two militaries had intended to stop all kinds of hostility and tension-raising action and the sending of anti-North Korea leaflets ran counter to such agreements.

As there was no concrete action by Seoul to stop the balloon senders from continuing their activities, on June 9, North Korea severed all inter-Korean communication lines with Seoul including a hotline between Chairman Kim and President Moon established in the heady days of 2018.

Twice-daily calls between Pyongyang and a South Korean liaison office set up in 2018 in the North Korean border city of Kaesong have also ceased. This liaison office has been temporarily closed since January because of Covid-19 restrictions.

North Korea has announced that the existing channels of communication between the two militaries will also be cut. These measures were announced to the world in a statement issued jointly by KYJ and Kim Yong-chol, vice-chairman of the Central Committee of the Workers’ Party of Korea.

On June 12, the second anniversary of the Trump-Kim Singapore Summit, North Korean Foreign Minister Ri Song-won said that the hope for an improved relationship “which was high in the air under the global spotlight two years ago has now been shifted into despair”.

Upping the ante on June 14, KYJ in a statement hinted at military action by the North. Following up, on June 16 the North Korean military announced that it was “studying an action plan” for the army to move back “into the zones that had been demilitarised”.

A significant outcome of the 2018 thaw between the two Koreas was a detailed plan of de-escalation around DMZ by the two heavily armed militaries. Since then, 20 guard towers in the DMZ were demolished with the goal of transforming the demilitarised zone to a zone of peace.

In a swift move for damage control, President Moon issued a statement on June 15 to mark the 20th anniversary of the first ever summit between North and South Korea in 2000.

He recalled the historic outcome of his own two summits with Chairman Kim Jong-un, the Panmunjom Declaration of April 27 and September 19 2018 Joint Declaration in Pyongyang and said that “Chairman Kim Jong-un and I cannot backtrack on the promise of peace we made to the 80 million people of our two countries”.

Signalling a blunt rebuff to President Moon and to catch global attention, on June 16, North Korea dramatically blew up the South Korean liaison office at Kaesong.
President Moon Jae-in’s strategy has been to strive for making North-South Korea relations independent of the vicissitudes of US-North Korea negotiations about the denuclearisation of the Korean peninsula.

After the disappointing no-deal summit between President Donald Trump and Chairman Kim Jong-un in Hanoi in February 2019, the US-North Korea dialogue has stalled.

While North Korea has insisted on a major easing of the sanctions against it as a reward for some concessions already made e.g. cessation of nuclear and long-range missile testing, United States is firm on agreement over a clear roadmap and timeline for denuclearisation of North Korea before any meaningful relaxation of the sanctions.

Curtailing the disruptive activities of North Korean defectors is a gesture which South Korea should be prepared to make as the stakes are high. Reportedly, a legislation enabling the South Korean government to restrict such activities is under preparation.

The series of statements emanating from Pyongyang since early June and dynamiting the Kaesong liaison office reveal the growing frustration of Chairman Kim Jong-un.

This sudden escalation by the North may also have been encouraged by China as it finds itself beleaguered by President Trump and on the back foot globally because of its duplicity in handling the Wuhan virus.

President Moon would need all his diplomatic skills to avoid getting caught in the crossfire. No relief is expected from the US as President Trump is distracted by the election and the Chinese virus.