some of the “Freedom Day” plans which were to be announced by the Prime Minister, Boris Johnson, on this weekend, are likely to be shelved 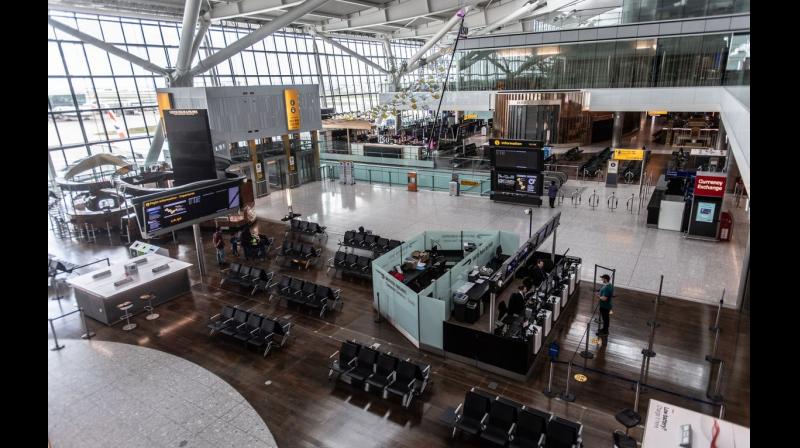 The biggest frustration for the British, who are incorrigible travellers, is that they are having to scrap their summer holiday plans. Representational Image. (Twitter)

Who would have thought there could be floods ruining the poshest part of London? This is what happens in “third world” countries! And usually when floods destroy some godforsaken part of the globe — after the deluge, we end up sending aid from the rich coffers of UK! But climate change is becoming a great leveller. While there were worse reports of people missing and presumed dead in Germany due to floods — basements of houses in Kensington and the North were ruined, as water overflowed everywhere. Luckily, South London (where we live) was considered safe. For once it was an advantage to be on the other side of the river.

We are used to the odd shower spoiling the day at the beach but this was so strange with transport suspended, and almost unbelievably, Euston flooded.

Meanwhile — more gloom was in store last week as the newly appointed health secretary Sajid Javid announced via Twitter that he was Covid positive, even though he is double jabbed with AstraZeneca. He is not alone and scientists now estimate that the number of people catching the virus despite being vaccinated is higher than those who are yet to receive the jab. In England the figures have soared to over 50,000 cases Covid cases, daily — which is around what it was in January, and a lockdown is predicted by September.

And so some of the “Freedom Day” plans which were to be announced by the Prime Minister, Boris Johnson, on this weekend, are likely to be shelved. After all, if the health secretary is isolating, this may even mean that more members of the cabinet have got infected. The one plus factor in all this is that if you are double jabbed — your infection is likely to be mild. So that is another reason to take the vaccine. However, the actual effect of even mild Covid is as yet unknown, and you can obviously infect others too.

The problem is that the virus is constantly mutating. We are still facing the effects of the Delta strain, and God knows how many threats from newer versions — and even European countries are moving from an “amber “ alert to “red”. The biggest frustration for the British, who are incorrigible travellers, is that they are having to scrap their summer holiday plans! And there is a strong likelihood that those coming from countries like France may have to quarantine in a hotel for ten days.

To be honest, we have no choice but to get vaccinated and move out. How much longer can we cower and stay at home? For many working people “work from home” is not an option at all. For school children it is essential to “socialise” with their peer group.

I think many of us are now going to be cutting down our “online” time — to find alternatives as working or living in “isolation” was what we did to reform criminals in the past. It appears to be a less than efficient way to tame the virus, because we also require herd immunity.

We kept our heads high because, at the end of weeks of the European football championship, England had reached the finals, 55 years since its World Cup final victory against Germany. This time we were drawn against Italy. Even Her Majesty rose to the occasion and sent a cheering message to Gareth Southgate, the manager and his team. It was to be at Wembley live with spectators just like old pre-Covid times.

Alas, it was another wash out worse than the flooding. England lost to Italy despite 1-1 in normal time but losing on penalty kicks. As it was while Wembley was full to capacity of 60,000 fans, another few thousands had gatecrashed, jumped over barriers and got into VIP seats. The defeat was too much. In a penalty shoot out, the individual players failing to score was a crucial letdown for the crowds. Unfortunately, the three who missed were young black players including the marvellous Marcus Rashford who fought so well for school children’s midday meals to be kept going during lockdown and forced Boris Johnson to fork out the extra money.

Then we saw the ugly side of England, best forgotten. The social media was filled with hateful racist jibes for the three. Football is not like cricket where sportsmanship shines. It has left a bad taste in our mouths.

It is not unusual to have bad behaviour from crowds after a football match — testosterone wins every time. But racism is a very ugly turn — and has been soundly condemned by all, including the Royals. Can we change ourselves — or has this year of isolation made things worse?