There are some whispers that external affairs minister S. Jaishankar’s policy framework is now in shambles 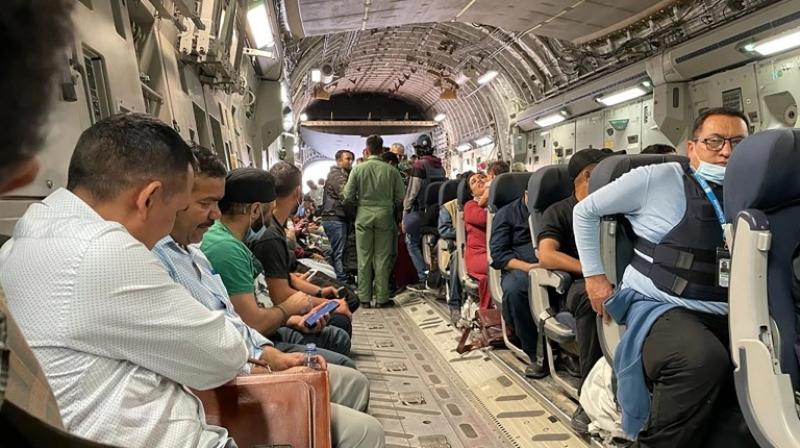 Indian nationals sit on board an Indian military aircraft at the airport in Kabul. (AFP Photo)

Did India miss a bus in Afghanistan? With the Taliban takeover of the country complete, the ominous silence from the ministry of external affairs (MEA), except for the routine statement on protecting Indian interests and giving temporary visas to Afghan refugees, was, however, broken by global outcries. While Western powers were expected to do this, for India whose relationship with Afghanistan goes back a few millennia, the speed at which events have occurred in Afghanistan has come as a bit of a shock for some desi mandarins.

There are some whispers that external affairs minister S. Jaishankar’s policy framework is now in shambles. That aside, babus worry that both the Pakistan angle and the China threat gets to grow into a bigger thorn in India’s vulnerable North-west. Foreign secretary Harsh Vardhan Shringla and his cohorts at the Afghan desk may have some massive round robin-ing to do, and our encirclement worry is on the front burner yet again.

Some in the MEA feel that we clearly missed the signals emanating from the Doha meet last August, to which India, incidentally, was not invited, and some believe that we left starting direct talks with the Taliban leadership far too late. We now may have to stand along the sidelines as a spectator than a player in this episode of the fast-paced “Great Game”. But at least one source of comfort is that our embassy evacuation was executed well in the nick of time.

When a repatriation raises eyebrows

Frequent lateral shifts are par for the course. You may feel they happen more often in the Narendra Modi sarkar but there’re no stats readily available. Seasoned babus are usually not fazed by such disruptions. Yet in a recent major reshuffle of over a dozen senior IAS officers, one move by the government seems to have raised eyebrows. 1989-batch IAS officer Shubhra Singh was certainly caught by surprise. She was removed as chairperson of the National Pharmaceutical Pricing Authority (NPPA), the independent regulator responsible for drug pricing and availability. She has been repatriated to Rajasthan, her cadre state, and replaced by K.K. Pant, a 1993-batch officer of the Himachal Pradesh cadre.

Sources tell DKB that the repatriation was unexpected since she was widely expected to be empanelled for a secretary-level post in the government, having missed out her chance on the first list. Usually while shifting or repatriating senior officers, the government takes them into confidence, but like many administrative norms, this convention too may be heading for oblivion. Any examples you can think of?

Return of the native

It seems that Shah Faesal, the IAS officer from Jammu & Kashmir who resigned in 2019 in protest against the Centre’s policies towards the region, may rejoin the civil service. Sources have told DKB that the Centre has still not taken on any decision on Faesal’s resignation, and the rules state that in such a scenario the resignation is considered withdrawn automatically! The official stance, according to the department of personnel and training (DoPT), is that the resignation “is still under consideration”. Mr Faesal controversially quit the IAS and formed a political party in Kashmir, the Jammu and Kashmir People’s Movement. He was a strident critic of the Centre’s decision to make Article 370 inoperative in J&K. But his stint in politics was largely uneventful and he announced that he was done with political life. Apparently, after his resignation, Mr Faesal’s request to be allowed to travel and settle in the US was denied. Rejoining the IAS may be his best option, sources say. But will he take it?