Every horror perpetrated on every woman is born out of what we have come to accept as the male huddle, including rape. 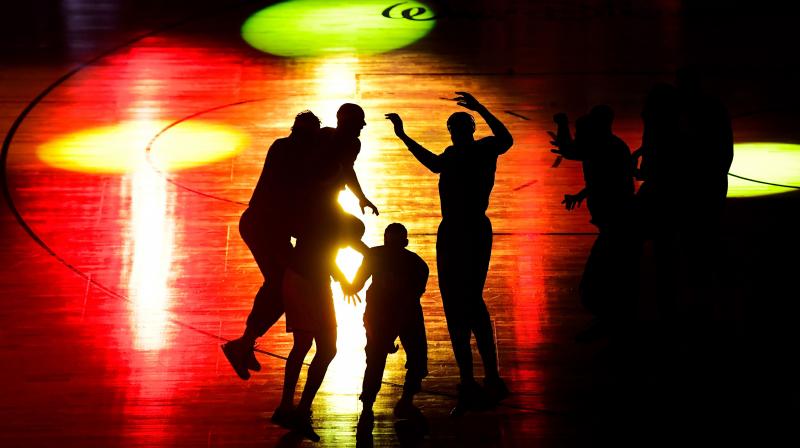 In popular culture, the male huddle has been among the most paeanized of phenomena. They even have a term for it: bromance, a genre in films even more popular than the dreaded rom-com. (Representational Image: AFP)

Not long ago, when party-going was still a possibility, my wife walked into a human formation that’s existed since the beginning of time: a huddle of men. Basically an informal, yet impervious, circle made up exclusively of males, talking and doing all things hairy-chested, and, well, manly. She had been observing the ‘patriarch’ of the bunch, trying to persuade a fellow huddler (trying his best to leave) to stay for just a couple more drinks while his wife fidgeted a few paces away.

‘Why don’t you stay out of this,’ responded the pushing-sixty-former-bad-boy-arthritic-headman. ‘This is man stuff.’

‘Really?’ responded my wife. That’s all she said. Softly. Not a word more. Something in her tone made the guy stop. The couple left quietly soon after. But not before turning and throwing grateful backward glances at my wife. (I know stories where a woman questions a man – especially one who is part of a group – rarely end this way.)

It came to me in my thirties, late learner that I am, that I had never been part of all-male huddles. In school and college, and later, at family gatherings, get-togethers with old friends, the piece I formed never seemed to fit neatly with a satisfying little click into any of the negative spaces left unfilled in masculine huddles. Whatever condiment I brought seemed to clash with the ingredients needed for a perfect male huddle.

In popular culture, the male huddle has been among the most paeanized of phenomena. They even have a term for it: bromance, a genre in films even more popular than the dreaded rom-com. The ad scene is so full of commercials that depict ‘boys’ getting together and ‘outwitting’ a woman or women, that the brands are not even worth mentioning. I could be wrong, but if you check the stats, the chances of all-male groups accounting for the largest traffic on WhatsApp is a near certainty.

Whatever the social class, men going off to Bangkok, Goa – or a holy site atop an all-male hill – having obtained ‘hall-passes’ from wives and girlfriends, has become not just a rite of passage, but something the women cropped out of this picture have been taught to rationalize as ‘boys will be boys, even when they are grown men, especially when they are grown men, that’s how it is. And we get some time off, lol.’

But the truth is, it is anything but time off, for Nirbhaya, for Manisha, for the millions of women of all ages in cities, villages, pubs, boardrooms, fields, abandoned factories, open maidans, and even places of worship. A male ‘allowed’ to take time off from being a person to be a ‘man’ and do boys-will-be-boys things – by a mother, sister, wife or girlfriend – isn’t doing any other woman a favour.

Every horror perpetrated on every woman is born out of what we have come to accept as the male huddle. Including rape. Especially rape. And every rape is a gang rape. Even the ones perpetrated by a solitary male.

For, it is in these exclusive penis-only clubs (that take birth sometimes even in primary school), operating at village squares and executive washrooms in skyscrapers with equal impunity, that violence against women, starting from the verbal, moving on to the psychological, and graduating to the physical – basically man stuff – is taught. Fine-tuned. Encouraged. And finally applauded and defended. Collectively.

History has proved irrefutably that a male huddle’s main purpose isn’t really as much about fostering intimacy between men as igniting and nurturing the very opposite towards women.

I’m not sure what the solution to a male huddle is but it isn’t a feminine version of it. All that women getting into huddles, and forming exclusive sisterhoods, seem to achieve is keeping men out temporarily (which, in and of itself, isn’t at all a bad thing.)

The answer lies with the men, really. (At least, the beginning of an answer.) As it ought to. It is, after all, up to the perpetrator to find the remedy. Naive as it sounds, men who care, men who want see a change – and there are many, thankfully – should actively shun all-male gatherings, both the transient, like ‘organically’ formed huddles at a get-together, and the organized, like boys’ nights out, clubs, fraternities, or, for that matter, political parties that promote hypermasculinity.

Stand alone, men. Give a clear signal to women that you refuse to be part of the problem any longer. Make it normal for women to look you in the eye – with something other than fear, anger or revulsion.

Mohan Guruswamy | India’s culture & how it evolved… Yoga is exercise, it’s not Hinduism

Dilip Cherian | EC & UP: All 3 commissioners from state; Arora yet to find a role