Before the summit, Mr Biden had said the US would defend Taiwan 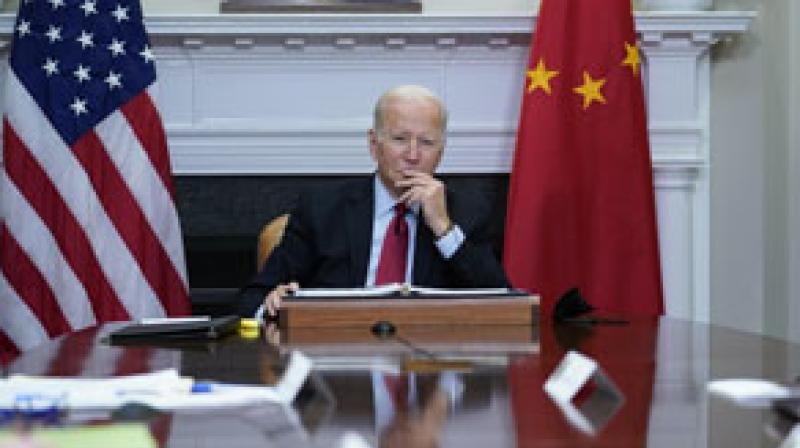 The Biden team says not to worry; they’ve teamed up with the CPC to combat climate change. (AP)

On November 11, the sixth plenum of the Communist Party of China formally enthroned Xi Jinping as its new “Great Helmsman”, in the mould of Mao Zedong, giving Emperor Xi absolute dictatorial powers over his 1.5 billion subjects. The global media flashed videos of Mr Xi striding through Beijing’s massive Zhongnanhai hall to the robotic applause of thousands of identically attired CPC comrades. The CPC’s propaganda machine had its script ready, and the American media too blandly recited that Mr Xi was “elected” to a third term, with a nod to China Daily -- on sale at every virtually American newsstand -- which proclaimed China is a “full democracy”. American TV anchors provided no analysis or context of Mr Xi’s “election”; after flashing images of his triumph, the networks pivoted back to nonstop coverage of the Alec Baldwin film set shooting incident.

Everyone in Asia knows this is a farce. In 2016 President Xi muscled his comrades into breaking the two-term leadership rule to consolidate power. He then made a sharp turn backwards to the cruel reign of Mao Zedong; building a personality cult to purge his rivals, crush dissent, faith, art, enslave millions in concentration camps, and project military force across Asia.

On November 17, China’s overlord held a “virtual summit” with US President Joe Biden. The Wall Street Journal headline proclaimed: “Xi-Biden cool down hostilities”. CNN reported the meeting was “positive”. It was indeed, for the Chinese Communists. President Biden never once mentioned the Covid-19 pandemic’s Wuhan origins or the genocide of the Uyghur people. Before the summit, Mr Biden had said the US would defend Taiwan. But during the four-hour discussions, Mr Xi warned Mr Biden that aiding Taiwan was “playing with fire”. The US President then reaffirmed American support for the “One China Policy”, legitimising the CPC’s pledge to seize democratic Taiwan by force. Moments after the summit ended, PLA bomber jets violated Taiwan’s airspace.

The US media never reports that in 2019 the CPC had walked away from a trade deal and declared a “people’s war” against the United States, deploying their doctrine of “unrestricted warfare” by inflicting biological, information and economic carnage. The Wuhan virus cost the US at least $55 billion in damages, but the CPC wields great power over the corporate elites who control the media narrative, so the CPC will not be held accountable for the pandemic, and the American people do not realise the Chinese Communists are waging war on their homeland. When, over two decades ago, then President Bill Clinton pushed China into the WTO in 2000, a PLA general wrote: “Now we can destroy America from within.” Twenty-one years later, the CCP is making good on this pledge.

The Biden team exploits “Climate cooperation” to justify its surrender to the CPC. This is also a farce: Mr Xi didn’t bother to attend the Glasgow climate summit. When Mr Biden’s climate czar John Kerry was asked about working with a government profiting from the Uyghur genocide, he replied, with a chuckle: “That’s not my lane. I’m the climate guy.” Many Americans expressed shock at this blithe dismissal of the CPC’s monstrous atrocities, but Mr Kerry, like his peers in the privileged circles of America’s politics and finance, has investments in CPC companies, and is actively lobbying against the Uyghur Forced Labour Prevention Act, which passed the Senate in July but is now stalled in the House of Representatives.

The US Democrats have long demonstrated their fealty to Communist China. In 1994, Mr Clinton delinked trade and human rights with the CPC, offshoring US manufacturing to China, thereby decimating America’s industrial heartland.  The Biden family’s deep ties to the CPC are widely documented. This was on flagrant display in 2014, when Hunter Biden flew to Beijing with his father, then Barack Obama’s vice-president, and returned with $1.5 billion from a CPC entity, for a fund Hunter created with then secretary of state John Kerry’s stepson, Chris Heinz. Now the CPC is getting what they paid for: appeasement. Sam Faddis, a US intelligence analyst who once served in New Delhi, stated: “The CPC is the greatest threat the US has ever faced. It is aggressively seeking world domination. And we have a government filled with people co-opted by the CPC.”

The Indian media is by and large reporting the facts on the ground in Asia, showing satellite photos of multiple nuclear missile silos in Xinjiang and Tibet, PLA troops and missiles stationed along the India-Tibet border, Islamist militants, armed and emboldened after Mr Biden’s retreat from Afghanistan, spilling blood across Pakistan and Kashmir, and PLA bomber jets provoking Taiwan. In Xinjiang PLA battalions were photographed practising drills on a model US warship, and a new Pentagon report revealed China is “seeking to quadruple its nuclear warheads by 2030”. One might think this would elicit interest from US news bureaus and officials, but when news of China’s alarming military expansion was released, the Biden administration issued a tepid statement of “concern” while vigorously promoting World Pronoun Day.

Xi Jinping has achieved his Chinese Dream -- Dictator for Life -- but the Chinese economy is in peril. Floods have destroyed huge agricultural tracts, property giants are defaulting, cities are without electricity, and Mr Xi has ordered the Chinese populace to prepare for food storages. Is this a veiled warning of a land war with India and an amphibious strike on Taiwan? The Biden team says not to worry; they’ve teamed up with the CPC to combat climate change.

In Chinese astrology, 2022 is the Year of the Water Tiger. Get ready for battle.