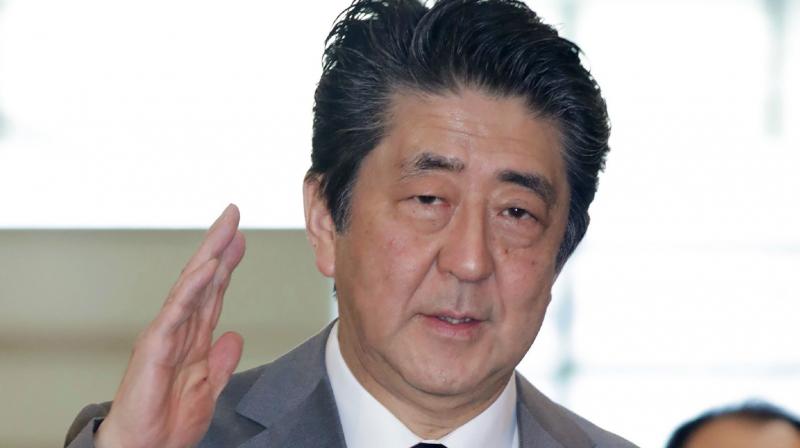 Japan's Prime Minister Shinzo Abe gestures as he arrives at his office in Tokyo on March 18, 2020. Abe said the country will expand quarantine measures and a ban on entry from parts of countries including Italy and Spain affected by the coronavirus outbreak. (AFP)

Japan, a country prone to earthquakes, tsunamis and typhoons, is also known for its capacity to use advanced measures to counter disasters effectively. But the present coronavirus epidemic has undoubtedly created one of the most serious challenges to the Japanese government under prime minister Shinzo Abe.

The coronavirus could not have hit Japan at a more inappropriate time. Indeed, Abe was expecting rosy days in 2020 for two reasons. First, it was he who took the initiative to host the Summer Olympics in Tokyo during July/August this year and he went all out to make it one of the most spectacular events of the decade.

Already, the Japanese government is reported to have spent a whopping $26 billion on preparations for the games. Abe believed that if the 1964 Tokyo Olympics heralded the advent of a new Japan on the Asian scene, the 2020 mega event would demonstrate Japan’s pre-eminence as an economic and technological giant striving to promote peace and harmony in the world.

Though the Olympics are scheduled to be held only from the last week of July, the coronavirus has already cast a shadow of doubt on the upcoming event. Many people have raised the question on whether it would be wise or practical to go ahead with the games when thousands of Japanese and foreigners are expected to gather in Tokyo.

The key question they raise is: Can normalcy be restored and the virus contained in time before the commencement of the event?

Second, the long-anticipated state visit to Japan by Chinese president Xi Jinping in April has already been postponed and no fresh dates for his visit have been announced so far.

Sino-Japanese relations have shown strong signs of improvement in recent months. No Chinese president has made a state visit to Japan since 2008, and in that sense, Xi’s visit would have been a significant landmark in their bilateral engagements.

Both Abe and Xi were expected to redefine their bilateral relations in the light of the present favourable conditions and project a new vision of their partnership for the coming years. But considering the rapidly spreading coronavirus, both leaders decided to postpone Xi’s visit.

The coronavirus has definitely deprived the two countries, at least for the time being, of a great opportunity to define the dawn of a new era.

At present, recording a total of more than 1,000 coronavirus cases, Japan ranks fifth among the most affected countries after China, Italy, South Korea and Iran.

The number of cases in Japan includes 706 people aboard the cruise ship Diamond Princess which was quarantined at Yokohama port. The epidemic has so far claimed 12 lives, six of whom were connected with the cruise ship.

According to reports, 27 out of the total of 47 prefectures have reported about the impact of the virus. Hokkaido accounts for the highest number of cases and the prefecture has declared a state of emergency. Other prefectures that have reported more than 30 cases are Tokyo, Kanagawa and Aiichi.

Many believe that when the epidemic started in January 2020, Abe appeared to be rather slow in reacting to it. But in February, the situation became quite serious with the quarantining of the cruise ship Diamond Princess in Yokohama port and the virus soon spread among 3,700 crew members and passengers.

Japan was caught unawares and not fully equipped to tackle the problem. There were reports of the absence of testing equipment and shortages of masks and toilet papers. Many believed that Abe was too preoccupied with preparations for president Xi’s visit to Japan to give adequate attention to the coronavirus issue.

There was a realisation in Japan that its lack of response to the coronavirus stemmed from two reasons.

First, while Japan has the capacity and expertise to respond effectively to natural disasters, the same cannot be said about its measures to counter the spread of infectious diseases.

Having failed to undertake proactive measures in the initial stage, Abe has now taken some strong steps. For instance, he ordered the closure of all schools until the end of March. He also enforced severe restrictions on the entry of thousands of Chinese and Korean travellers. Visas issued to 2.8 million Chinese and 17,000 South Koreans have been suspended. Chinese and Korean visitors will be asked to stay in separate and designated facilities like hotels. Entertainment and amusement centres and theme parks have closed down and people have refrained from going to hotels for family parties. Sports and music programmes have been cancelled.

But these measures also have had a strong negative impact on the economy. For instance, the non-entry of thousands of Chinese and Korean tourists in particular have seriously hurt the tourist industry. Tourists from China and South Korea accounted for nearly 50 per cent of all travellers to Japan in 2019.

Second, there is a strong realisation in Japan that the existing laws dealing with infectious diseases are not adequate to fight Covid-19, which is different from the earlier known infectious viruses. The Shinzo Abe government is now finding it necessary to enact a new law. If the law is enacted, it will give Abe the power to enforce a state of emergency in certain areas in the country in order to cope with the rapidly spreading coronavirus that could have a devastating impact on the people.

Such a declaration of emergency would also authorise prefectural governors to regulate people’s activities. A bill to revise the existing laws has already been tabled before the Japanese Diet.

As expected, some parties have objected to the bill on the grounds that it would violate people’s rights and privacy. With a view to strike a compromise, Abe has tried to mould a consensus on the issue by meeting with five major Opposition political parties. But Abe appears to have almost succeeded in convincing his rivals on the need for revising the existing laws.

Finally, the present coronavirus crisis has highlighted two major inadequacies in the Japanese system in fighting the spread of infectious diseases. The first one relates to financial limitations. In the current parliamentary debates on the issue, many lawmakers stressed the need for substantially increasing the financial and personnel strength of the National Institute of Infectious Diseases (NIID) on the lines of the US Centres for Disease Control and Prevention (CDC). It is reported that the draft budget allocated for NIID for the fiscal 2020 is only 6.4 billion yen, and its total staff is 348. On the contrary, in the US, the CDC is operating with a budget 200 times larger and a staff 40 times bigger.

The second one relates to the absence of a centralised controlling agency with a swift response system. Until now, the Cabinet Secretariat has acted as the controlling agency tasked with spearheading measures to stop the spread of infection.

But it has specialised in crisis management at times of large disasters like earthquakes, hijackings, terrorist bombings and missile threats. It lacks experience in undertaking counter-measures to control infections. In the current session of the Japanese Diet, there were demands that “We need to have a commanding organisation which specialises in infection control like the American Centre for Disease Control and Prevention”.