Opinion   Columnists  19 May 2018  What K’taka foretells: Not all gloom & doom
Opinion, Columnists

What K’taka foretells: Not all gloom & doom

The next two important achievements have been taming inflation whilst playing a careful sherpa to economic growth. 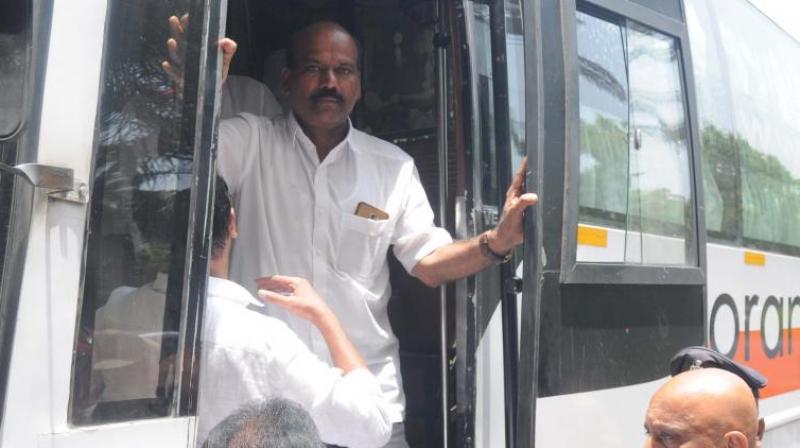 Karnataka Congress MLAs getting down from a bus in a private hotel in Hyderabad on Friday. (Photo: Deepak Deshpande)

The tea leaves, following the Karnataka elections, are as muddied as they were before it — a hung House, a history of unstable coalitions and in your face examples of money power and shabby politics all around.

The BJP not getting a majority has spooked the financial markets. Frankly, it matters little which party or parties have a majority as long as it or they live through the five-year term, thereby allowing the outstanding administrators which Karnataka has to go about their jobs and for business to plan ahead. The Narendra Modi government is a bellwether for markets simply because it has demonstrated vastly superior capacity to get the rusty levers of government working.

The only real gainer in Karnataka is a regional party — the Janata Dal (Secular) under the leadership of H.D. Deve Gowda, a former Prime Minister of India (June 1996 to April 1997) and his son H.D. Kumaraswamy. The latter was chief minister of Karnataka (February 2006 to October 2007), courtesy a power-sharing agreement with the BJP after the JD(S) walked out of a similar arrangement with the Congress in 2004. The record does not inspire confidence in its commitment to political stability.

Having said that, Karnataka is not a backward state where political stability is critical for survival. Germany took nearly half a year to form a coalition government after inconclusive elections in September 2017 without any adverse economic consequences. Karnataka, like Germany, has a high capacity to absorb the absence of elected government. It is above the median, amongst Indian states, in its socio-economic indicators. It is one of the four major national hubs for the tech. industry. Services account for 60 per cent of the state’s domestic product. Per capita income is 20 per cent higher than the national average.

Yogendra Yadav, a veteran political analyst, has rightly said that the hung Assembly in Karnataka is a routine affair. It acquires significance only because of what it might foretell about political economy responses at the national level. Shorn of all jargon, the question is — will the BJP continue its reformist economic agenda or will it be abandoned for more populist measures, in the run-up to the spate of Assembly elections and the national election in 2019?

Mr B.S. Yeddyurappa, the state BJP leader, on being invited by the governor, Mr Vajubhai Vala, to take charge as chief minister, quickly declared that farm loans, possibly amounting to `250 billion, are waived, even before he could prove his majority. This could be a panic attack, foretelling that the BJP may not find the numbers to cobble up a majority. If it does not, the unseemly political manoeuvring to gain power will be a self-goal.

The two biggest reforms that have been initiated by the Narendra Modi government are incentivising formalisation of the economy via the Goods and Services Tax and using the Insolvency and Bankruptcy Act to end the long festering, toxic ecosystem of Indian banks, which spawns stressed assets. Both actions increase tax revenues, reduce the pressure on public financial resources and control black money. These are signature reforms with significant economic gains. Imposing penalties on businessmen, who misuse or default on bank loans, has enormous popular support. Neither is likely to be abandoned by the Modi government.

The next two important achievements have been taming inflation whilst playing a careful sherpa to economic growth. Low international oil prices helped finance minister Arun Jaitley to liberalise the petroleum retail price regime whilst simultaneously raising additional revenues to reduce the fiscal deficit from 4.4 per cent of GDP in 2013-14 — the final year of the UPA — down to 3.5 per cent by 2016-17, where it has remained in 2017-18. Further reductions are tough. Inflation is likely to edge up to five per cent this fiscal driven by the oil price increase, whilst the fiscal deficit shall increase to four per cent of GDP.

It is unlikely that the new, interim finance minister, Piyush Goyal, will countenance any further deviation from the path of fiscal consolidation, lest it erode India’s credit rating. He is likely to keep inflation in check by adjusting Central taxes on petroleum to avoid the full impact of the oil price spike passing through into retail prices. But this revenue sacrifice will need correspondingly higher collections of income-tax and GST — a task that the present finance secretary Hasmukh Adhia is adept at. Monetising existing infrastructure assets, to get additional fiscal resources this year, will be an extension of what Mr Goyal was already doing as railway minister.

It is not all doom and gloom. The rupee exchange rate has adjusted to more realistic levels as foreign investors reallocate their “hot” money to higher return jurisdictions. This is a blessing. Letting go of the fetish of a strong rupee can boost exports; contain imports; make domestic production more competitive and induce additional flows of long-term foreign direct investment into projects. Higher international oil prices also mean more net inward remittances from our citizens working in the Gulf countries, which will balance the external account.

Quickly implementing the progressive announcements of Budget 2018-19 for agro-processing, liberalisation of domestic agricultural markets and agricultural exports — which has not been in the news since — can illustrate that the government walks the talk on a sustainable doubling of farmer incomes.

Investing more in primary health via well-equipped “wellness centres” and insuring the poor against the ruinous costs of hospitalisation, via Ayushman Bharat, are powerful, scaled-up initiatives, which should be foregrounded.

If the BJP has a long-term economic vision for India, it needs to shun acting in a purely transactional manner in the near term, with an eye to squishing out all political opposition. It has taken the lead at the national level in ensuring probity. Doing the same in the states can show that the BJP rubber is meeting the road.