India as ‘Lynchistan’: Act before it’s too late

There must be many more if India is to shake off the shameful sobriquet of “Lynchistan.” 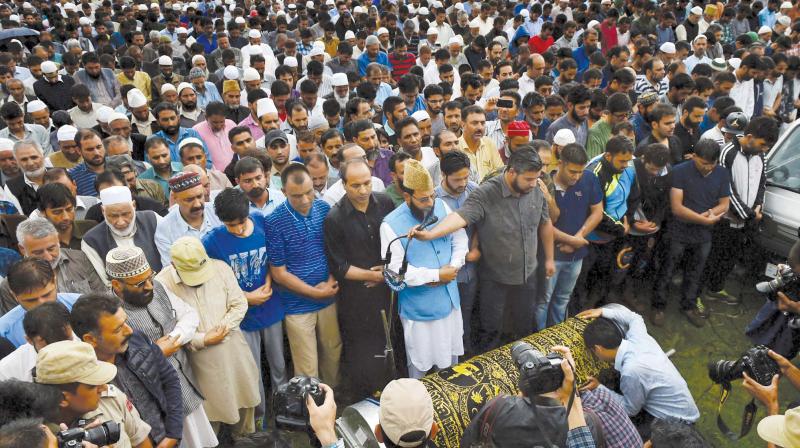 People offer funeral prayers of veteran journalist Shujaat Bukhari at Kreeri in Baramulla district of north Kashmir. Bukhari and his two PSOs were shot dead by gunmen soon after he boarded his car from his office in Press Enclave in Lal Chowk on Thursday. (Photo: PTI )

Manmohan Singh had called the Maoist rebels “the single biggest internal security challenge ever faced by our country”. If Prime Minister Narendra Modi were equally realistic about the state of the nation as his predecessor, he would recognise not just that the assassination of Shujaat Bukhari, editor of Srinagar’s Rising Kashmir newspaper, highlights India’s rapid descent into the violence and anarchy captured by the term “Lynchistan”, but also an increasing narrow-mindedness that refuses to tolerate opposing points of view combined with the belief that brutality in certain causes is condoned.

Since Bukhari was a sober middle of the road journalist, his death was probably the handiwork of separatists, backed by Pakistani terrorists. There’s always a reason of sorts for the most heinous of the spate of lynchings that are reported almost daily. Violence begets violence. What we are suffering from today is the resurgence of primitivism nourished, paradoxically, by sophisticated technology and indirectly by official tolerance of barbarity in selective cases. The dream of “Digital India” has been foisted on people who cannot count. They are running before they can walk. The mind of India cannot rise above ignorance and superstition if myth and legends are invested with far-fetched significance involving plastic surgery and artificial insemination in Vedic times. This bondage to the past which official citing of the epics tacitly encourages explains the mob frenzy and lynchings in Haryana, Rajasthan, Tamil Nadu, Karnataka and Telangana. Such bogus boasting mocks the scientific temper which Jawaharlal Nehru had sought to instil in people.

Rumour plays a large part in disseminating information where poverty and the low level of education restricts access to more reliable sources. Indians long ago had refined the last clause of the old English joke that the three fastest ways of communicating are “telephone, telegram and tell-a-woman” to “tell anyone, man or woman”. The 1857 upsurge was instigated by word of mouth and the mysteriously circulating chapati. Indians learnt of the Emergency’s Turkman Gate demolitions and coerced nasbandi without a single word appearing in print. Videos and text messages warning of attacks accounted for the panic-stricken exodus in 2012 of Northeastern students and workers from Bengaluru, Mumbai, Pune and elsewhere. The circulation on WhatsApp the following year of an old lynching in Pakistan fanned the flames of communal violence in Muzaffarnagar, in which at least 62 people (mainly Muslims) were killed and more than 50,000 were displaced. Technology played an equally important part in instigating the three-day Gujarat pogrom of 2002.

Nowadays, the Internet and cellphones accelerate rumours. Millions of people who are mentally still in the Middle Ages share Facebook postings. There’s the mobile where no other form of social media is available. As Martin Kampchen, a Santiniketan-based German scholar once wrote in Kolkata’s Telegraph, the mobile “is the fulfilment of a primeval Indian desire of ‘being connected’ any time — with one’s family, community and neighbourhood, one’s friends and also with nature and the divine… Never to be alone”.

People learn through these insidious, ubiquitous but anonymous channels that are the gift of modern technology that someone somewhere has killed or stolen a cow. They hear that someone knows someone who has heard that children have been kidnapped from a nearby village and either been circumcised and converted or sold into prostitution or slavery. Both fears loom large in the national subconscious; both speak of the atavistic horrors that haunted our pre-urban — pre-British, Nirad C. Chaudhuri would have said — existence.

Seven villagers were beaten to death in Jharkhand last year on suspicion of child-lifting. Two innocent young men, Nilotpal Das and Abhijeet Nath, were battered to death on June 8 in Assam’s Karbi Anglong district. Behind the fear of kidnappers lay a complex history of local interests and grievances. Karbi Anglong is where rhinoceroses take refuge from floods, and killing them for the horn is big business. There are reports, too, of friction with the police over illegal stone quarrying. Ancient ethnic conflict between Ahomiyas and Karbis, the latter’s dormant but not dead statehood demand, Assamese neuroses about outsiders and “infiltrators”, the divide between the rich and the poor, and the long dreadlocks that one of the victims sported, may all have contributed to their being singled out as the Other. For whatever reason, the police always seems to be far away and slow to arrive.

There’s another category of crime that is more directly connected to folk faith and practices where the official machinery is even more negligent. Twenty-six-year-old Parashuram Waghmore from Pune, who is accused of shooting Gauri Lankesh, the determinedly secular editor of Gauri Lankesh Patrike magazine, on September 5, 2017 reportedly confessed to the police that he knew nothing about his victim except that she was the enemy of his religion which he wanted to save. The sensational killings of rationalists like Narendra Bhabholkar, Govind Pansare and M.M. Kalaburgi, all well-known in leftist intellectual circles, are attributed to the same fundamentalist network that is said to have indoctrinated and used Waghmore.

The angry mob that lynched two Muslim men suspected of stealing cattle in Jharkhand’s Godda district last week may have drawn encouragement from two factors. First, legal exaltation of the sanctity of cattle like the Gujarat law that punishes cow slaughter with 14 years in jail. Second, police indifference and the law’s delays create the impression that no matter what Mr Modi might say, gau rakshaks enjoy official protection. A Jharkhand fast track court’s conviction three months ago of 11 men, including a district BJP leader and local gau raksha samiti members, for killing Alimuddin Asgar Ansari, a meat trader in Ramgarh, marked a first. It’s the only such conviction.

There must be many more if India is to shake off the shameful sobriquet of “Lynchistan.”