Export orientation is a quality and time conscious eco-system which hinges on becoming part of global supply chains. 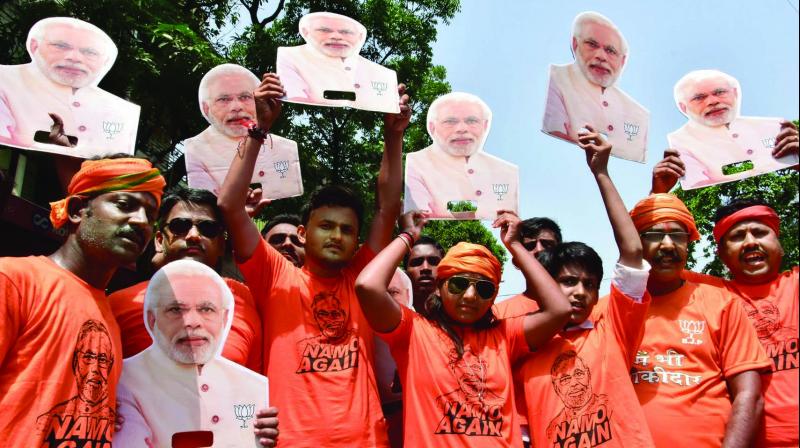 Part of the resounding success of Modi 1.0 was that it was branded as an efficient deliverer of public services. The awesome, mammoth machine of the BJP —with faithful help from the Rashtriya Swayamsevak Sangh (RSS) — requires nothing more from citizens than to go about their work quietly, pay their taxes diligently and show their appreciation by voting for them every five years. (Photo: PTI)

We are all of the “buy and forget” generation, which expects not to be distracted from its primary focus — be it mere survival or amassing wealth; remaining young for ever; spirituality; saving the planet from self-destruction or just  studying to score a perfect 100 per cent in the exams. This extreme focus leaves little time for peripheral activities  like fiddling around with a motor vehicle or worrying about utility services — like clean air, drinking water, electricity, a clean street outside one’s home, an efficient garbage collection system, functional markets, worrying about personal security or the state of the nation. All this we leave to the State to provide.

Part of the resounding success of Modi 1.0 was that it was branded as an efficient deliverer of public services. The awesome, mammoth machine of the BJP —with faithful help from the Rashtriya Swayamsevak Sangh (RSS) — requires nothing more from citizens than to go about their work quietly, pay their taxes diligently and show their appreciation by voting for them every five years. A perfect “Main hu naa for everything else” option for the “Vote and Forget” generation.

The BJP’s plan to have simultaneous polls — currently for Parliament and the state Assemblies, but eventually even for local governments — aligns with this trend. Press one button and vote for government at all levels. Voters might buy this extended “value proposition” over time, though the Assembly elections late last year played spoilsport, if seen as a voter preference for competition and choice at each level of government. The coming state Assembly elections in Haryana, Maharashtra and Delhi will enlighten us further on a change, if any, in voter preference between competitive choice and the quiet comfort of the familiar.

Modi 2.0 aims to offers a giant, political supermarket where voters can get all their public service needs. But remember that supermarkets need deep pockets or sufficient revenues to stock the right products. We have never had deep pockets, and neither did Modi 1.0 achieve the desired revenues. Sensibly, the government did not opt for the potentially destabilising option of increasing borrowing to plug the revenue gap. Revenue shortage has affected investments and led to cutbacks in services. Can the BJP PoliticalMart do smarter revenue management?

Our macro-economic stability is delicately poised on the price of petro-fuel. A price rise in imported petro products destabilises both our foreign currency balances and domestic tax revenues. The Union and the state governments tax petro products heavily. If their landed price — we import 80 per cent of our need — increases, we risk triggering inflation if the tax on these products is not reduced.

Sustainable macro-economic security requires that we either boost our own production of petro-fuels — unlikely since we lack economically extractable geo-resources on the required scale — or to boost our exports.

Sadly, today most of our products are not export competitive, including apples from Himachal Pradesh and Uttarakhand, which cannot match the quality and price of imports from the United States. The same goes for Indian tourist destinations. Cost-cum-quality conscious Indians find it cheaper and better to frolic in Thailand, Bali and Sri Lanka than in Goa, Kovalam or the Andaman and Nicobar Islands.

Our growing, massive domestic market makes it more attractive for Indian entrepreneurs to agitate for tariff walls and book profits by supplying domestically, rather than risk the many vagaries of external markets. Admittedly, large economies are rarely large exporters relative to their GDP. But we have no option. Our exports have been flat over Modi 1.0.

Modi 2.0 must export to generate foreign exchange surpluses or at the very least eliminate our current account deficit (CAD) — jargon for the difference between earning and payments (including interest) in foreign exchange, other than the net receipt of capital. The gap is around three per cent of GDP.

Plugging the gap is not impossible. We already have a surplus in the export-import of services on the back of low cost skilled techie workers in India. Exports exceed imports by 20 per cent. The persistent problem is in the export of goods — technically called merchandise trade — where the reverse is true. Our exports are just 60 per cent of imports.

Increasing non-conventional service exports - design, consulting and receipts from patents - should be a key area for incentives and the systematic use of diplomatic heft.

Second, early returns are also possible in agriculture, if the Union government commits to end all quantity controls on agri-exports in the upcoming Budget 2020. Correcting the export-control raj — a holdover from the food shortages of the 1960s — can boost exports at no extra cost. India already spends nearly two per cent of GDP on supporting agricultural productivity. This is wasted by supplying primarily to the domestic market. The resultant excessive food stocks — we have 60 per cent more than necessary for a buffer —depress domestic prices and get degraded during storages.

Export orientation is a quality and time conscious eco-system which hinges on becoming part of global supply chains. It cannot coexist with arcane, administered, quantity and tariff controls on exports.

Imagine our situation if previous governments had taken the view that due to a skills shortage, we should not allow the export of workers or services. Our foreign exchange receipts would be lower by more than $250 billion, or 1.2 per cent of GDP. We should similarly end the discrimination against the export of agricultural products.

Other than stabilising the macro-economy, exports also add to “good jobs” and economic growth. Both these have been scarce in Modi 1.0. Economist Rakesh Mohan says relying on a drawdown of the RBI’s reserves is not a sustainable solution for bridging the revenue gap. He advocates a hard push for rekindling growth. I would add that Modi 2.0 should push for agri-exports and growth to solve the twin problems of the foreign exchange balance sheet and the revenue deficit in the government’s account.

India needs to abandon its persistent export pessimism and belief in intrusive, physical controls, which hark back to the Second World War when the British ruled India. Even they abandoned such controls more than four decades ago. If nothing else, we should copy them.