The Gandhis are now in a dilemma. Their stated position of opposing anyone having truck with the BJP is compromised 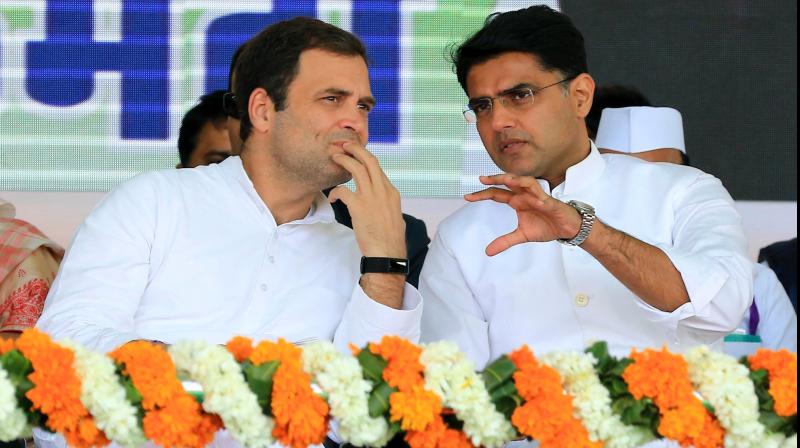 In this file photo the rebel Congress leader Sachin Pilot (R) is seen with the then Congress President Rahul Gandhi during a rally in Jaipur. PTI Photo

The sordid bid to topple the Rajasthan government has exposed the worst in both the Congress party and the BJP.

Going by the confessions, the inspired leaks and the whispers, it is clear that chief minister Ashok Gehlot has not been on talking terms with his deputy, Sachin Pilot, since December 2018.

But Gehlot apparently had a line of communication with the former maharani of Dholpur and princess of Gwalior, Vasundhara Raje Scindia.

Sources in both the BJP and the Congress reveal that Gehlot was a step ahead of Pilot simply because someone from Vasundhara Raje's side was tipping him off about Pilot’s moves. Gehlot, a former magician, kept gathering information and piling up a dossier that read like a charge-sheet. The crafty Gehlot did not rush to Congress leaders Sonia Gandhi or Rahul Gandhi with this dossier.

A chartered plane was reportedly sent to Thiruvananthapuram to fetch AICC general secretary K.C. Venugopal, a favourite of Rahul; he, in turn, handed over the explosive material to the Gandhis.

The Gandhis are now in a dilemma. Their stated position of opposing anyone having truck with the BJP is compromised as both Gehlot and Pilot were reportedly in touch with the enemy.

Covid-19 has changed a lot in Lutyens’ Delhi. In the Raksha Rajya Mantri’s office for instance, defence ministry personnel are not encouraged to visit unless they are summoned.

The informal list of do’s and don’ts at Dr Subhash Bhamre’s office also demands that officers remain seated each time the minister walks in or out.

Baluni is recovering from cancer so the sympathy factor also came into play. Puri’s statement that Priyanka tried seeking an extension was quickly denied by the AICC general secretary but it may have a grain of truth.

Apparently, without Priyanka’s knowledge or consent, Anand Sharma or K.T.S. Tulsi are suspected to have spoken to Puri even while Priyanka was all set to move out of Lodhi Estate.

The additional secretary rank babu tested positive for the coronavirus. Everyone, including Chaudhary, had to while away time in home quarantine — other than a BJP notable who is said to have ignored the advice.

While the Ashok Gehlot-Sachin Pilot tussle has stressed out a section of the Congress party, some public relations companies are gloating. A prominent Delhi-based PR person, known to have near-perfect relations with many politicians, quickly grabbed Gehlot’s account.

Every morning, scribes and talking heads on TV covering the Rajasthan slugfest have been getting a healthy dose of talking points on WhatsApp. Pilot’s side is not sitting idle. Last heard, Pilot, an accomplished pistol shooter, has engaged some fine PR personalities. They are not missing the target either.