Heritage and history need to be respected, even by those determined to rewrite both 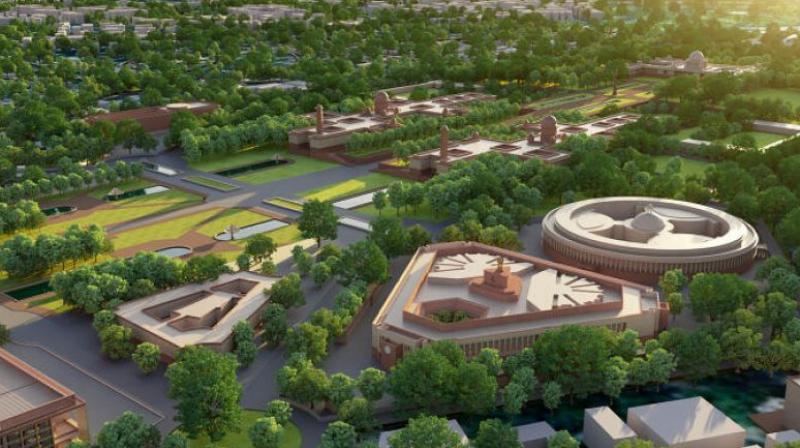 Abhishek “Manu” Singhvi used a lovely phrase the other evening, as he responded to questions on a prime time television show. The topic was the prompt go ahead given to the construction of a brand new Parliament House building. He called it the ‘Politics of Zidd”. To that, let me humbly add, it can also be called the “Politics of Ego”. Never before in the history of India have we witnessed such a display of egotism.

The new Parliament House will be the ultimate symbol of a government that only and exclusively thinks of its own grandeur and brand positioning -- a monumental error is being made by men with monumental egos who have not bothered to consult their countrymen before sanctioning such a project. An announcement says the contract will be awarded to an infrastructure major after the mandatory scrutiny. This is hardly the point. Whosoever bags the contract (CPWD’s estimated cost is Rs 899 crore) will no doubt do a competent job and create a handsome house for our parliamentarians.

The more important question is this: does India need a swanky new Parliament House? For what? Beyond the redundancy of the project looms an even larger issue — and I am not going into the delicate debate about propriety. Why was no thought invested in ecological concerns?

At a time when the whole world is thinking of what is good for the planet, now that we know our post-pandemic priorities a little better and are acutely aware of how arrogantly we have abused our precious ecosystems — should this grand plan still be on? It involves stripping prime urban areas in central Delhi of tree cover and creating havoc with a whole host of other concerns.

But here is an administration merrily going ahead and building on a precinct that is stunningly beautiful and aesthetically perfect the way it is. The way it has been for 85 years. People from all over the world come here to admire the architectural beauty of Rajpath. To think it is going to be marred by an ill-conceived proposal, hastily pushed through by those in an obvious hurry to create a different “legacy” for future generations.

What sort of a “legacy” is this? The young are far more engaged with global crises — environmental issues top their list. Delhi remains one of the worst polluted cities in the world. Adding to the terrible air over the capital will be the construction of this controversial building.

A timeline of 24 months is in place — which must be a record of sorts. The timeline is not arbitrary. Nothing that the Narendra Modi government undertakes can be viewed in isolation. Take the design elements for one -- there will be shlokas inscribed on the walls. Surprise! Surprise! Shlokas. Read the writing on the walls, folks. Oh yes, instead of the original tall spur atop the monument, it’s now going to be a gigantic national emblem. No quarrel with that. Approvals for the Central Vista project? Ummmm… no problem, boss. Those will be given phataphat. Those who have any issues with the plan — well, too bad. Cribbing will get you nowhere.

The timing to get this project up and running is incredibly insensitive. Forget the tanking of our economy during the pandemic -- so many countries are dealing with Covid-driven economic crises. But here in our own backyard, we have a prime minister admitting his government does not possess the data on the deaths of migrants -- how many died on those roads, desperately attempting to reach their distant villages on foot. India is still reeling from Covid deaths, with experts telling us we have not peaked so far. Health remains one of our biggest concerns, with countless Covid centres falling short of oxygen cylinders and ICU beds. Can we really afford to spend on a new Parliament House during such dark and dire times?

For all the proclamations of austerity and simple living, what citizens have seen is the arrogant strut of the peacock. Nobody in the PM’s circle lives modestly. Not even the PM himself. Crores of taxpayers’ hard-earned money is spent on ensuring our elected representatives live life kingsize -- with sprawling homes and lavish perks. Nobody grudges them their indulgences. Citizens are large hearted enough to say, “Be comfortable -- khao, peeyo, jiyo.”

But hello! Spare a thought for us, less privileged beings too. By digging up those beautiful lawns to build this House of Vanity  is like rubbing our noses into the dirt thrown up by bulldozers uprooting magnificent trees and going into the bowels of what is public property -- which rightfully belongs to all of us.

Narendra Modi celebrated a landmark birthday this week. He turned 70 -- an excellent age for reflection and introspection. One wonders what his conscience tells him when he presides over such a redundant project, using resources India can barely afford to fritter away at this critical stage. Heritage and history need to be respected, even by those determined to rewrite both.

The magnificence of Rajpath cannot be arbitrarily trifled with, based on the whims of politicians in power. Ironically, India lost one of its most valued cultural doyennes during the same week, on September 16.

Kapila Vatsyayan was the grande dame of India’s glorious cultural heritage. A formidable intellectual and a highly respected scholar who authored 20 books. She passed away at the age of 91. Her obituaries were tucked away into obscure corners of our dailies. The front page was reserved for more “important” news -- like Tata Projects Ltd emerging as the lowest bidder for the new Parliament House building project, beating Larsen & Toubro to it by a whisker. Hurrah! Says something about shifting perspectives, doesn’t it?