A relentless war rages on in the Middle East

Turkish forces have moved into northern Syria, and the shaky Kurdish-defended buffer zone has become the site of mayhem. 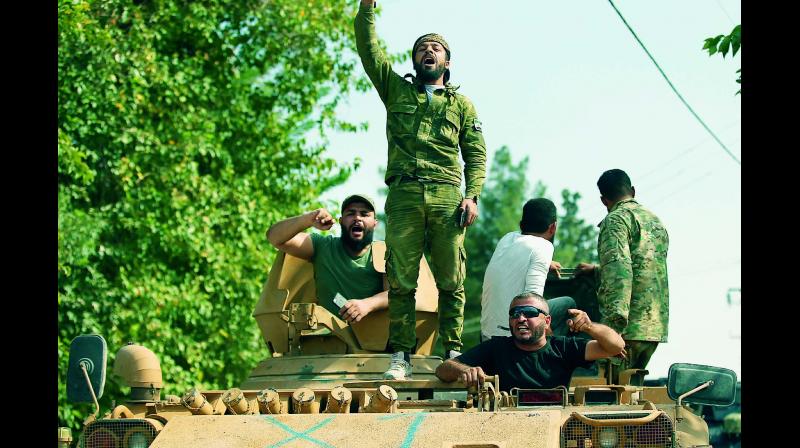 People want to stay. I don’t want to stay. We were supposed to be in Syria for 30 days.” So declared an ever-belligerent President Donald Trump who was elected on the promise of bringing American troops back home. Thwarted in realising his other electoral promises — the border wall, a repeal of the Obama-era healthcare bill — he seems inordinately committed to this one.

In the days since, the expected has happened. Turkish forces have moved into northern Syria, and the shaky Kurdish-defended buffer zone has become the site of mayhem. The Kurds have been abandoned and left to die; it is not for the first time that an American ally has suffered such a fate.

Those, however, are the details of realpolitik. On the ground, the US decision has exposed the suffering of those always left behind after the blood and bombs are gone. The wives and children of the self-styled Islamic State (IS) fighters caught and detained by Kurdish forces in various refugee camps such as Ayn Issa and Al-Hawl face fewer guards. Unsurprisingly, in Ayn Issa, over 700 women and children are said to have broken out of detention. Western governments, ever terrified of thousands of what some media sources are calling “IS elements”, have consoled themselves with the feeble reminder that the camps where the breakouts have occurred are not the ones that housed the most dangerous IS fighters.

Whatever they may say, the region where a frail peace reigned has been thrown into chaos once more. The Trump administration’s decision to withdraw from northern Syria was at least in part motivated by the fact that the US and Kurdish troops that were guarding IS-linked women and children did not know what to do with them. Despite the fact that several hundreds of them carry passports of Western nations, countries like Germany, France and the UK amongst others have been refusing to take them back. The premise for their refusal is that if they returned, they would pose a threat to their own populations.

The most famous of these cases has been that of the British-born Shamima Begum, who left the UK to join the IS as a teenager. Some time ago, Shamima Begum appealed to the United Kingdom government to take her and her newborn son back. The UK refused and in the interim the baby died in the dire conditions of the camp.

The situation illustrates just how facile the entire plan regarding IS remnants has been. The premise that Kurdish forces could run the camps and keep the people in them from reorganising into IS-type groups was a foolish one. Even before the US decided to withdraw, there were reports of women who had been members of the Al-Khansaa Brigade trying to impose some semblance of order in the wild and lawless environment of the camps.

The US leadership, whether it is the military top brass or Trump himself, have been itching to declare victory over the IS ever since their incursions into Syria began three years ago.

It could even be that the current withdrawal is taking place not because the ever testy Trump was fed-up of the Syrian/IS issue but because they assessed that their “victory” over the IS would be difficult to sustain anyway. The days before the announcement saw increased lawlessness in the camps, likely increasing the costs of continuing to pay Kurdish fighters to keep maintaining the status quo.

As has been the case in Afghanistan, the US may have come to the conclusion that propping up the Kurds (like propping up pro-American leadership in Kabul) was simply too expensive a proposition to be continued indefinitely. Add to this the approaching election year and the general turn-off the American electorate finds war to now be, and it adds up to the wrapping up of ill-considered wars whose splintered interests will now have to fight out battles over the ruined towns and cities that are left behind.

On Monday, the United States ordered economic sanctions against Turkey as a supposed chastisement against the Turkish incursion into Syria. This was not a surprise, functioning less as a deterrent for Turkey and more as a face-saving measure for the US. And yet, whomsoever one chooses to support in this play of smoke and mirrors, one inalienable reality remains: the Middle East that was even as recently as the beginning of this millennium is no more, gone forever as war is followed by war and more war.