The BJP cannot hope to be complacent with its victory, and Congress need not be despondent. 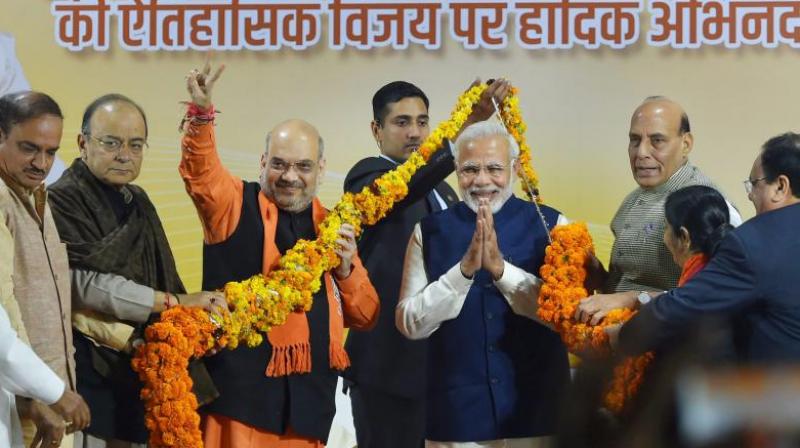 The BJP’s sixth consecutive victory in Gujarat comes with a few riddles, while the Congress’ defeat brings its own solace. It would be easy to argue that there are no consolation prizes in elections, and that there are only winners and losers, and that the BJP is a clear winner and the Congress a clear loser. Politics is a little more complicated than that. The BJP cannot hope to be complacent with its victory, and Congress need not be despondent.

It seems clear it’s a victory for Prime Minister Narendra Modi, though it’s a qualified and limited victory. A majority of Gujarat’s voters, it seems, didn’t let down a fellow Gujarati who is the nation’s Prime Minister. They didn’t want to throw out the Prime Minister’s party though they had every reason to do so. The loyalty shown by the Gujarati voter to Mr Modi is quite touching because Mr Modi abandoned his seat from Gujarat in the Lok Sabha and retained his seat from Uttar Pradesh, Varanasi. In a way, the voter in the state has forgiven the betrayal of Mr Modi. As a matter of fact, the BJP’s victory is really a consolation prize for the party. There is little doubt that Mr Modi stooped to melodramatic, maudlin levels — saying that voters in Gujarat should avenge the many insults that have thrown at him by his Congress opponents, a clear reference to the pungent remark of now-suspended Congress member Mani Shankar Aiyar about Mr Modi being a “neech” (lowly) kind of person — to retrieve the situation which seemed to be slipping out of control. His appeal for votes was not so much on the BJP’s programmes. It seems there was not much either Mr Modi or the party had to say. The party’s manifesto seems to have been an afterthought and it was released in a hurried and unthinking manner, a day before the first phase of voting on December 9. He made it a personalised issue. It can be said that Mr Modi has won and the BJP has taken a beating.

It remains a puzzle as to why the Gujarati voter has opted for the BJP for so long because the claims of development made by Mr Modi and his party do not survive scrutiny. There is no such thing as the “Gujarat model” because the economy of the state is complex and riddled with contradictions, and these problems are not unique to the state. The BJP’s partisans have tried to argue the case for a non-existing “Gujarat model”. The economy is running on its own momentum and has little to do with the interventionist policies of Mr Modi as chief minister and Prime Minister. The failure of the Tatas’ Nano project is an interesting example. Gujarat plays no great role in the overall economic growth rate of the country because it is a moderately-sized state in terms of population and economy. It can’t be expected to play the leading role. The Gujarati entrepreneurs and tycoons who seem to exemplify the success of the Indian economy operate outside Gujarat, including the Tatas and Ambanis.

That leaves us with the question whether the BJP’s Hindutva ideology is the secret behind the party’s unmatched electoral success in the state. There is a temptation to believe this is so, and secular partisans will dredge out enough anecdotal evidence to prove the point. But it seems Hindutva is past its expiry date, and the BJP seems to be aware of it. The Hindu communal bias is certainly writ large on the social psyche of the people in the state but it predates the emergence of the BJP as the dominant political force. And after 22 years of BJP rule, it has no special attraction for the people.

The Congress, which is the only other major political party, has failed to articulate a compelling political and economic programme for the state. Promising reservations, the old gambit, just doesn’t seem to work in Gujarat any more. The reason for the BJP’s sustained victories is because there has been political stability in the state. The intra-party tussles which characterised Congress governments, and which led to manipulated social tensions, have disappeared.

The Congress has once again tried to take advantage of caste divisions by supporting Patidar and Dalit causes, and backing claimants to the leadership of the groups, which pointed to future conflicts.

The Congress will have to abandon its caste calculus if it wants to make  headway in Gujarat or elsewhere. The Other Backward Classes (OBCs) and Scheduled Tribes (STs) in Gujarat, who form the BJP’s “Hindutva” backbone, had a numerically larger base, and the BJP had mobilised it.

There was some justification for Mr Modi to have fallen back on the emotive “Gujarati asmita” to counter Rahul Gandhi’s bid to wean away dominant castes and communities. The BJP, then, is surviving as the top dog in state politics because the Congress has failed.

The other interesting political fact about Gujarat is that both major parties in the state have garnered more than 40 per cent voteshare, with the BJP nearing the 50 per cent mark. It shows there is a large chunk which is not enamoured of either Mr Modi or the BJP.

To speak of the Modi charisma and Modi magic to explain the Gujarat victory would be a lame explanation. The people of Gujarat are just weighing their options. There is an indication that the state is ready for the emergence of a third force, but it must be on the lines of the now-forgotten Swatantra Party, with a rightist economic programme. The BJP and Congress resemble each other in their jaded populism.